Tran Quoc Pagoda located by Thanh Nien Road has a history of about 1400 years, which is the oldest temple in Thang Long – Hanoi in particular and in Vietnam in general.

According to legend, the pagoda was built under Ly Nam De’s reign (544-548) associated with Van Xuan State. The name Khai Quoc (Found the Nation) of the pagoda originated from this period of time. Later, King Le Thai Tong (1434 – 1442) changed the name to An Quoc (Secure the Nation). 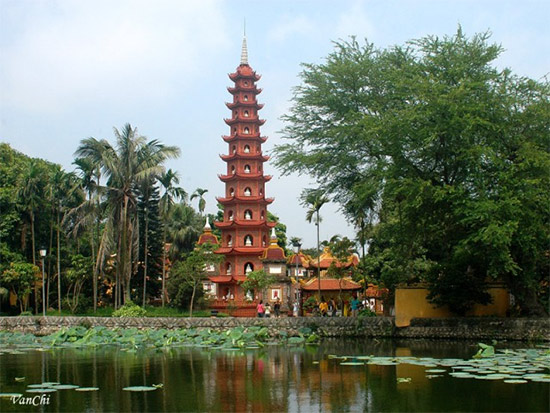 At first the pagoda was situated on the land in middle of Red River. In 1616, the land cracked and the pagoda was moved to a small island called Kim Ngu (Golden Fish Island) in the middle of West Lake. West Lake has been a famous beauty spot of Thang Long. Kings and mandarins built palaces around the lake to rest and go sightseeing. The place where the pagoda was moved to used to the place for building Thuy Hoa Palace under Ly Dynasty and Han Nguyen Palace under Tran Dynasty.

Right after the pagoda was moved to Kim Ngu Island, there was no way to enter the pagoda. The pagoda was surrounded by West Lake and the only way to go into the pagoda was by boat. In 1642, after building the dam Cố Ngư, known as Cổ Ngư or Thanh Nien Street at the present which separated West Lake and Truc Bach Lake, An Hoa villagers built the upper palace, incense burning area, dug trenches around and built a small road connecting the pagoda with Thanh Nien Street,etc. Since then, the pagoda was named Tran Quoc (Protect the Nation); that was in 1628 under King Le Than Tong’s reign. The 14 precious plaques in the pagoda was full description of the course of building and restoration of the pagoda. Old documents also say that the place had many prominent monks – such as Monk Khuong Viet under Dinh – Le Dynasty (10th century), Monk Thao Duong in 11th century who took charge of the pagoda and founded a new sect – Thao Duong Sect. King Ly Thanh Tong (1055 – 1072) was one of the first generation of this Sect.

Tran Quoc Pagoda still preserved a fairly complete system of statues. Notably, among the Buddhist statues in the pagoda, there are Three Sages and ancestor monks of the pagoda. Specifically, the pagoda has a statue of Buddha entering Nirvana that folk often calls Reclining Buddha which was rarely seen in northern pagodas but mainly seen in Laos or Thailand.

Tran Quoc Pagoda also preserved many poems and parallel sentences of kings and mandarins under Nguyen Dynasty praising the scenery. Under French domination, Ancient Far East Institute painstakingly studied this ancient pagoda which used to be ranked as historical construction No. 10 in the whole Indochinese region, one of the country’s 12 major monuments ranked in the first round in 1962 by the Ministry of Culture and Information. 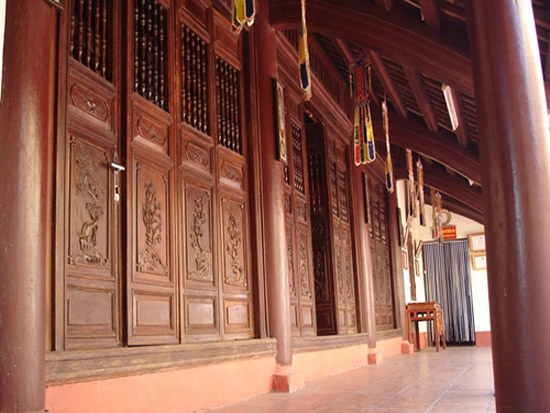 Over thousands of years, due to the destruction of the nature, some constructions of the pagoda have deteriorated such as the main hall, house of worship, the steeple, the corridor, etc. in the morning of December 5th, Buddhist Association of Hanoi held the inauguration ceremony of restoration and embellishment constructions of Tran Quoc Pagoda after more than 6 months of execution.

The restoration began on 3/6/2011; hundreds of cubic meter of wooden components damaged by termites were replaced with iron wood in accordance with the dimensions and the old patterns ensuring conservation requirements of old cultures. The entire old damaged tiles were replaced; the roads to the House of worship and Main Hall were tiled.

Today, West Lake is an entertainment place for the residents in the capital. There are alot of shops which are crowded all the day; however, Tran Quoc Pagoda retains a private space of tranquility which is the trace of Buddhist culture from the time of Thang Long the ancient city, attracting many Buddhists to worship and domestic and foreign tourists to visit.