In 1592, after defeating the Mac out of Thang Long, Nguyen Quyen suggested Trinh Tung to flatten citadels, rampart and moat system built by the Mac. At that time, Thang Long became the unique Imperial City in the world. Any capital of the country was always protected by ramparts and moat systems. Thus, according to historians, the expedient of Nguyen Quyen, ostensibly against the Mac, but actually helped the Mac with easier conditions when they were strong enough to get back Thang Long. However, during the 157 years Thang Long was not protected with ramparts and moats, the Mac was not able to regain the kingship. The throne still belonged to the Le, with the shared power of Lord Trinh. 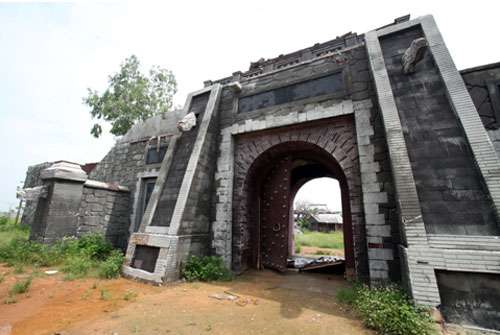 In 1749, the uprising of peasants revolted all over the country, directly threatened Thang Long Imperial Citadel. Under the circumstance, Lord Trinh Doanh ordered to build a new system of ramparts, named Dai Do, basing on traces of the old Dai La Citadel. Dai La Citadel had eight gates, guarded by soldiers to protect the Citadel all the day.

Dai Do Citadel built by Lord Trinh was much smaller than the ramparts under the Mac. The large area, such as surrounding of West Lake, and the “thirteen camps” area became suburbs. Dai Do Citadel under Trinh Doanh time did not include those large areas.

Based on the marks of the gates and the surrounding dike in the east of the Imperial City, which existed until the late nineteenth century, historians think that the eastern side of Dai Do Citadel was from Yen Phu to Ben Nua, along Nguyen Huu Huan, Ly Thai To, Le Thanh Tong, Hang Chuoi Streets today, connected to the southern side. Southern side runs through the Black Bridge, O Cho Dua. The western side was also rebuilt in Yen Hoa without running through Nhat Chieu (Nhat Tan) like the citadel under the Mac’s reign. In other words, Dai Do was almost triangular, embracing the the Imperial Citadel dedicated to the king, the royal family and the court and the Lord Trinh’s palaces located in the east of Hoan Kiem Lake today.

As described by Le Huu Trac in 1782 – 1783 in the works “Thuong Kinh ky su” (The chronicle of the journey to the royal city)”, Dai Do Citadel was “a range of not so high land ramparts, next to a small wall with a horse road on the surface, surrounded by a bamboo fence. At the foot of the wall, there was a deep moat with spikes which seemed very solid. The citadel had three watchtowers, guarded by soldiers with guns and swords”. That was Vu Quan Gate (now a part of O Cho Dua area).

As mentioned above, Dai Do had eight doors with auxiliary doors at the two sides. Thus, Dai Do was connected with 16 doors. Most of the 16 doors were destroyed. However, fortunately, O Quan Chuong door (before called Dong Ha) was still preserved to this day. This door is now located at the O Quan Chuong street, Hang Chieu Street, near to the foot of the Chuong Duong Bridge.