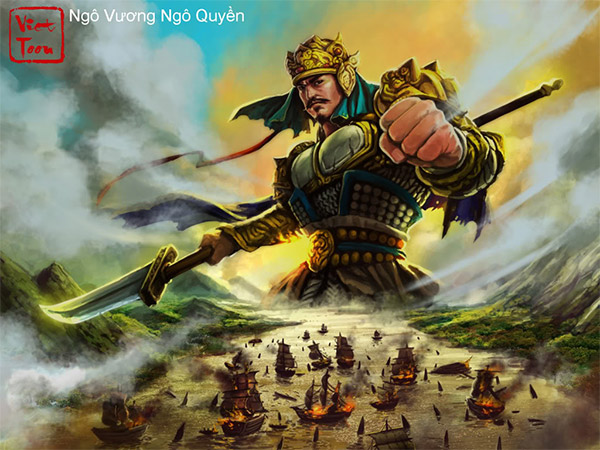 He was the son of Ngo Man, an influential mandarin official in Duong Lam commune, his Ngo surname is a local influential and patrician family.

The legend has it that, when Ngo Quyen was born, he had three beauty spots on his back. A physiognomist saw and guessed that he can become a lord-over of the region, hence he was named Quyen. Ngo Quyen look handsome, “lightning-bright eyes, leisurely walk like a tiger”, “he had unrivalled health”.

Ngo Quyen’s boyhood was also the stormy period of Duong’s domination in An Nam. An Nam mandarin increasingly proved incapable of controlling the local forces as well as the external forces. Nam Chieu people had onslaught  with Giao Chau from the year 858 to 866. After disturbance of An Su (755 – 763) and especially revolt of Hoang Sao (874-884), Duong dynasty have to deal with victims of division into feudal realms, the control of the central mandarin for An Nam is increasingly weaker. The power of the mandarin was dispersed into small areas, so it appeared the village notables who played an increasingly important role in the governance apparatus. Therefore, Khuc family, Hong Chau village notable have established a self-control mandarin in An Nam easily and without much disturbance in the year 905. Khuc family’s forces was weak, confrontative and defeated by the invasion of Nam Han dynasty. But Nam Han’s dominance was not sustainable: in 931, Duong family’s forces in Ai Chau defeated Nam Han dynasty’s mandarin officials as Ly Tien, Tran Bao at the foot of Dai La citadel, Duong Dinh Nghe became a governor of self-control Vietnamese’s mandarin.

Domination of Duong family’s force in Dai La was supported by many other local forces, including Ngo family of Ngo Quyen.

The history described that Ngo Quyen was a talent hero, “having wisdom and courage”. After marriage with Duong Dinh Nghe’s daughter whose name is Duong Thi, Duong Tam Kha’s younger sister, Ngo Quyen became a general and son-in-law of Duong Dinh Nghe, trusted and assigned by the governor to manage Ai Chau, basic land of Duong family in the year 932.

In 937, Kieu Cong Tien,  village notable of Phong Chau, murdered Duong Dinh Nghe and became a final Tinh Hai Quan governor in the Self-control period. But the new governor had not firm political support. His scramble for power was protested by many local forces and even Kieu family’s internal force was also separated seriously. In segregation, Kieu Cong Tien hastily asked Nam Han dynasty for help.

Ngo Quyen and His Historical Victory at Bach Dang river

On days of the Winter of Mau Tuat year (938), from Ai Chau, Ngo Quyen led his troops to the North to punish the traitor Kieu Cong Tien.

When internal strife finished, Ngo Quyen went to the citadel to meet with the generals to discuss the plans against invasion. Dai La citadel became the nerve- center of the war against Nam Han for the second time. Heroes from the four direction led their troops to Dai La under the righteous flag of national hero Ngo Quyen. Here, an ingenious fight and victorious plan was discussed and approved by Ngo Quyen and the generals. In a meeting, Ngo Quyen, with confidence and self-control, expressed his opinion as follows:

“Hoang Thao is such a foolish child, leading his troops from the far land, his soldiers were still tired, eventually they completely feared when they heard that Cong Tien was killed and there were no information about the situations happened right here. Our troops are strong, the enemy is weak, we can surely victory this war. But they have an advantage at warships, if we don’t plan our defend first, we don’t know who will control the battle. If we order to place the iron-headed stakes under the water of the sea gate, their ships will follow the tide of sea into the poles, then we can easily dominate them without letting any ships of their escaped, it is the best plan”. The plan and selection of the battlefield for the “strategic battle” has been decided. The Generals and officers were happy and believed the victory. Then, Ngo Quyen and the headquarter temporarily left Dai La citadel, led the troops to the northeast coastal region to prepare the battlefield for the battle with Nam Han enemy.

According to the stories of the gods and the legend from generation to generation among the common people, villages and over 30 temples to Ngo Quyen and the generals defeating Nam Han enemy have been discovered, Ngo Quyen’s garrison was from villages Binh Kieu, Ha Doan to Luong Khe, the general headquarter located at hamlets Luong Sam, Gia Vien (all under An Hai district, Hai Phong).

Formerly, most troops of Ngo Quyen were Ai Chau people, where he governed. Upon Nam Han enemy’s aggression, these troops were added and strengthened quickly. People everywhere enthusiastically brought weapons, warships to join and support the troops. Only a Gia Vien hamlet where Ngo Quyen located the general headquarters also had some tens of young men under the command of Dao Nhuan and Nguyen Tat To voluntarily joined in the army.

River gate region and upstream region of Bach Dang river selected by Ngo Quyen to be a decisive battle.

Bach Dang river is gateway in the Northwest and an important traffic from the Eastern sea to Viet’s land. Following Nam Trieu gateway into Bach Dang, the enemy could go to Co Loa citadel or Dai La citadel by river way. Bach Dang river flows through a rugged and mountainous area, there are many tributaries flowing into. Bach Dang river’s downstream is low, is affected strongly by tide. Tide rises from midnight to the morning. Seagate is vast, its water spreads on both sides of more than 2km. Near noon, the tide pulls up strongly and runs very fast.