To the sixteenth century, the history of Vietnam began a turbulent period with the war among different feudal corporations for power struggle; the country was always in a state of confusion and chaos. Co Loa was adjacent to the capital, so it was badly affected by fluctuations in the history. 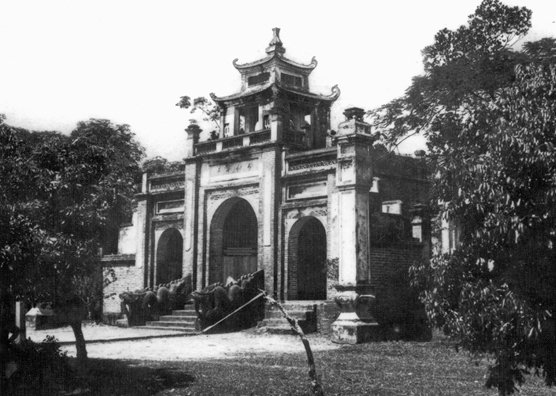 While still under the reign of the Le Dynasty, Mac Dang Dung led the military to crack down on rebel forces here many times and there were failures. Until 1525, Dong Ngan in Kinh Bac was almost stabilized. However, many other forces continued to emerge in Co Loa in the infancy of the Mac. Under the reign of Le Trung Hung, the Trinh also organized many attacks to put down the rebel forces in this area, etc. So, along the length of the XVI century, Kinh Bac in general and Dong Ngan in particular were a volatile place with wars and famine. At the moment, Co Loa was a village in the Dong Ngan District and could not escape from the vortex of intense volatility.

These fluctuations also remained traces in Co Loa folk consciousness to this day. Co Loa village legend has it that “under the Le disorder, the Mac revolted; 18 people performing rites in Thuong Temple carried King Le (?) to hide in the temple, avoiding the pursuit of the Mac military. Thus, in order to punish the village, the Mac “changed the direction of Thuong Temple”, forcing Co Loa people drifting away”. Although the legend was a little different from the royal history, it can be seen that Co Loa was one of the districts in Dong Ngan which supported pro-Le forces to kill the Mac and when the Mac took the authority, they punished this land. Maybe the punishment was so harsh that Co Loa people were forced to scatter everywhere. The explanation for this incident by folk legend was that because Thuong Temple was rotated and the good layer of earth was cut, the people could not live peacefully and had to leave the village. The rationality of this legend is that, the oldest families in the current Co Loa are also immigrants from other places with a history of several hundred years. These people must have come from other places and settled in Co Loa when the village became deserted because the original population migrated.

The fact that Co Loa was an important area for forces loyal to the Le is also certified by the decree and command of Kings Le – Trinh to the village. The Royal Proclamation in 1679 clearly stated that “He [An Duong Vuong] was straightforward and intelligent, etc. He supported the military to eradicate the Mac and take over the land”. The story of King Thuc Phan An Duong Vuong compiled by Nguyen Binh in 1572 and transcribed by Nguyen Hien in 1736 said that “At that time, (Le Loi rose up in Lam Son), General under the Le Dynasty sent troops to King Thuc temple and prayed the god help them to fight against the enemy successfully. At the midnight, King Thuc warned in the dream, etc. Le Loi acceded to the throne, conferred King Thuc Temple as Supreme God Temple, etc. Later, the god supported Le Trang Tong to regain the country; he chose Co Loa as the main temple of the country.” The details authenticate that Co Loa was an important area of ​​the forces loyal to the King Le rising up against the Mac.

Because of such role of Co Loa at the beginning of the sixteenth century, King Le Trung Hung attached great importance to the area; An Duong Vuong Temple was considered to be the country’s main temple; Co Loa commune residents were exempted from tax collection, mainly for the worship of An Duong Vuong. These were clearly and specifically defined in commands for Co Loa Village in 1645, 1767, 1776 and 1790.

The stone stele Cung phụng sắc lệnh tôn phong chuẩn cấp carved in 1683 at the Thuong Temple also specified that “all residents of Co Loa Commune, Dong Ngan District, Tu Son Prefecture built the stone stele to record the worship of King An Duong Vuong decreed by reigns, etc. 50 hectares of field for worshipping, so that the fate of the nation could last for long.” Co Loa was ordained as a faithful commune; the worship of King An Duong Vuong was considered a great influence work to the ups and downs of the countries. Co Loa in the mind of Kings Le – Trinh was a sacred land.