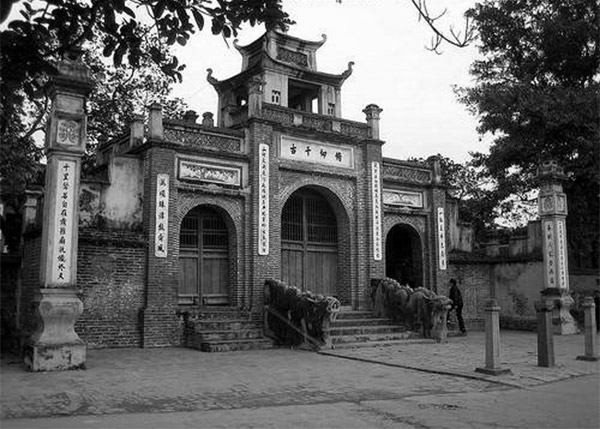 According to the Geography book of Co Loa, during this period, Co Loa acted as a land adjacent to the new capital of the north, no longer the political center of the country. Unlike the ongoing strong construction process in Thang Long – Co Loa entered a process of “ruralization” with the formation of the new villages in the old Citadel. The citadels of the ancient capital no longer functioned as the protection of the court but acted as the system of protecting the village in the process of formation. At the same time, these citadels became a natural boundary to separate villages and hamlets.

Thus, the function of the citadels changed in the process Co Loa transferred from a city to a rural area. The citadel used to hold all three functions, i.e. capital – military – business functions become a ruin with gradually subsided citadel sections and the tale of a majestic and heroic history among folks.

After setting up the capital in Thang Long, Ly dynasty divided the country into 24 provinces and prefectures (lộ – phủ), assigned chiefs of prefectures and urban districts; under prefecture, there were county, township and village levels. At this time, Co Loa belonged to Thien Duc Prefecture, Bac Giang Province (Thien Duc Prefecture was the name of Co Phap Urban District under Tien Le Dynasty).

To the Tran Dynasty, in terms of administrative organization there were some changes compared to the Ly. The Tran extended the range of provinces, in which the number of roads decreased from 24 under the Ly to 12, including Bac Giang province. Bac Giang province under the Tran Dynasty was no more named Thien Duc Prefecture but included 3 urban districts, i.e. Gia Lam, Vu Ninh and Bac Giang with a total of 11 districts. Co Loa under the Tran Dynasty belonged to Dong Ngan District – one of the five districts of Vu Ninh 3 urban district (including Tien Du, Vu Ninh, Dong Ngan, Tu Son and Yen Phong Districts). Old historical documents known to date do not have any notes about Co Loa under the Ly, Tran. During the archaeological excavations carried out in Thuong Temple area – Co Loa in early 2005, archaeologists found a large amount of ceramics under the Tran. This shows that, under the Tran, ceramic craft can be quite developed in this area besides agriculture.

To Early Le Dynasty, the administrative organization of the country continued to change, leading to administrative changes in Co Loa. The Le Dynasty divided the country into 12 đạo thừa tuyên (provinces), changed the province under the Tran to prefecture, changed town to urban district and set up the national map. Bac Giang Prefecture was changed to Kinh Bac. The geological book says that “Kinh Bac has 4 provinces and prefectures, 21 districts and 1,147 villages”, etc. In Kinh Bac during the Le Dynasty, there was not urban district level, but prefecture and district levels. Of the prefectures of Kinh Bac, Tu Son Prefecture had 5 districts, i.e. Dong Ngan, Tien Du, Yen Phong, Que Vo and Vo Giang. Basically, the districts compared to the previous periods did not change. Thus, Co Loa under the Early Le still belonged to Dong Ngan District.

According to the geography book: the “Tu Son prefecture has six districts, including Dong Ngan District which had 88 communes and 1 urban district”. Co Loa was one of the 88 communes of Dong Ngan District, Tu Son prefecture, Kinh Bac. The royal history did not have any more information on this issue; the deity story about Thuc An Duong Vuong compiled by Nguyen Binh in 1572 and transcribed by Nguyen Hien in 1736 said that “Thuc An Duong Vuong acceded to the throne, set up the capital in Co Loa Citadel, in Kinh Bac; the old name was Vu Ninh District, Tu Son Prefecture, Yen Phong District, Phong Khe camps (before belonging to Yen Phong); later it was renamed Kim Lu (Dong Ngan District) and Co Loa. The names of the areas recorded in deity stories were the name of those areas at the time of writing the deity stories and the name of later historical periods were used for the previous historical periods. Camps, villages or hamlets neighbors were all forms of rural organization.

Historians believe that in the process of ruralization from the second half of the tenth century, Co Loa Citadel became Phong Khe Camp, and then changed to Kim Lu; to the period of the Le, it was Co Loa in Dong Ngan District. According to the information, in a period, Co Loa belonged to Yen Phong District, not Dong Ngan District. Thus, from the XI – XV centuries, Co Loa changed its name showing that it was in the process of ruralization with the growing population of the peasantry, leading to the formation of larger scale residential units.