Since the sixteenth century, the history of Co Loa turned to a new page. Nearly a century affected by large fluctuations which had a direct impact on the process of rural development here because Co Loa original residents had been evicted by the Mac, the village formed in the XI – XV centuries within the Citadel would have been seriously disturbed by wars and chaos. These events affected the development of Co Loa village, causing the melting pot in this process seems to return to the starting mark with the migration of groups of residents from other provinces in the country. 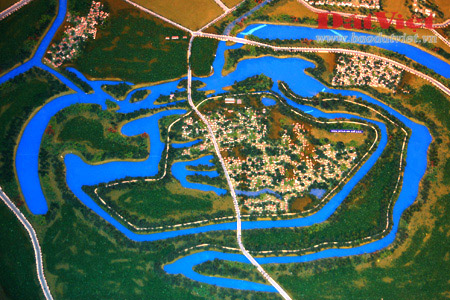 Since the late sixteenth century and early seventeenth century, Co Loa witnessed the migration of many groups of residents from other provinces to settle. The genealogy of oldest families in Co Loa showed that their ancestors migrated here during this time. The stele in house of worship of the Dao family in Cho Hamlet said they settled here about 400 years ago. The earliest families had only about 12 – 15 generations. For example, the Nguyen Dang family in Mit Hamlet has gone through 13 generations; the Nguyen Kim family in Ga Hamlet – considered to be the oldest family in Co Loa has gone through 15 generations; the Lai family in Lan Tri with 14 generations. According to steles, the 4 oldest and largest families in Co Loa were Nguyen, Dao, Hoang and Truong, settled here about 300 – 400 years ago. Other families settled in Co Loa for about 5 – 7 generations. Co Loa now has up to 62 families; the main families are Nguyen, Dao, Hoang, Truong, Lai, Do, Chu, Tai, Pham, Tran, Vu, Chu, Le, Ha, Dang, Cao, Bui, Ngo, Duong, Dong, Vuong, etc. Compared to other villages in the northern midland plains, the number of families in Co Loa is quite a lot, partly because Co Loa Commune is a quite large area, but mainly because Co Loa is a commune of immigrants.

After the Co Loa original population drifted away, this became a deserted place to facilitate the settlement of people from other provinces. They came from lots of places to settle in Co Loa, but the process of occupying this new land was a gradual process. The genealogy of the families in Co Loa also shows that the origins of Co Loa residents are diverse: Ga Hamlet with the Nguyen Kim family from Thuong Tin, Son Nam; the Truong family in Huong Hamlet from Ha Dong, Son Nam Thuong, etc. In particular, Co Loa had a large number of families from Thanh – Nghe areas closely related to Le – Trinh army who defeated the Mac in the sixteenth century. They settled in critical areas or areas around the stations, of which Co Loa was an important position.

According to folk materials, originally, the families only settled in the old citadel and used the land bank as a natural boundary to separate the hamlets. The first nine hamlets established during this period mainly located in the Inner and Middle Citadels. Chua and Cho hamlets were in the Inner Citadel; Nhoi, Vang, Ga, Lan Tri, Dong, Thuong and Huong hamlets were in the Middle Citadel.

On the other hand, the families grew increasingly strongly; the families were split into several parts and moved from one populous hamlet to the more sparse areas. For example, the Truong and Nguyen families in Huong Hamlet were immigrants from the Chua and Vang Hamlets; the Le family in Mit Hamlet was immigrants from Thuong Hamlet; the Nguyen family in Ga Hamlet was from Chua Hamlet, etc. From the initial focus, the housing switch and a number of other causes led to the intermingling among the family residence.

The large families settled in Co Loa soon had the largest and increased membership, so they were present in all the villages in Co Loa. The transition from one populous area to sparse areas – mostly expanding to the outer citadel – was the reason of the formation of new hamlets next to the first nine hamlets: Bai, Mit, Trai Xom Vang and Tu Xom Vang hamlets. Some of the families went beyond the Outer Citadel and established a new small village named Trai Xom Vang. The first residents of the Bai Hamlet included a person from Chua Hamlet, two people from Vang Hamlet; Mit Hamlet had some people from Thanh Hoa province and the main families of this hamlet were Nguyen Dang, Le and Tran. But the neighborhood was originally just a small area of ​​residence; it was not regarded as an independent hamlet. Along with the development of the families here, the area became an independent hamlet, and merged with the hamlets in Co Loa. The merger of these hamlets was in 1704.

Thus, in the early eighteenth century, Co Loa had 11 hamlets, including nine old hamlets plus Bai and Mit Hamlets; Trai Xom Vang was incorporated into Vang Hamlet and was not regarded as an independent hamlet.

The gathering and development of families in Co Loa from the end of the sixteenth century formed the basis of the residence units – hamlets, and larger units – giáp. Folk documents in Co Loa show that giáp in this area was often the gathering of a number of nearby hamlets. The specific development of hamlet structure in Co Loa in this period still needs further study, but it can be claimed that Co Loa was composed of many parts, including different hamlets and the main factors to connect these parts into a common village were the intermix of residence areas and the effect of mental factors.

The majority of Co Loa residents during this period were immigrants. To live in a foreign land which had a long and majestic history, they made the brightest history of Co Loa, the period under King An Duong Vuong’s reign, their spiritual fulcrum. They resided into hamlets in the old citadel, worshipped King An Duong Vuong and bound together in the affection of villages and hamlets. So, the event the residents built Thuong Temple for worshipping An Duong Vuong can be seen as the time the residents of the hamlets in Co Loa consolidated into a large village. The time of construction of Thuong Temple can not be determined. However, according to the most ancient stone steles, i.e. Tạo lập thạch bi, Cung phụng sắc lệnh tôn phong chuẩn cấp and Nhiêu miễn tô dịch khắc chí, ký phụng sự established in 1654, 1683 and 1711 respectively, etc., we can guess that the temple was built in the seventeenth century. Therefore, Co Loa Village was probably formed as a large unified village consisting of many hamlets during this time. Thuong Temple stele says that there was a land dispute between Co Loa and Duc Tu; however, the disputed land was part of the Co Loa village. This proves that in the XVIII century, Co Loa was a separate village, independent of the other villages in the region. 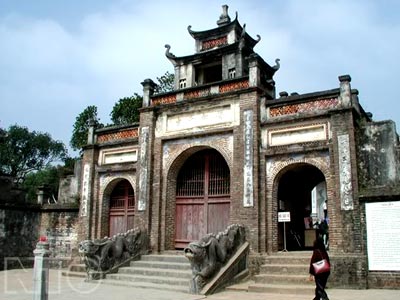 Therefore, the end of the seventeenth century was probably the time marking the merger of hamlets in Co Loa into a large village and also marking the formation of the villages here. The command of King Le – Lord Trinh at the second half of XVII such as the command in 1671 and 1864, etc. specified as Co Loa commune, Dong Ngan District.

Thus, at the end of the XVII century, Co Loa became an incorporated village from many hamlets and was also a commune – a base-level administrative unit in the feudal system. From the second half of XVI century to the second half of XVII, after living for nearly a century, the residents from many places to Co Loa turned this area into a developed rural area.

In the seventeenth century, the most prominent event was the land dispute between Co Loa and Duc Tu villages. This event was recorded quite specifically on the steles of Pháp điện sắc lệnh carved in 1708, Xã hội bằng tích in 1717, Đông thành bi kỷ in 1919. The disputed land was in the east of Co Loa – Sa market. Co Loa and Duc Tu Communes traded together in Sa market, but according to the Official Land Register, this market belonged to Co Loa Commune. To keep the concord, Co Loa commune did not charge market-fees to Duc Tu villagers; so the boundary between the two villages blurred. However, Duc Tu Commune claimed more space for the market and field, making Co Loa Village to sue to regain the land of the village. The proceedings extended to the 1708 and this land was claimed to belong to Co Loa. To confirm the ownership of the land and to avoid disputes later, Co Loa Village established the stone stele Pháp điện sắc lệnh in 1708.

In addition, there was a land dispute over the 50-hectare field of Luong Quan and Duc Tu Communes adjacent to the land citadel of Co Loa Commune. Because the villagers of the Luong Quan and Duc Tu Communes resided far away so they often sold the land to Co Loa people to grow agricultural products; while the Royal Annals Eunuch Hoang Nhu Long occupied the worship field of Co Loa villagers for cultivation. The high-raking mandarin gave a verdict that he had to return the fields to Co Loa village for worshipping King An Duong Vuong and allowed him to use the 6 hectares of land of Luong Quan and Duc Tu villages contiguous to Co Loa Commune on condition of paying annual  tax.

According to folk memories of An Duong Vuong, Au Lac State was a factor linking small hamlets in the village into a large melting pot – Co Loa Village and also the factor linking Co Loa village to nearby villages. Co Loa was twinned with seven other villages who worshipped An Duong Vuong, including Co Loa, Cau Ca, San Gia, Dia Bi, Van Thuong, Mach Trang, Thu Cuu and Ngoai Sao which had close relations to one another. On the Thuong Temple Festival, the eight villages together donated money for organizing the festival. In the procession celebration of An Duong Vuong’s palanquin, the villages were clarified.

Besides Thuong Temple, for convenience and also to be the worship place for the whole village to gather in the festival and discuss general affairs, at the end of the seventeenth century, a common house of the village was built on the land which was considered the old court of King An Duong Vuong – Ngự triều di quy Communal House. Legend had it that the communal house had been moved from Manh Tam Tao Forest, so Co Loa later was twinned with both villages. Ngự triều di quy Communal House was situated in the cluster of communal house, Bao Son Temple and small temples for worshipping My Chau. At the end of the seventeenth century, Co Loa village had communal houses, temples, pagodas and small temples as the place of worshipping like other villages in the North.

In addition to agricultural production, the village developed a number of handicraft villages tied to ceremonial occasions of worshipping An Duong Vuong such as popcorn and rice-cake which were indispensable in the festival at the shrine. Co Loa people also traded in Sa market with the nearby villages. And Sa market brought an important source of income for Co Loa village.