Hanoi Flag Tower is situated in Dien Bien Phu Street, Ba Dinh District, Hanoi which was built in 1812 under King Gia Long’s reign, Nguyen Dynasty in the sounthern part of Thang Long Imperial Citadel where Tam Mon Palace under Le Dynasty had been built. This tower marked the beginning point of the southerly central axis, followed by Doan Mon Gate and Kinh Thien Palace – the central and most important point. Hanoi Flag Tower remains an undamaged and the most imposing structure in the entire Thang Long Imperial Vestige. 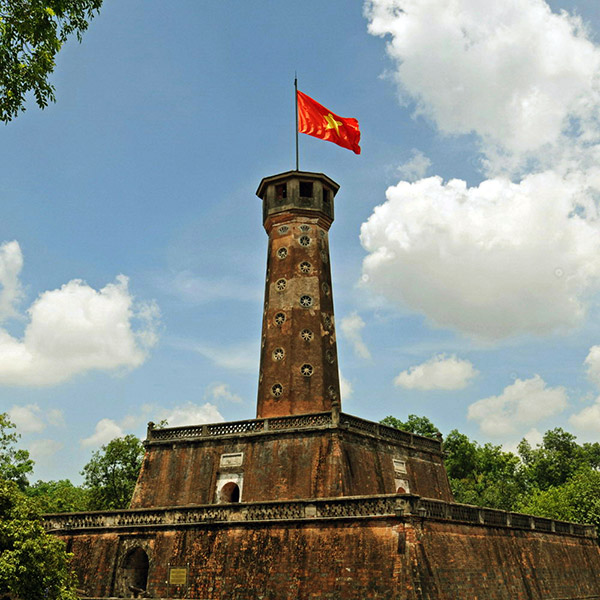 The part above the third tier is a column with 8 fringes narrower to the top. Each fringe is 2.13m wide and 18.2m high. The spiral staircase consists of 54 steps. It is lightened and ventilated by 39 flower-shaped and 6 fan-shaped windows which scatter along the fringes with 5 or 6 on each.

On top of the tower is an octagonal observatory of 3.3m high with 8 doors in 8 sides. In the middle of it, there is a round base of 0.4 meter in diameter and 8m high up to the top where the national flag is fixed. The whole architecture is 33.4m high from its basement up to the top including three tiers of 12m, column of 18.2m and observatory of 3.3m. If including the round base for flagging on top, the structure is 41.4m high. 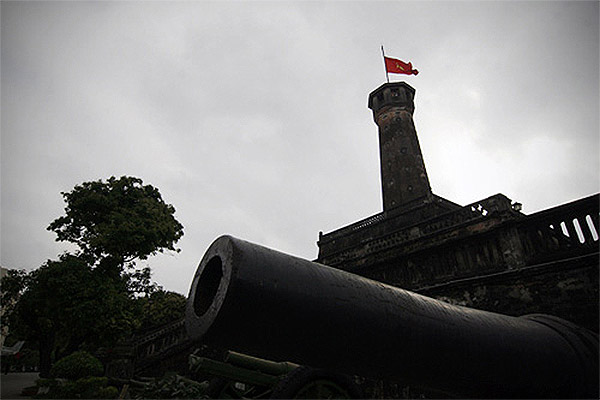 Hanoi Flag Tower is one of the rare architectural works in Hanoi Citadel that was fortunate enough to not be destroyed by the French domination administration between 1894 and 1897. 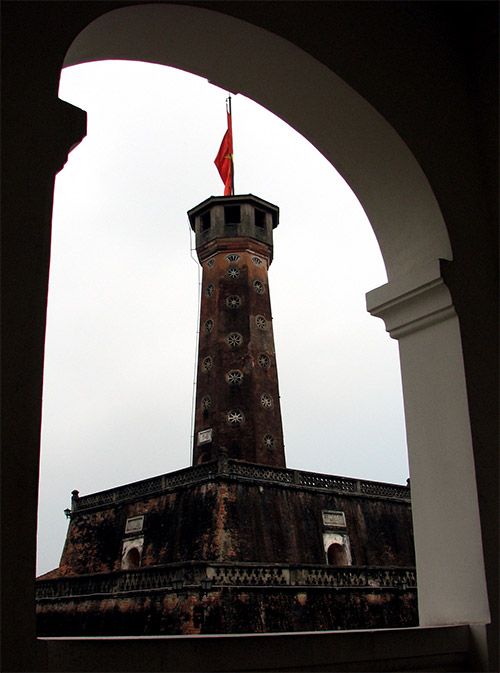 For more than half of a century, plugged on the top of Hanoi Flag Tower, the red flag with yellow star has flied in the sky of Thang Long – Hanoi Capital of thousand years tradition as a symbol of glory and pride of an independence and freedom Vietnam. According to study documents, since 1986, a 24m2 red flag with yellow star has always streamed over Hanoi Flag Tower.

According to some researches, in a photo taken in 1890 by Louis Sadoul, a French army medical officer, the current Lenin Park near to Hanoi Flag Tower had the name of Elephant Lake because this was the place for bathing elephants under Nguyen Dynastry. The current ancient trees still had not been grown. We can also see in the photo that French army set up relatively firm camps on the storeys of the Tower.

A special thing is that during the hottest days in Hanoi, the atmosphere inside the Tower is always cool. The structure of doors is so scientific that the rainwater can not flow into the Tower however heavy the rain is.