Chinh Bac Mon (Main Northern Gate ) or Cua Bac (Northern Gate of Thang Long Imperial Citadel) is situated in Phan Dinh Phung Street which was built in 1805 and is the only remaining gate to Hanoi Citadel under Nguyen Dynasty. 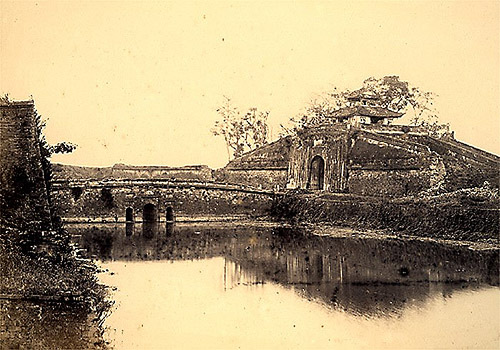 Documentary photo of Northern Gate taken by Doctor Hocquard during 1884 – 1885. The citadel was surrounded with a wide moat and a bridge leading to the gate. At that time, traces of cannons fired from French battleships in 1882 could be seen.

The watch tower was built with wooden frames of eight roof style and four doors into four directions. Rain-water on the watch tower gazebo was drained with two stone gutters.

Standing on the gate, imperial troops could observe the outside and inside of the citadel as well as movement of the enemy. Therefore, after ocuppying Hanoi Citadel, French army still had to use the watch tower gazebo as the sentry box.

Currently, the watch tower gazebo is being restored partly for worshiping two province chiefs of Hanoi Citadel i.e. Nguyen Tri Phuong and Hoang Dieu who sacrified for not being able to defend the citadel under the assault of French army. Many residents often visit the watch tower gazebo of North Gate and burn incense in commemoration of the two national heros – whose names are given for the two modern streets beside the ancient citadel.

The rampart was solidly built with stone and bricks; the rampart footing was fortified with stone. The gate was erected with a brick arch in which a horizontal bricks was interposed with a vertical brick.  The size of bricks was 35.5 cm x 10 cm x 12 cm. The size of stone pedestal was from 38 to 86 cm. 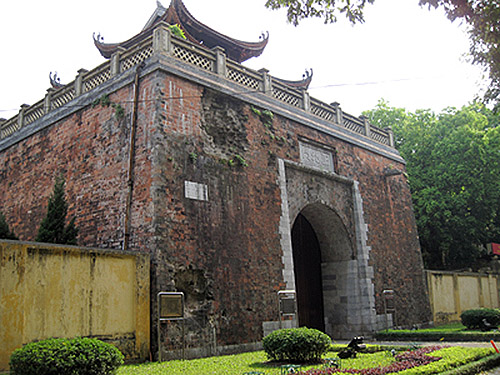 North Gate at the present

According to historical data and documentary photos taken during the time of Hanoi Citadelwas not undamaged, there were two triangle wings leading to the gazebo.

In front of North Gate, a brick bridge crossed a 20m moat which surrounded the citadel. By observation, we can see that the the moat was located at the lawn, sidewalks and a part of Phan Dinh Phung Street.

Some say that the bridge over the moat to North Gate was a solid brick bridge, not a suspension bridge; the moat was not dug for defensive purpose. However, many other think that, though it was not a suspension bridge, but the target’s defensive moat encircling the ancient citadel was essential – it helped to limit the enemy to approach the rampart.

Although North Gate was built by the Nguyen Dynasty, but below the imposing gate, there were many layers of relics of citadels from the previous dynasties, confirming the continuity of the thousand-year history of the Imperial Citadel.

In 1998, at North Gate, archaeologists found many architectural traces at the depth of 1.66 m and 2.2 m, including traces of rampart walls built of stone and wooden-hammer brick under the Le Dynasty.

Today, North Gate becomes an interesting attraction for domestic and foreign tourists. Visitors can easily see at the outside of North Gate, there are still two bullet holes caused by the France cannon when they used gunboats to attack Hanoi from Red River in 1882.

North Gate is not only a leftover of Hanoi Ancient Citadel, but also a testament to the heroic struggle of Hanoi People and Army in the early days against the occupation of the French to Hanoi.