Legend has it that after defeating foreign invaders to the foot of Ve Linh mountain, expelling the last enemy out of the country, Saint Giong left his iron armor and rode his iron horse up to the sky. Originated from a small temple named Dong Thien Vuong that one day the King Le Hoan (Le Đai Hanh) with his soldiers were on their operation to fight Tong invaders, the King and soldiers came in and prayed for good luck. In that battle the invaders were soon driven out of  the country. On the way home, the King came in to give thanks and ordered to find a root of aloe wood to make a statue and construct a majestic temple and conferred the titles “Phù” and “Thiên”, his name is worshiped at SocTemple as “Phù Đổng ThiênVương”.

Soc temple complex located in a  vast area of mountains, trees and plants are verdant and thorny bamboos are golden all year round. Ancient and sanctuary temple roof was shrouded by the canopy of ancient trees hundreds of years old. 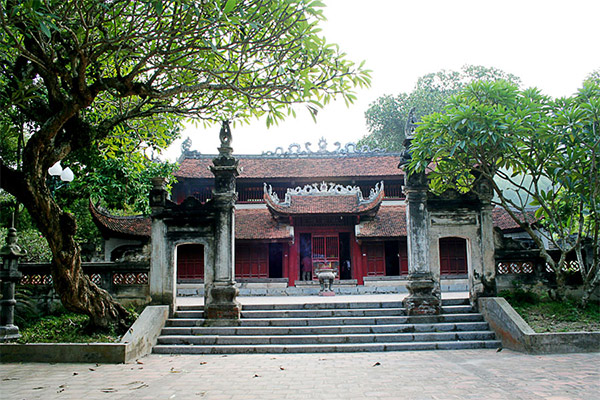 SocTemple relic complex consists of Trinh temple, Mothertemple (for worshiping Saint. Giong’s Mother), Dai Bi pagoda, Upper temple, Da Chong which is believed to be the iron amour of Saint. Giong left before flying to the heaven and the stone tomb recording the history of Soc temple festival, forming a complex harmonious and lively. All these works have been built and restored since pre-Le dynasty and upgraded many times by the feudal dynasties and it is bigger and more beautiful today. Located in this relic complex are also Non Nuoc pagoda (Soc Thien Vuong Thien Tu), the place for worshiping the Great Buddha, its first master is Ngo Chan Luu who was conferred the title “Khuong Viet Quoc Su” in 971 by the King Dinh Tien Hoang. Non Nuoc pagoda which has been destroyed by the war has just been rebuilt after the war. In the pagoda, there is a masterpiece, a  statue of Great Buddha made of 30 tons of copper.

Soc temple historical relic complex remains many valuable historical and cultural value, contributing to the cause of Vietnam cultural preservation and promotion, recognized by the State as cultural heritage of national level. 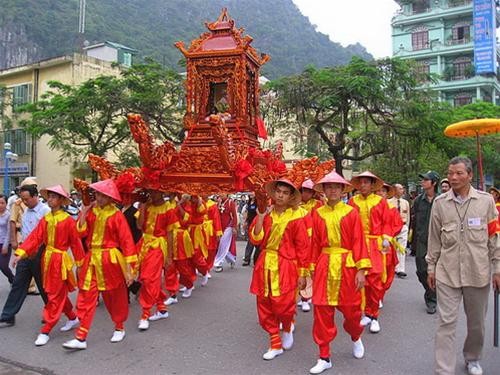 Giong festival is a traditional festival annually celebrated  in many localities within Hanoi to commemorate and honor the scared feat of the legendary hero Saint Giong, one of four immortals in Vietnam’s religious beliefs.

After being recognized by UNESCO as the world’s cultural immaterial heritage, Giong festival in Soc temple has attracted more attention of people, visitors at home and abroad. Traditionally, the people of 8 villages belonging to 6 communes around Soc temple (Tan Minh, Tien Duoc, Phu Linh, Duc Hoa, Xuan Giang, Bac Phu) take part in procession including incenses, flowers, betels and arecas, fighting elephants,  bamboo flowers, king grass, decorated palankeen…which all demonstrate the gratitude to Saint. Giong and the pride of the national tradition to fight the foreign invaders and sporting spirit.

The most special thing in Giong festival is offering of bamboo flowers. They are artificial flowers woven with bamboo laths with cotton dye in artificial colouring in one end which  symbolize Saint. Giong’s horse riding-whip. Bamboo flowers are offered in the procession in Thuong temple and then down to Ha temple. After procession, these bamboo flowers are distributed to the villagers and visitors as a lucky gift in the new year. In addition to the procession of offering and presents, there are various cultural and sports activities serving the local people, pilgrims and visitors including traditional games such as flying trapeze, clay pot – beating, duck-catching, Chinese chess; Quan Ho singing, singing and dance performance; soft volleyball, traditional martial arts…

Soc temple – Co Loa citadel tour takes place in one day, starting from Soc temple and then the tourists visit and celebrate in Non Nuoc pagoda – one of the most ancient pagoda in Vietnam. This pagoda, located in the Soc temple historical relics complex, is at the elevation of over 110m above the foot of the mountain where placed the statue of Great Buddha, the largest monolithic copper statue in Vietnam, weighing 30 tons, 6.50m high. The pagoda was built on the ground of the old one built in pre-Le dynasty basing on the ancient pagoda architecture, decorated with designs and patterns popular in the pre – Le dynasty.

At noon, tourists and visitors depart to Co Loa citadel by car, have lunch and rest in Dong Anh town and then to Co Loa. Here, tourists will carry thurible in temple of An Duong Vuong, Pearl well, Ba Chua temple…In the afternoon, tourists may visit vestiges and landscape in  Co Loa

According to legend, Phu Linh commune, Soc Son district, Hanoi is the last stop of Saint Giong before his flying to the heaven, therefore, every year on the 6th of first lunar month, local villagers solemnly celebrate festival in the Soc temple historical relics complex where Saint Giong – Phu Dong Thien Vuong is worshiped.

Co Loa Festival is also annually celebrated, beginning on the 6th of January, which is the date when King An Duong Vuong came to the throne as a King, in order to memorize his service to merge Au Viet – Lac Viet to become Au Lac country, expanded the territory to the plains, coastal area and established Co Loa capital.