Dinh Trang archaeological site lie snugly in highland area, near to old Hoang Giang river, section from Nhan Ly hamlet, through Dinh Trang hamlet to Thac Qua hamlet, with area about 15.000m2. Dinh Trang is far from Duong May about 1,5km2, far from Đong Vong, Bai Men and Cau Vuc about 2km; far from Tien Hoi archaeological site about 4km in the direction of the Northeast. 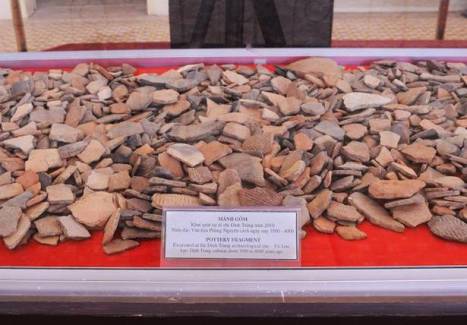 Particularly, it is found many Dong Son resident graves at Dinh Bang area. Until now, 17 graves were discovered, in the first investigation (year 1969): 1 grave, first excavation: 1 grave, the second: 2 graves, the third: 2 graves and the fourth: 10 graves. All is land grave. The graves have stable direction to northwest – southeast or vice versa. As for grave M8, the dead person’s limb was curled up. The remaining dead person was lied supine and limbs stretch. Crushed and decayed condition of the bones and some skull were still remained. Almost graves have funeral objects which are Dong Son objects such as: pottery, lance, copper axe.

– Copper objects: 254 items, making up 15.89%, including iron objects: 2 items, making up 0.12%, bone objects: 4 items, making up 0.25%. Particularly, objects marked with 71ĐT: 123 items were made from a 3,8cm section of stag horn, having borehole ream out 2 ends, round and flat cross section, rectangle hole pierced in the centre of body, round and small 2 holes on the top, opposite each other through slit along the body. This is human or animal face jewelry.