Dong Vong archaeological site is located to the South East of Co Loa citadel, on a high strip along Hoang Giang River. It has an estimated area of ​10,000m2.

Dong Vong archaeological site, explored in 1965 by Faculty of History, Hanoi General University, has been under many excavations and appears to be rather consistent in the stratigraphy.

Stone items: 1070 objects, of which there are 845 specimen such as axes, chisels, net lead, plumb-line, planer blades, scrapers, jewelries such as bracelets, earrings, rings, cores, hoops with sections of rectangular shape, triangle shape, shape of D, L letters, 2 stone arrows, and 143 other stone objects such as mounts, jaw stone piece, chocking piece, axe in the rectangular shape which have been in the process of manipulation, grater). 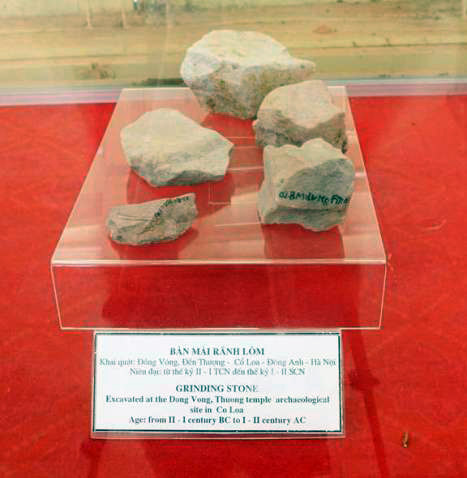 In the place, it has been found many copper slag pieces, but not copper objects. Based on the characteristics of culture layer and relic development, it is possible to determine that Dong Vong is the archaeological site of Phung Nguyen culture, date back to 3700 – 4000 years ago. This site shares many similar features to Go Bong site, Ren commune (Phu Tho).