Thang Long – the capital of Đại Việt (Great Viet) was very prosperous from the 11th – 15th centuries, under the reign of Ly – Tran – Early Le. But due to many causes and historical events, ancient Thang Long has only remained with memories of a magnificent and elegant capital city that make us irresistible to track and restore.

The whole impression of the appearance of Thang Long seems to remain only on the ground at some segments of the outer bulwark. In 2002 and 2003, a large-scale archaeological excavations in the centre of Thang Long Royal Citadel revealed a wealth of monuments and relics which showed us the uninterupted development of the history under dynasties in Thang Long – Hanoi. 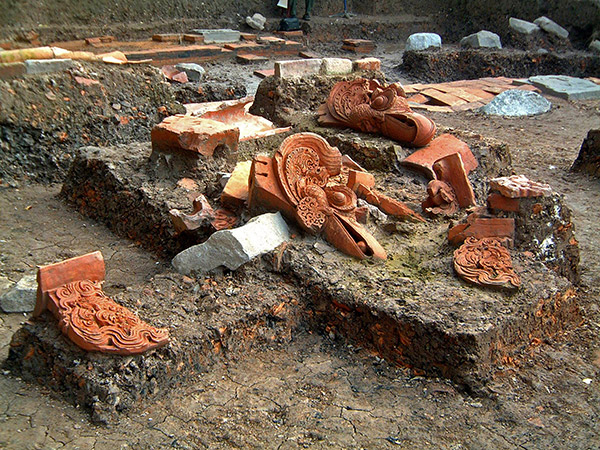 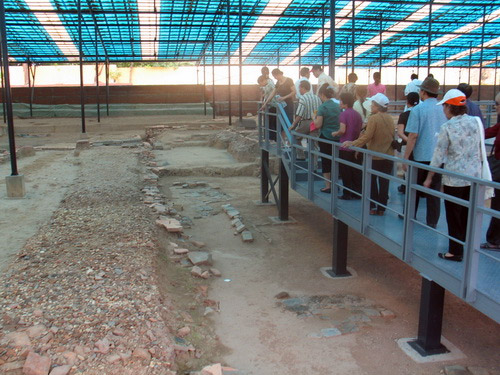 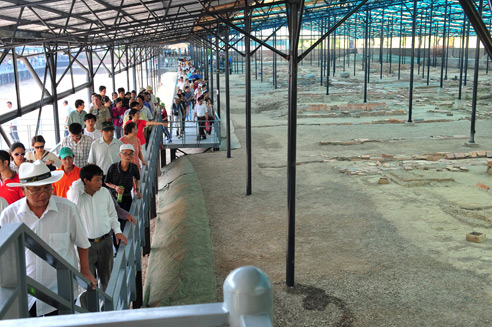 The top layer is the architectural layer under Le Dynasty (15th – 18th centuries) with the remnants of the architecture of wooden-hammer bricks, well system, especially types of blue and yellow traditional tiles decorated with image of 5 claw dragons, used for the roof of the kings’ palaces and the royal porcelain dedicated to the kings. Some positions have traces of Nguyen Dynasty (19th – 20th centuries) the traces are unclear.

How are the vestiges of the architectural structures found in the archaeological zone?

Zone A is located adjacent to Hoang Dieu Street. This area has been discovered with many important architectural traces, typically the trace “multi-room architecture” dating from Ly – Tran Dynasties, in an area of over 70m long and 18m wide which are evidently reflected through 40 column base stone pedestals, distributed in 10 rows, each row of 4 cylinders with 9 rooms. These remnants are located in the north of the archaeological area. 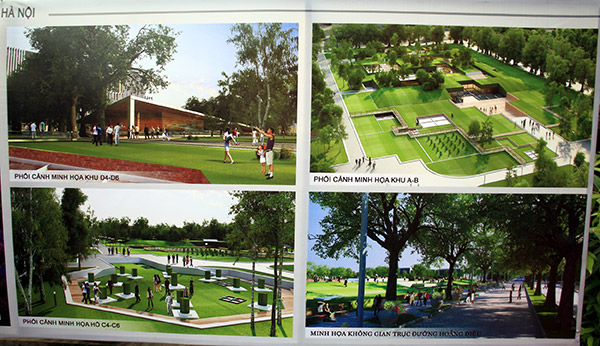 In the west of this architecture, there were 11 clusters of foundations of small architectural form, to be presumed as parts of eleven hexagonal floor buildings, which run north-south with the length of 82m. The small building could be for excursion; this was very unique type of architecture in Asian ancient imperial cities, forming the beautiful campus of architectural composition of great palaces in the region.

The southern end of the A has traces of the foundation of two large-scale architectural monads, intact with lotus stone feet system of the same yard (front yard, back yard) and the brick floor dating back to the time of Ly – Tran Dynasties.

Zone B is located adjacent and parallel to Zone A. This area has been discovered with many large architectural foundation traces of Ly – Tran Dynasties with multi-space  structure, construction techniques and reinforcement similar to Zone A. In the north of this area, at hole B16, archeologist have found a ground of an architectural monad under Tran Dynasty with large column base lotus-shaped stone pedestal (column diameter of about 52 cm) are still in original positions.

Zone C is next to Zone B, adjacent to the campus of Ba Dinh Hall. This area has five new excavation pits. Although the excavation has been limited within a small area, in reconnaissance hole C3, archeologists have found architectural traces of Ly Dynasty with systems of large square column footing reinforced with gravels, bricks and pile systems and wooden pillars.

Zone D is located in the position of current Ba Dinh Sports Centre, next to the Doc Lap Street and next to the Ba Dinh Hall campus. This area has been excavated with 7 pits (D1 – D7). In pits D4 – D6, there are architectural foundations of many periods overlaying on each other similar to Zone B. In which, there is an architectural ground of Ly – Tran Dynasties, clearly identified through the gravel footing under stone columns which reveals in an area of about 450m2 with 7 compartments (5 compartments and 2 wings). In this architecture, archeologists have found out some relics like pieces of Ly’s dragon-decorated golden leaves and pieces of tiles with words “Hoàng Môn thự dận giám tạo” (Tran Dynasty) and “Kim Quang Palace” (Le Dynasty), showing that Kim Quang Palace and Hoang Mon Building were built here in the past. 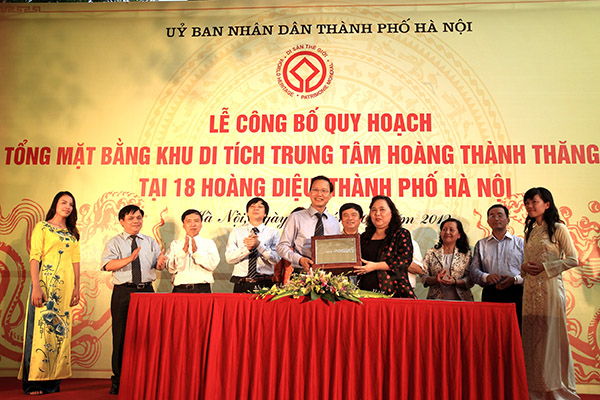 Archaeological findings about Thang Long Imperial Citadel vestige at 18 Hoang Dieu have been highly appreciated by national and international scientists, as these are important findings with leading historical and cultural values of the nation, contributing to enhancing the position of Thang Long – Hanoi and pride of the history of Vietnam.

In the afternoon of December 28th, the Vietnam Academy of Social Sciences handed over Zones A and B within Archaeological Monuments Zone 18 Hoang Dieu to Hanoi City People’s Committee.

The handover of Zones A and B within Archaeological Monuments Zone 18 Hoang Dieu is one of the contents of the Law on Cultural Heritage and the Government’s commitment to the recommendations of the International Council of Monuments and Sites (ICOMOS), the implementation of guidance of the Prime Minister and commitments of the Hanoi People’s Committee and the Vietnamese Academy of Social Sciences.

Conservation center of Thang Long – Hanoi vestige is empowered by Hanoi City People’s Committee to be responsible for the management, conservation and promotion of values of relics Zone A – B in accordance with the provisions of the State, Law on Cultural Heritage as well as international conventions and charters on heritage after receiving the Zone A-B of the archaeological ruins of Thang Long Imperial Citadel at 18 Hoang Dieu. 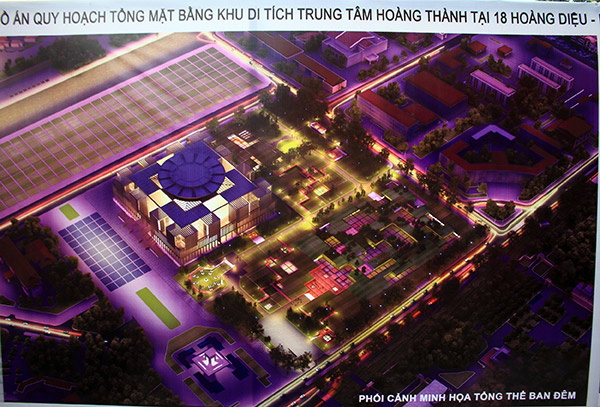 Surface general planning of 18 Hoang Dieu zone is specific; in the planning area, there are House of Parliament – a modern building and cultural historic works and relics that need to be preserved. Therefore, the Government has requested that the planning must meet the requirement of harmonious combination between House of Parliament and the Culture and History Park. The conservation works should have an appropriate rate, harmonious architectural language with space and landscape architecture in the region.

Prime Minister assigned the Ministry of Culture, Sports and Tourism to preside and coordinate with the Vietnam Academy of Social Science in researching and acquiring more ideas to determine the function of 18 Hoang Dieu Zone in the overall area of  Thang Long Imperial Citadel before; suggest and propose the entire or partly preservation of historic relics in the region. At the same time, to research a reasonable model of airy museum with spaces opening to Hoang Dieu and Hoang Van Thu Streets; limit the building constructions on the whole region.

The Prime Minister has asked the Ministry of Construction to assume the prime responsibility and coordinate with the Ministry of Culture, Sports and Tourism to research and calculate the building of tunnels across Hoang Dieu Street, which connects 18 Hoang Dieu Zone with the Imperial Citadel of Thang Long, meeting coherence and consistency requirements of a whole Culture and History Park within Thang Long Imperial Citadel Centre.