Ma Tre used to be a cemetery, located to the South West of South gate of Co Loa citadel, to the left of its was a road opened from Sa market to An Duong Vuong temple, between the Middle and Internal Rampart.

On June 21, 1982, while lowering paddy plots in Ma Tre area, the teenagers who contributed to that of household Tai Kim Quang explored a bronze drum containing more than 200 brass objects of various kinds.

Upon being aware of the information, Co Loa commune People’s Committee in combination with Hanoi Department of Culture and Information and other competent authorities conducted another investigation on the said place and organized sessions for items revoke. 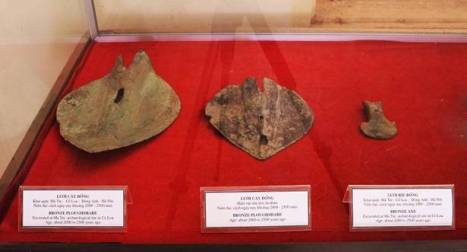 The researches on the collection of Ma Tre copper objects reveal that the place contains typical objects of Dong Son culture such as drums, containers, jars, axes, daggers, spears, and specific objects of locality similar to the form of Dong Son in Ma river. Square-heel axe (boot-shaped axe), heart-shape axe head are typical for Dong Son culture and some objects gained by exchange such as  shovel, fish-tail spear.

Findings in Ma Tre as well as copper arrows in Cau Vuc and objects in Nhoi commune may prove that those places are property storages in the context of big social changes.

The drum at the explored time was lying in 30 cm deep under the field surface, on back, covered by yellow clay. The upmost cultivating layer in black grey colour contained some broken pieces of Co Loa pottery.

A storage of objects is included in a copper drum and the drum itself is a storage of rich historical materials for the investigation on the water rice agriculture using copper ploughshares and development of metal metallurgy.