La Thanh or Dai La Citadel was a part of the ancient architectural complex of Thang Long. It was the outermost ring protecting the Imperial Citadel of Thang Long through many Vietnamese feudal dynasties. Although King Ly Thai To firstly considered Thang Long as “a capital city forever”, the name La Thanh appeared before Ly Dynasty. La Thanh or Dai La Citadel originated from the time our country was invaded by Tang Dynasty. Then, Tang built Dai La Citadel to garisson troops. However, the remaining vestiges of La Thanh now was not the citadel built by Cao Bien; but largely built by Ly dynasty. 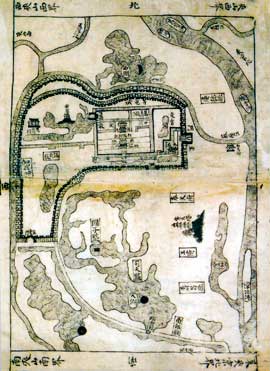 According to historical documents, when King Ly Thai To moved the capital to Thang Long, an incident happened. Right after the King’s boat just landed at Nhi Ha next to Dai La Citadel, there was a yellow dragon flying up. Therefore, the King named the capital Thang Long meaning that this was the land of a dragon flying up. From this base, it can be confirmed that the east of the river was contiguous to Nhi River. Based on old documents, many scientists believe that, under Ly’s Dynasty, Nhi River was near to Hang Than steep (Hang Ma Ward, Hoan Kiem District), down to the Bach Ma Temple (Hang Buom Ward, Hoan Kiem District) and Hai Ba Trung Temple (Dong Nhan Ward, Hai Ba Trung District). Thus, the eastern wall of Dai La Citadel stretched from Hang Than steep to Bach Ma and Hai Ba Trung Temples.

As named by country folks in Buoi and Quan Ngua areas, Hoang Hoa Tham street was Ly Citadel, i.e. the citadel of Ly Dynasty; scientists made the comment: the part of the northern wall of Dai La Citadel was Hoang Hoa Tham street, directly to Phan Dinh Phung Street (where the North Gate still remains). This was also consistent with the record in the Complete History of Dai Viet that Dong Co temple was built by King Ly Thai Tong according to the dream of the god; the location was “on the right hand in Dai La Citadel”. Dong Co temple is currently situated to the right of Hoang Hoa Tham Street. Therefore, many scientists have guessed that the moat protecting the north wall of ancient Dai La Citadel is under Phan Dinh Phung Street.

Historical documents say that the martial art training area under Ly Dynasty was Xa Dinh, changed to Giang Vo School, located in the south of Dai La Citadel. The ancient Xa Dinh or or Giang Vo School were Giang Vo area at the present.

Thus, Dai La Citadel under Ly Dynasty stretched from Hang Than steep, along Nhi River, down to Bach Ma and Hai Ba Trung Temples, O Dong Mac, running through O Cau Den, O Cau Dua, cutting through Giang Vo, to Cau Giay, running along Buoi street to Yen Thai street and then back to Hoang Hoa Tham street. The four walls of La Thanh were surrounded by a natural moat system, i.e. Nhi River in the east (now Red River), Kim Nguu river in the south, To Lich River in the southwest, west and north.