In 2019, the Thăng Long – Hà Nội Heritage Conservation Centre worked with the Institute of Archaeology of Vietnam to carry out excavation on area of nearly 1000m2 to the northeast of Kính Thiên Palace. After almost one year of excavation, the Centre completed a Preliminary Report on the results of exploratory excavation of the Kính Thiên Palace area in 2019. The report shows that enquiries into the underground of the world heritage site of Thăng Long Imperial Citadel have given researchers one surprise after another, demystifying gradually the myths relating to the Thăng Long Forbidden Citadel which is home to the oldest vestiges of the dynasties of feudalist Vietnam. 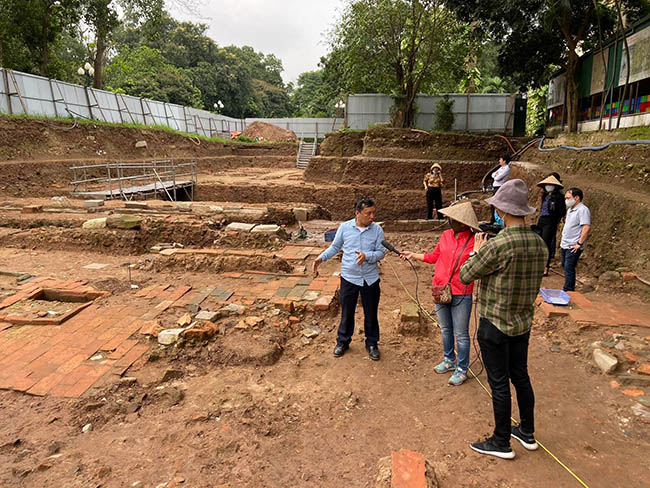 Excavation pit to the northeast of the Kính Thiên Palace.

According to Assoc.Prof.Dr. Tống Trung Tín, who headed the excavation team, the geo-strata this time is relatively tight with the northern, southern, eastern and western walls measuring 5.05m, 5.15m-5.85m, 5.80m, and 4.25m-6.10m respectively and bearing remarkable resemblance to the previously excavated pits in the area of the Kính Thiên central axis. In places that remain fairly intact, the traits of cultural layers with 1,300 years of history can be seen relatively clearly, ranging from the Nguyễn, the Restored Lê, the Early Lê, the Trần, the Lý all the way down to the pre-Thăng Long Period. In other places, the artefacts and relics have been significantly displaced, partly because digging could not reach the end of the soil, partly because of the destruction from later, subsequent relics which means the cultural layer was seriously destroyed. Therefore, the evolution and dynamics of the cultural layers varies across periods and places. 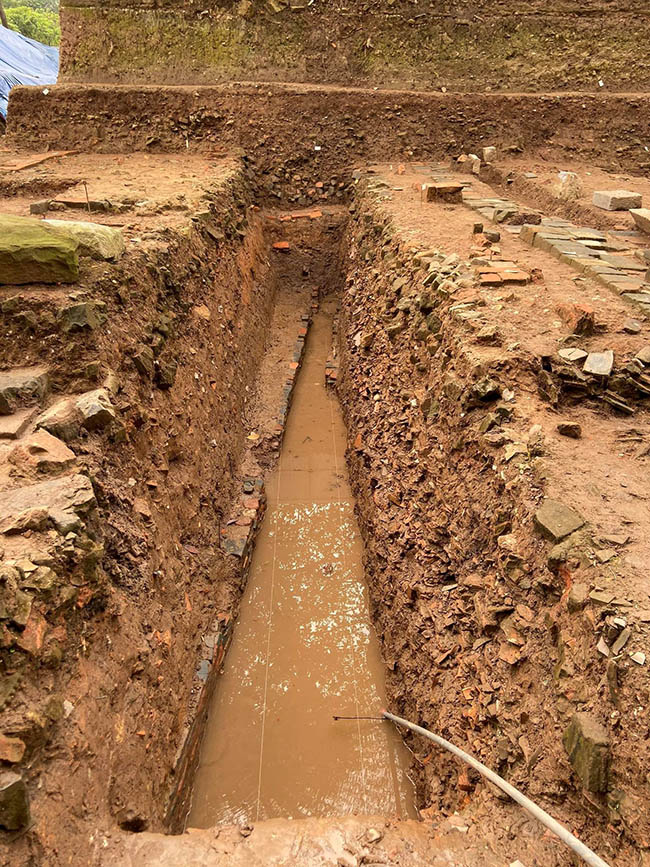 For the first time, a drainage tunnel of the Đại La period was discovered at a depth of five meters from the ground.

Relicwise, for the first time archaeologists have found in this area a steady water channel built of bricks under the Đại La Period (VII-IX centuries). The discovery supports the theory that the central sector of the Đại La Citadel coincided with the central sector of the Imperial Citadel of Thăng Long, with the latter being built on the basis of the former as described in the “Imperial Edict of Capital Transfer”.

Structures of the Đinh – Tiền Lê, Lý, and Trần periods continue to be found at the rear of the Kính Thiên Palace Foundation, testifying to the relatively even centrality of the spots that have been excavated in this area, at a similar level with the whole area of 18 Hoàng Diệu and Vườn Hồng that were excavated previously.

Although the architectural vestiges of the Lý Dynasty are small in number, the discovery of a large-sized terracotta dragon shows that there could have been an important and massive structure in this area. Architectural vestiges of the Trần Dynasty are of smaller scale. The large amount of cinders and ashes  remind of historical account of the wars towards the end of the 14th Trần Dynasty which destroyed the capital city on multiple occasions.

Most noteworthy is the discovery of the massive architectural vestiges of the Early Lê and Restored Lê periods which opens for archaeologists new directions of research. The Lê ruling house may have built in this place many important structures evident in the discovery of floor consolidation decorated with lime flowers and thoroughly enforced foundations. Under the Restored Lê Period, there was a substantial colonnaded architectural complex to the West and orchard yard to the East.

According to Assoc.Prof. Dr. Tống Trung Tín, from this column foundation, it can be inferred that this could have been a structure with five compartments and 2 bays situated on the royal axis of Đoan Môn- Kính Thiên. It could have been one of the gates of another important palace in the central sector of the Forbidden Citadel of Thăng Long. 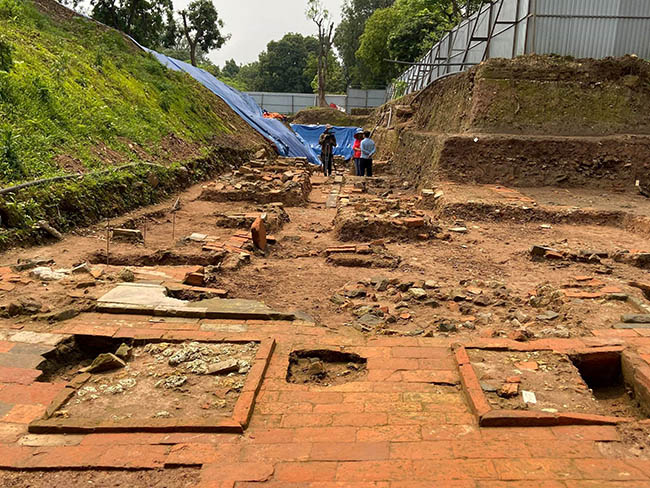 A complex of architectural vestiges made up from paths, tiled yards and flower basins of the Restored Lê period.

Meanwhile, according Assoc. Prof. Dr. Bùi Minh Trí, Institute of Imperial Citadel Studies, the discovery of the orchard yard of the Restored Lê period consisting of the path and the flower basins lining along the path was very important, in the sense that it sheds more light on the level of spatial planning and landscaping of the structures in the palaces of Thăng Long at that time. Historical documents mention the presence of Royal Garden in the palaces of the Imperial Citadel for the kings and royalty to stroll, but provide no specific descriptions. This discovery, therefore, is thought-provoking and raises many interesting points for discussion about the architecture and landscape of Thăng Long imperial palaces of yore. 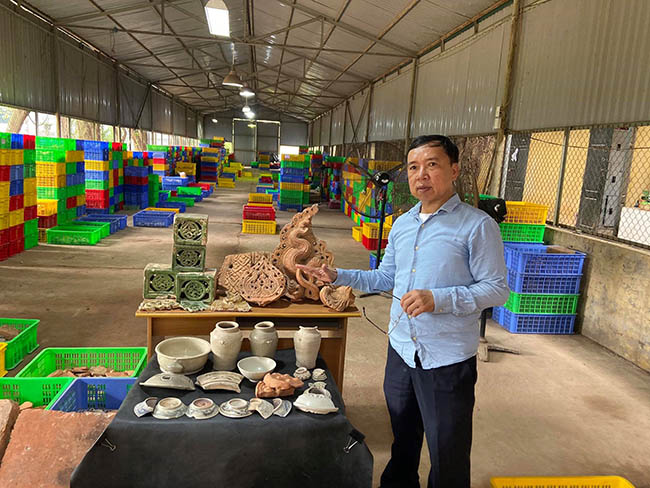 Original and unique artefacts, including huge terracotta dragon mane of the Lý period.

The excavation revealed a number of impressive artefacts, such as tubular tile tips decorated with lotus flower of the Đinh-Anterior Lê period, high-end ceramic fragments of the Lý Dynasty; large-sized terracotta dragon mane of the Lý Dynasty; bodhi leaf decorated with phoenix of the Trần Dynasty, bricks engraved with the three characters Vĩnh Ninh Trường of the Trần Dynasty; ceraldon-glazed cuboid bricks, ceramicware adorned with pictures of five-clawed dragons of the Early Lê Period; cuboid bricks decorated with chrysanthemums of the Restored Lê Period used for ventilation, among others. The unearthed artefacts have created a huge impression on us about the dexterity and the original cultural identity of our forefathers.

Scientists have all agreed that as a follow-up to the excavations in 2017 and 2018, the excavation in 2019 is of remarkable significance in shedding greater light on the complex of archaeological vestiges that have been revealed. As such, it contributes an important part to proving more clearly and comprehensively the presence of the artefacts and relics of the Lê Dynasty (Early Lê sơ, Mạc, Restored Lê) in this area. At the same time, it shows that the central section of the heritage site also features various types of relics of different historical periods overlaying one another for an uninterrupted length of more than 1300, from the Đại La, Đinh-Anterior Lê to the Lý, Trần, Lê dynasties. Scientists also proposed that in 2020 and subsequent years, the Thăng Long-Hà Nội Heritage Conservation Centre expand excavation work in the proximity of the 2019 excavation pits, especially the areas to the South and Southwest. It has also been proposed that excavation work focuses on the central axis of Đoan Môn – Kính Thiên – Hậu Lâu – Bắc Môn so as to garner more evidence for the restoration of Kính Thiên Palace space.