Doan Mon is one of the main entrances to the Forbidden City. Basing on construction materials and remaining architectural style of the relics, it can be affirmed that current Doan Mon was built under Le Dynasty and restored in Nguyen Dynastry. 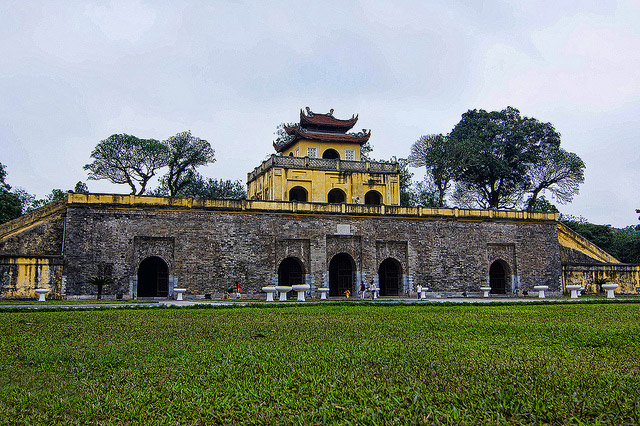 The monument is situated in the south of Kinh Thien Palace on the same axis with Hanoi Flag Tower. Doan Mon was built horizontally in U-shape. Doan Mon was built in the style of ancient city wall with five gates symmetrically erecting through a “deity axis”, also known as the “righteousness axis” of the Imperial Citadel.

The main architectural part followed watch tower gazebo style with three rolling arches. Rolling arch architecture at the gates not only brought graceful curves, but also had excellent load-bearing structures. Till now, the most modern and spectacular tunnel projects in the world are still using this architecture. 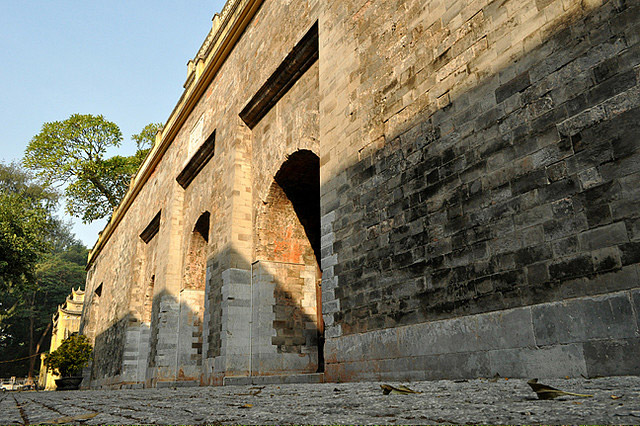 Materials are mostly wooden-hammer bricks, a popular type of bricks under Le Dynasty and rock which were used for building the arch. The distance from the east to west was 47.5 meters; from south to north 13m; the wings were 26.5 meters wide and 6 meters high.

The biggest middle door dedicated to the king was 4m high and 2.7 m wide. Both sides had 4 smaller doors which were 2.5 m wide and 3.8 m high dedicated for mandarins and other royal family members when being ordered with or to attend big ceremonies at KinhThienPalace.

The stone plaque carved with two words Doan Mon, mounted above the main door, was 1.5 m long and 0.7 m wide. On the two sides, there were small brick steps leading to the second floor. This floor had an area corresponding to the middle door. Due to being renovated to serve as the basis for the army, the old architecture could not be researched. On the roof of the second floor, a small communal house was built with the style of two-storeys and eight roofs. The two ends of the roof ridge were built with two dragons; the two gables were built with tigers; the four corners of the roof formed four crescent blades. 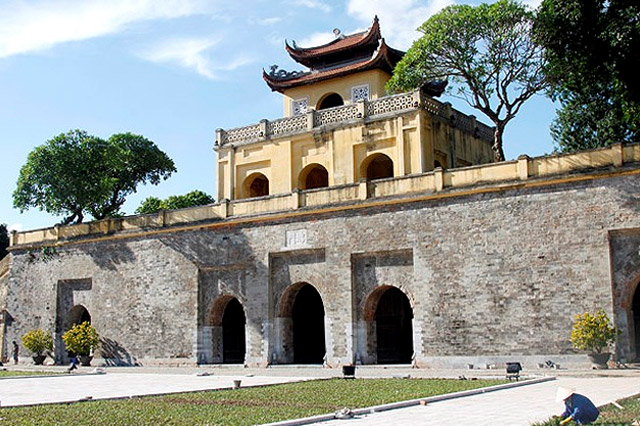 In 1999, archaeologists chose an excavation pit right in the middle of Doan Mon Gate to find traces of the Ngu Dao (Royal Faith) path. At a depth of 1.2 m, archaeologists found a paving stone border of Doan Mon Gate wall footing and a wooden-hammer brick paved courtyard under Le Dynasty. At the depth of 1.9 m, they also found traces of a path paved with “lemon flower” bricks under Tran Dynasty. According to north-south direction, the road is expected to last for more and it’s probably the path from Doan Mon Gate to Thien An Palace under Tran Dynasty. It is
noteworthy that in some paths under Tran Dynasty, Ly Dynasty bricks were still used. Thus the archeological results in Doan Mon reinforce the hypothesis about Doan Mon Gate that Ly, Tran and Le Dynasties were basically located in the same place.