At the end of Tran Dynasty, Ho Quy Ly, a mandarin wholeheartedly trusted by King Tran Nghe Tong acquired the authority of the court. After pressing Tran Thuan Tong to move the capital to the An Ton (in Vinh Loc district, Thanh Hoa province, which was home to Ho Quy Ly), Ho Quy Ly continued to force King Tran to cede the throne to his son Tran An. At that time, Tran An was 3 years old and was Ho Quy Ly’s grandson. After the coronation of his grandson in 1398, in 1400, Ho Quy Ly deposed King Tran, crowned himself to the throne. Then, Ho Quy Ly  called the new capital Tay Do (West Royal City), changed Thang Long to Dong Do (East Royal City) and assigned Ho Han Thuong (Ho Quy Ly’s son) to rule. 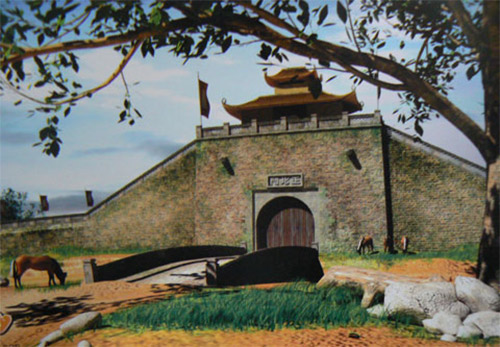 Despite moving the capital to Thanh Hoa Province, with the name Dong Do and appointment of his son to rule this place, it can be understood that Ho Quy Ly still considered Thang Long to be a royal city apart from Tay Do. In other words, Dong Do played the role as the 2nd capital of Ho Dynasty. Dong Do was still the place to welcome the Ming envoys and other foreign envoys and traders. Thus, in fact at that time, Dong Do remained a major center of politics, economy and culture. The prosperity of the city was still much higher than newly formed Tay Do.

Because he wanted to reduce the magnitude of Dong Do and increased Tay Do size to match the position of the capital, at the end of 1397, Ho Quy Ly ordered to unload parts of the palaces in Thang Long and transferred the materials to Tay Do to build more palaces. According to historical documents, the materials were transferred along rivers, however, more than half of them sank because of storms.

Thus, under Ho Dynasty, some royal architectural constructions of Thang Long – Dong Do were destroyed. However, much of the palaces remained the status quo.

In June 1407, Ming Dynasty’s military beat Ho Dynasty and invaded the country. Since then, King Ming renamed the country Giao Chi District, as an administrative unit of the Ming Dynasty. The chief town was Dong Do which was then renamed as Dong Quan to imply the removal of its position as the capital of an independent country. The name Dong Quan was used from 1407 to 1428, when Le Thai To defeated Ming Dynasty and crowned himself to the throne.

During the Ming’s domination, Thang Long – Dong Do was immersed in looting and rape conducted by Ming Dynasty’s army. Cruel rule of the Ming formed the people’s hatred and determination to expel the invaders. Therefore, along with the arts of wars of Le Loi, Nguyen Trai and other famous generals, the war against the Ming’s military won completely. After defeating the Ming, Le Loi crowned himself to the throne, renamed the country Dai Viet, set up the capital in old Thang Long and renamed Dong Do to Dong Kinh; Tay Do under Ho Dynasty was renamed Tay Kinh (West Royal City).