Attending the opening ceremony were Mr. Nguyen Van Phong, Deputy Secretary of the Hanoi Party Committee, Colonel Pham Xuan Tuan, Deputy Chair of the Department of Political Affairs under the General Staff, representatives of General Van Tien Dung’s family, witnesses of history, veterans and students of the Faculty of History, University of Social Sciences and Humanities.

Ribbon cutting ceremony of the exhibition

The exhibition is held in tribute to the enormous contribution to the national reunification of late General Van Tien Dung, a great general of “outstanding military talent, a communist with great resilience and indomitable spirit who dedicated his whole life to the Communist Party of Vietnam’s ideology, national liberation and the cause of building and defending the Socialist Vietnamese Fatherland.”

The exhibition features over 150 precious items and photos, clearly portraying General Van Tien Dung as an excellent general, a military talent and an eminent son of Hanoi.

In his opening remarks, Mr. Nguyen Thanh Quang, Director of the Thang Long – Hanoi Heritage Conservation Center stated that: General Van Tien Dung is an eminent son of Hanoi, a tactical general, a great scholar and warrior with utmost loyalty to the country and enormous contribution to the revolutionary cause of the nation. General Van Tien Dung had years of working at House D67 in Zone A of the Hanoi Citadel, the headquarters of Communist Party and Army. House D67 has become an outstanding historical and revolutionary relic for visitors and young generations to learn of the historical values in the Vietnam Revolution and the golden, unforgettable pages in Vietnam’s history. 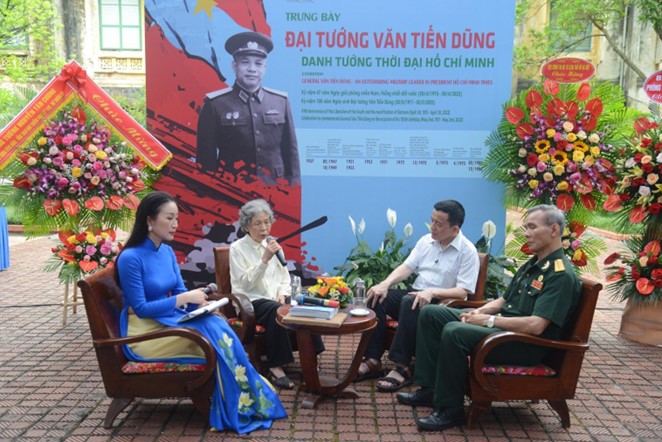 Talking to witnesses of history

At the opening ceremony, students of the Faculty of History (University of Social Sciences and Humanities) had the opportunity to talk to witnesses of history.

Through the sharing by General Van Tien Dung’s family members and other guests, the late General appears as a gentle and exemplary father, a talented military man, and a leader who is, though high-ranked, yet close, caring and considerate to his comrades and subordinates. All the stories and his belongings throughout the glorious revolution of Vietnam presented in the exhibition once again relive the fond memories of General Van Tien Dung.

Colonel Pham Tran Duc Bau, General Van Tien Dung’s secretary for 22 years was deeply touched by each and every of the general’s photos and belongings, recalling all the years assisting the strict yet neat and kind-hearted General.

The exhibition is open to visitors from April 28, 2022 at House D67, the revolutionary relic in the Imperial Citadel of Thang Long that is closely associated with General Van Tien Dung’s military career for many years.

The exhibition is also held online on the website: trungbayonline.hoangthanhthanglong.vn