Ancient wells in the Imperial Citadel

Throughout the history. FFFF, water has always played an important role in human life. The fertile land is almost near to abundant water sources. Not only depending on natural water sources such as rivers, lakes, ponds and creeks, Vietnamese people have exploited and used abundant groundwater sources which are cleaner and cooler than pond, lake, river and stream water. However, it was difficult for few households to get this precious source of water. So, wells were often dug by the entire village. That is why the cultural village is associated with the banyans, well and communal house. 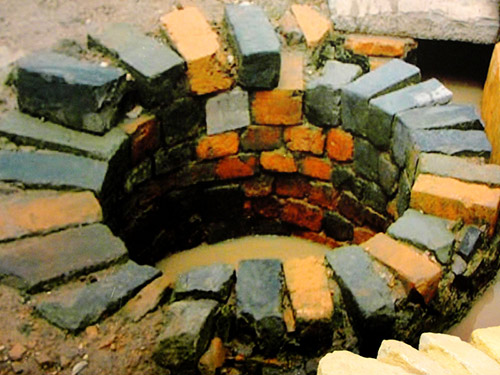 Wells under the Tran Dynasty in Thang Long Imperial Citadel

However, in palaces, with strong economic potentials, the king ordered to dig wells wherever convenient for the daily life of the king and royal family, or even simply for the feng shui criteria. Therefore, only in the archaeological area of about 3.3 hectares at 18 Hoang Dieu, archaeologists have found 26 ancient wells. All of these wells belonged to the palaces whereas the area of 3.3 hectares was even less than the average area of a village.

The oldest well detected in the Thang Long Imperial Citadel was Dai La well, from the 7th century to the 9th century. Its depth was 5.9 m. The well wall was built with bricks in which four lines of horizontal bricks were interspersed with one vertical line. Bricks were placed close enough to prevent the ground, mud soaking into wells, but only keep clear groundwater. This feature is found in all the ancient wells in Thang Long Imperial Citadel.

The surface brick layer of the wells under Dai La era was wooden-hammer bricks under the Ly Dynasty. This shows that the Ly Dynasty took advantage of the wells available from Dai La era to serve to the needs of living in the palaces. It is also the clearest evidence that King Ly Thai To inherited and promoted the positive values of old Dai La Citadel and did not waste money to renew all the things in the Imperial Citadel.

Under the Tran Dynasty, with the development of the Imperial Citadel, many constructions were built and the demand for water was higher. Therefore, the Tran Dynasty dug more wells with distinctive architectural style. Wells under the Tran Dynasty were built with herringbone architecture, a very smart way of building due to higher durability in the absence of adhesives among the bricks. The bricks arranged diagonally and uninterruptedly formed a strong link which was not easily broken, however large the force was. This is clearly demonstrated with the existence of relatively intact wells under the Tran Dynasty, although the Imperial Citadel has gone through so many wars, arsons, earthquakes and floods, etc.

To the Le Dynasty, wells were developed from the building materials. Wells under the Le Dynasty were almost built with rock, including boulder, rubble or slate. This was a technical step in digging deep wells, because rock worked very well at purifying underground water. Therefore, water from the deep well built of rock was often purer, cooler and sweeter than that from wells built with usual red bricks.

Wells in the Imperial Citadel were not only dug to meet the needs of daily life, but also for wishing for blessing according to feng shui. This explains why in the Thang Long Royal Citadel archaeologists and scientists have found some very small diameter wells which were not for providing drinking water.

Ancient wells found in the Imperial Citadel were a big surprise to scientists on the strength and purity of the water. This shows that, the deep well digging technique of Viet people in ancient times was sublime.