Ha Long Bay, in the Gulf of Tonkin, includes some 1,600 islands and islets, forming a spectacular seascape of limestone pillars. Because of their precipitous nature, most of the islands are uninhabited and unaffected by a human presence. The site’s outstanding scenic beauty is complemented by its great biological interest. 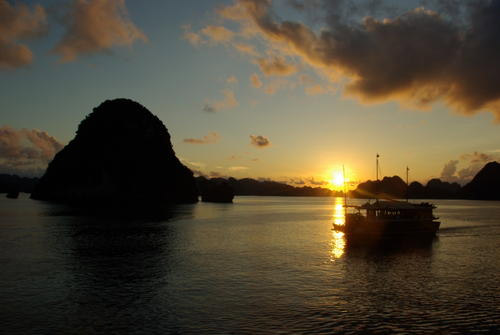 Ha Long Bay, located in the Gulf of Tonkin, within Quang Ninh Province, in the northeast of Vietnam, is165 km from the capital of Ha Noi. Covering an area of 43,400 ha and including over 1600 islands and islets, most of which are uninhabitated and unaffected by humans, it forms a spectacular seascape of limestone pillars and is an ideal model of a mature Karst landscape developed during a warm and wet tropical climate. The property’s exceptional scenic beauty is complemented by its great biological interest.

The outstanding value of the property is centered around the drowned limestone karst landforms, displaying spectacular pillars with a variety of coastal erosional features such as arches and caves which form a majestic natural scenery. The repeated regression and transgression of the sea on the limestone karst over geological time has produced a mature landscape of clusters of conical peaks and isolated towers which were modified by sea invasion, adding an extra elemant to the process of lateral undercutting of the limstone towers and islands.

Criterion (vii): Comprised of a multitude of limestone islands and islets rising from the sea, in a variety of sizes and shapes and presenting picturesque, unspoiled nature, Ha Long Bay is a spectacular seascape sculpted by nature. The property retains a high level of naturalness, and despite its long history of human use,  is not seriously degraded. Outstanding features of the property include the magnificent towering limestone pillars and associated notches, arches and caves, which are exceptionally well-developed and among the best presented of their type in the world.

Criterion (viii): As the most extensive and best known example of marine-invaded tower karst in the world Ha Long Bay is one of the world’s most important areas of Fengcong (clusters of conical peaks) and Fenglin (isolated tower features) karst. Abundant lakes, occupying drowned dolines, are one of the distinctive features of the Fencong karst, with some appearing to be tidal. Possessing a tremendous diversity of caves and other landforms derived from the unusual geomorphological process of marine invaded tower karst the caves are of three main types: remnants of phreatic caves; old karstic foot caves and marine notch caves. The property also displays the full range of karst formation processes on a very large scale and over a very long period of geological time, possessing the most complete and extensive exzample of its type in the world and providing a unique and extensive reservoir of data for the future understanding of geoclimatic history and the nature of karst processes in a complex environment.

All elements necessary to sufficiently protect the outstanding scenic and geological values of the Ha Long Bay property are included within the boundaries of the property and its size and area provide sufficient integrity for the large scale geomorphological processes to operate unhindered. It benefits from being completely surrounded by a large and extensive buffer zone with both the size and area providing sufficient integrity for the large scale geomorphic processes to operate unhindered.

Located within an area of high tourism, marine transport, fisheries and the daily activities of people living and conducting their business on Ha Long Bay, management of the area, instituted since inscription of the property, applies strict regulation and control of activities in an attempt to minimize impacts on the integrity of the property. There is a continuing challenge to improve the integrity and quality of the environment. The natural scenic features, geomorphology, landform values and cultural heritage along with key features such as islands, caves and grottoes remain intact and the property retains a high level of naturalness despite the long history of human use in the area.

Ha Long Bay was established as a historical and cultural relict and classified as a National Landscape Site in 1962. Subsequently designated as a Special National Landscape Site under the Cultural Heritage Law amended in 2009, land tenure is held by the Provincial Government. The property is protected effectively by a number of relevant provincial  and national laws as well as governmental decrees including; the Cultural Heritage Law, the Bio-Diversity Law, the Tourism Law, the Environmental Protection Law, the Fishery Law and Marine Transport Law. Under these laws, any proposed action within the property that could have significant impact on the property’s values must have official approval from the Ministry of Culture, Sports and Tourism, along with other relevant ministries.

The Ha Long Bay Management Department was established after the inscription of Ha Long Bay on the World Heritage List, with the main functions of management, conservation and promotion of the property’s values. The Department takes into account the requirements of the World Heritage Convention, recommendations of the World Heritage Committee and other regulations issued by both the Vietnamese Government and the Quang Ninh Province. Day-to-day management involves collaboration with various relevant stakeholders at different levels, especially local communities, to maintain the integrity of the property and monitor socio-economic activities.

Socio-economic activities on Ha Long Bay are well regulated, carefully observed and effectively managed. Management and protection are further strengthened through regulations, master planning, and action plans at the provincial level. These include regulations on operation of tourist boats, mud dredging, land filling, fishermen and floating house management. They also provide for education and promotion, and enhancing community awareness of heritage values and their protection. There are several specific plans dealing with environmental protection, tourism development and management and conservation planning. These include Ha Long Bay to 2020, the master plan on conservation, management and development of the values of World Natural Heritage approved by the Prime Minister in 2001, and the Comprehensive Management Plan for the Ha Long Bay World Heritage Site 2010 – 2015 approved by the provincial authority in 2010.

In the long-term, management of the property will focus on: ensuring the integrity of the scenic, geological and geomorphologic values, as well as the property’s environment; strengthening the legislative provisions; carefully monitoring of the socio-economic activities on Ha Long Bay; increasing the use of technology in heritage management; undertaking research to gain better understanding of the property’s  values; improving the staff capacity and enhancing community awareness and involvement.

Increasing visitor numbers and associated impacts continue to impact on the management of the property. The sensitivity, aesthetic quality and attention to public safety of infrastructure such as pathways, steps and boardwalks is of a high standard and with steadily increasing visitor numbers the quality of visitor management is also steadily improving. Development pressures associated with growing tourist numbers continue to be an issue for government authorities and an appropriate balance between conservation and development, while difficult to maintain, is important to ensure the protection of the natural values of the property.

Ha Long Bay, situated in the Gulf of Tonkin, includes some 1600 islands and islets forming a spectacular seascape of limestone pillars. Because of their precipitous nature, most of the islands are uninhabited and relatively unaffected by human influence.

The geomorphology of Ha Long Bay is known as a drowned karst landscape due to the exceptional combination of its limestone karst features which have been subject to repeated regression and transgression of the sea over geological time. The limestones of Ha Long Bay have been eroded into a mature landscape of fengcong (clusters of conical peaks) and fenglin (isolated tower features) karst features, modified by sea invasion at a later stage.

The smaller islands are fenglin towers of 50m to 100m high with height. Many have vertical walls on all or most sides and these continue to evolve by rock falls and large slab failures.

Marine invasion of Ha Long Bay has added an extra element to the normal process of lateral undercutting of the limestone towers and islands. The most conspicuous feature being the main notch cut into the entire rocky coastline. Notches are a feature of limestone cliffs worldwide, but those of Ha Long Bay are exceptionally well developed and, at many sites, extend into arches and caves. This process of undercutting and subsequent erosion maintains the steep faces of the fenglin karst towers and thereby perpetuates the spectacular nature of the landscape.

A distinctive feature of Ha Long Bay is the abundance of lakes within the larger limestone islands.

Extensive limestone caves represent another important feature of Ha Long Bay, with three main types able to be identified: old phreatic caves formed below the water table of the time; old karstic foot caves formed by lateral undercutting of cliffs at base level; and marine notch caves formed at sea level where rock structures are powerfully eroded and eventually reduced to a wave cut platform.

In summary, Ha Long Bay possesses a tremendous diversity of caves and other landforms which derive from the unusual geomorphological process of marine invaded tower karst. These areas provide a unique and extensive reservoir of data for the future understanding of geoclimatic history and the nature of karst processes in a complex environment.

28 April 1962. Established as a historical and cultural relict and national scenic spot under Decision No. 313/VH VP, issued by the Minister of Culture.