Hanoi commemorates the 59th anniversary of the Capital Liberation Day 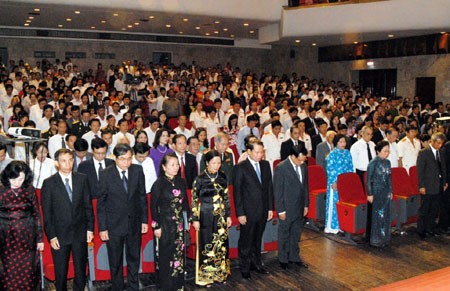 The anniversary is began with a solemn ceremony celebrating the national anthem, in moved atmosphere with special ceremony, all delegates take a minute paying homage to the late General Vo Nguyen Giap – who the people paid his last farewells the people and country.

After 59 years, Hanoi, from a city with the area of about 130km2, having approximate 400,000 people, has currently become a large city and is more and more spacious, modern; has the area of 3,344km2, population of over 7 million people. Despite the difficulties still exists, but Hanoi Capital is ‘instead of skin, flesh change” each day. That change has brought about tremendous material and spiritual resource, made up the Capital’s power and strength, formed new strength of army force and people of Hanoi Capital.

According to the Chairman Nguyen The  Thao, accomplishments of 59 years of protection, construction, development of the Capital associated with the wise leadership of the Party, the beloved Uncle Ho, the leaders of the Party, the State, the practical and effective assistance of the ministries, departments, branches, central union and fellow, soldiers nationwide.

Those accomplishments are generated from the spirit of solidarity, labor, creativity, tireless struggle of generations of cadres, party members, fellow, and soldiers of the Capital 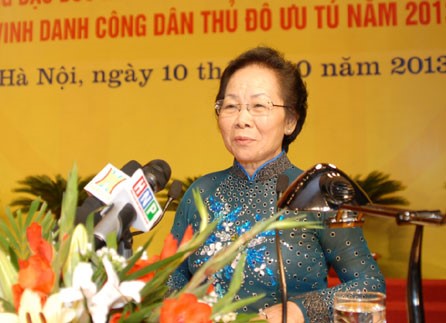 In the patriotic emulation movement in the Capital, the most special movement is the “Good people, good deeds” movement. This is a vivid picture of feelings, responsibilities, mettle and exquisite talent of Hanoi people in the relentless struggle for the prosperous, civilized and modern Capital.

Year 2013 is the 21st year when Hanoi city has organized the closing ceremony, praised typical “Good people, good deeds”, and is the 4th year of awarding the title of “Elite capital citizens”. Especially this activity in this year has a deeper meaning when it is attached to the demonstration of typical examples in 2 years of implementing the movement of “Study and follow the moral example of Ho Chi Minh” under Directive no. 03 – CT/TW issued by the Ministry of Politics.

The Chairman Nguyen The Thao has stressed, the collectives and the individuals who are honored, although in any field, on any working position, by daily particular and practical works, have demonstrated patriotism, beloved spirit to Uncle Ho, training effort spirit, resilient and courageous striving will, mutual affection and mutual love, determination to enrich for the native land and country. It really is the shining, vivid, convincing and strongly convertible examples contributing to improvement of awareness, thoughts, feelings, arousal and multiplication of positive aspects in every human. 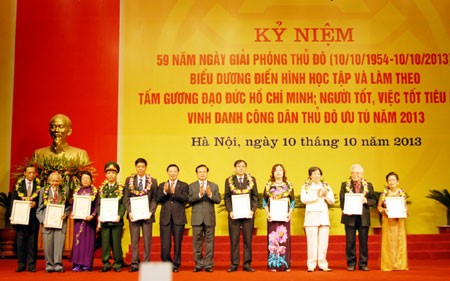 Upon announcement of decisions made by the Municipal Council for Emulation and Reward, Secretary of the Municipal Party Committee Pham Quang Nghi and Chairman of the Municipal People’s Committee Nguyen The Thao have awarded the Certificate of Merit, reward to typical individuals, collectives who have been gloried by the City in 2013.

Speaking at the ceremony, Deputy chairwoman Nguyen Thi Doan has been on behalf of the leaders of the Party and State to praise the valuable contributions of all the excellent workers, excellent examples of the city and especially, 1,084 collectives, individuals who were honored today.

Deputy chairwoman has affirmed that the Party, State and people always recognize and highly appreciate the valuable contributions of cadres and people of Hanoi city to the revolutionary career of the people, the country through the patriotic emulation movements.

Deputy chairwoman Nguyen Thi Doan has requested Hanoi city, in the future, to maintain and further strengthen more emulation movements; study movement and follow the moral example of Ho Chi Minh. Such movements become regular and import job of the Party organizations, agencies and units, each Party members and the people, it must promote exemplary and vanguard role of Party members, especially leaders, managers at all levels to create a new atmosphere “one and all men, one and all branches take part in the emulation movement”, the movements need to strongly provoke the sense of responsibility of each party cadre and the people to participate in the construction of the Capital, development of the country.

Deputy chairwoman has kindly suggested Hanoi city to well implement propaganda and education to raise awareness of the great value of patriotic emulation thoughts and moral example of Ho Chi Minh to deter recession of political ideology, ethics and lifestyle; strengthen confidence of the people into the Party, the State and the socialist regime.