Hau Lau is about 2.392m2, once known as Tinh Bac Lau (Palace that keeps the North peace), was built after the Later Le dynasty, the whereabouts for living and daily activities of the queen and the princess. Under Nguyen Dynasty, Hau Lau was used as the residence of imperial concubines and followers who accompanied the King to Bac Ha. 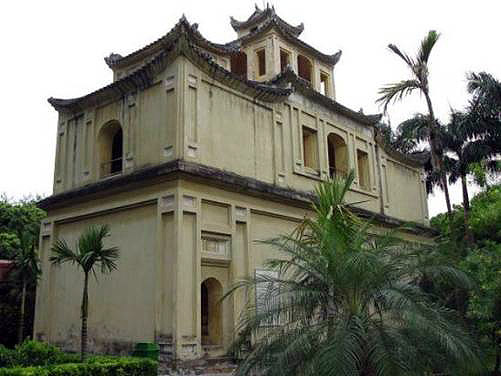 The palace was built of bricks; the lower part has rectangular parallelepiped shape. The lower floor had three levels of roof; the upper floor had two levels of roofs. Lầu dưới có ba tầng mái, lầu trên là hai tầng mái.The roof modeled after Vietnamese traditional architecture of multi-level roof with crescent blades; the entire roof was built with brick and concrete structure but the outer surface was built like tiles.

The French called Hau Lau as PrincessPalace or Pagoda des Dames (Pagoda of women). Cuối thế kỉ 19, Hậu Lâu bị hư hỏng nặng, sau này người Pháp đã cải tạo xây dựng lại như hiện nay. At the end of the 19th century, Hau Lau was severely damaged. Later, it was renovated and rebuilt by the French as it is at the present.

In 1998, with the consent of the Ministry of Culture and Information, the Institute of Archaeology in collaboration with the Management Board of Hanoi scenery held 2 stages of archaeological excavation into two holes at the ruins of Hau Lau. 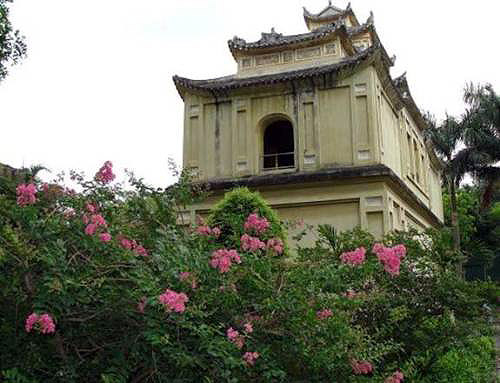 With such architectural vestiges unearthed, we can say that for the first time in the history of the study of Thang Long – Hanoi, along with the archaeological exploration digging in Doan Mon, researchers have found traces of the foundations of many architectural styles and historical periods with different characteristics.Khu vực này cách điện Kính Thiên không xa và theo sử cũ, là nơi có nhiều cung điện, lầu gác của triều đình. This area was not far from Kinh Thien Palace, and according to the old history, was home to many palaces and imperial houses.Như vậy có thể khẳng định một lần nữa Hậu Lâu nằm trong khu vực trung tâm của Hoàng Thành Thăng Long thời Lý – Trần – Lê. So it can be confirmed again that Hau Lau was located in the central part of ​​the Thang Long Imperial Citadel under Ly – Tran – Le Dynasties.