During the feudal period, stone was a popular type of construction materials due to high durability. At the exhibition area in Hanoi Ancient Citadel, there are still a large number of stone artifacts unearthed within the Imperial Citadel. Each object contains its cultural stories which highly represent for each historical period.

At Hau Lau in 1998, archaeologists conducted archaeological excavations. As a result, thousands of ceramics, building materials and architectural decorations of Ly, Tran, Le Dynasties were found.  Particularly, at a depth of 3.2 m, the scientists found column base rock pedestals carved with Ly Dynasty lotus leaves. The precious objects have allowed scientists to judge: archaeological excavation area is situated within the ancient Thang Long Imperial Citadel. 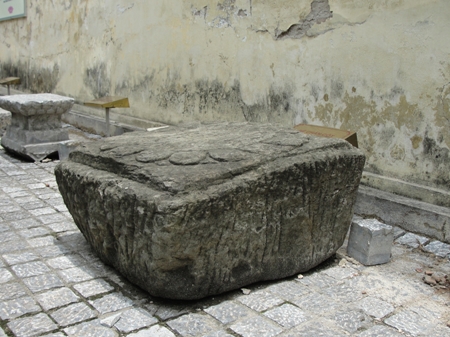 Column base stone pedestal under Ly Dynasty was square. On the surface, in the middle, there was a circle which was the position for supporting the pole. Around the central circle, there was a layer of lotus petals. Therefore, overall, the column base pedental under Ly Dynasty looked like a lotus, embracing the pole. Lotus was a symbol of Buddhism. Under Ly Dynasty, Buddhism was considered to be the state religion. That was the period when monks had a very high position in society who were respected and able to participate in politics. Therefore, the image of lotus and lotus petals appeared a lot in constructions and was decorated on many utensils under Ly Dynasty.

Entering Le Dynasty, Confucianism gradually occupied the No. 1 position; Buddhism was not  a unique religion. Therefore, the image of lotus calyx and petal were not widely used anymore. Hence, the column base pedestals under Le Dynasty also did not have decorative image of lotus. It was merely a square stone, engraved with a circle on the surface to support the column base.

Column base stone pedestal is just one of the many items and materials used in the ancient feudal dynasty. Being a stone pedestal, but it contains all the layers and levels of distinctive culture for each period. Furthermore, with ornaments or other important items, the cultural significance is probably much deeper.