Ly Thai Tong’s taboo name was Ly Phat Ma, also known as Ly Duc Chinh (the works “Annam chi luoc” by Chinese author also agreed that the taboo name of Ly Thai Tong was Ly Duc Chinh). He wa born on June 26, 1000, the eldest son of King Ly Cong Uan. The Complete History of Dai Viet mentioned the story of Ly Phat Ma at birth as follow: Ly Phat Ma was born with 7 moles in the shape of the Big Dipper on the back of his neck. At that time, in Truong Yen District, a buffalo suddenly changed his horns. The owner of the buffalo was worried because he thought that was a bad luck. A fortune teller in Cau Dong chanced on him and said: “This is an omen of innovation; it does not involve in you and you do not need to worry”.  Then, the owner stopped worrying. Later, Early Le Dynasty became rotting, the country changed when the Ly took over to rule the country. 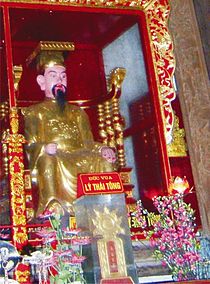 Ly Phat Ma was established as the crown prince in 1012 and was ordained Khai Thien Vuong. King Ly Thai To built his son’s palace outside of the inner palaces so that the son could communicate with the mandarins and people and accumulated the living experience. During this period, Crown Prince Ly Phat Ma was assigned the task to quell rebel troops and achieved a lot of great success.

In 1928, Ly Thai To passed away. Not having organized the funeral for the father, three princes Vo Duc Vuong, Duc Thanh Vuong and Dong Chinh Vuong sent troops to lay siege to their elder brother Prince Khai Thien Vuong. When the battle between Crown Prince Khai Thien Vuong and the brothers began, Martial art General Le Phung Hieu glared at Prince Vo Duc Vuong and shouted: “You eye the throne, contempt the King, forget the favor of the Late King, contrary to the moral principles between the King and the mandarins. So, Phung Hieu has to use this sword.” Right after that, Phung Hieu galloped his horse to Vo Duc Vuong and slashed him to death in the battle. The other princes were so terrified that they surrendered. Being tolerant, Ly Thai Tong did not punish the two brothers and restored the positions.

To avoid the fighting over the throne recur, Ly Thai Tong stipulated that annually, all mandarins had to go to Dong Co Temple (Yen Thai, Hanoi) and perform ceremonial oath: “A child needs to be respectful; a subject needs to be faithful. Unfaithful and irrespectful people will be punished by the God”. Those who did not attend this ceremonial oath would be caned.

Being well trained from his childhood, Ly Thai Tong was well-known in the region. He led the army and quelled Champa disturbances and rebels. In 1044, Champa aggressors disturbed at the border, Ly Thai Tong led his troops, attacked to the capital of Champa and slashed Champa King to death. Since then, the territory was peaceful. In the northern border region, the Nung rebelled against the court, self-proclaimed King, named the country and sent troops disturb the people. King Ly Thai Tong himself led the army to quell the rebels, captured the ringleader of the rebels, Nung Ton Phuc and his wife and children. However, the son Nung Tri Cao escaped and continued to revolt, pillaged the land and self-proclaimed King. Ly Thai Tong sent troops to fight against Nung Tri Cao and captured him. To show mercy, Thai Tong spared death for Tri Cao, ordained him Quang Nguyen Muc with the title of Thai Bao. However, Tri Cao still wanted to proclaim himself king. In 1048, Tri Cao proclaimed himself King Nhan Hue. Then, he was defeated by royal general Quach Thinh Dat and had to flee to China. There, Tri Cao conquered Ung Chau and other eight districts in Guangdong and Guangxi of Song Dynasty.

About policies to reign the country, Ly Thai Tong combined laws and virtues. Due to this policy, the society under the reign of King Ly Thai Tong strongly developed.

With the policy of using laws to reign the country, in 1042, King Ly Thai Tong ordered to write “Hinh thu” (Laws). This is the first written laws of our country, opening up a new era for the legislative history of Dai Viet.  Unfortunately, this code was robbed and destroyed by the Northern enemy later. Thus, the posterity lost a precious documents.

Despite issueing “Hinh thu”, King Ly Thai Tong advocated teaching the people, not penalties. For the misdemeanors, Ly Thai Tong stipulated that the offenders could pay money for atoning the crime. Therefore, the society had fewer social disorders.

Ly Thai Tong was also good at making the best use of human resources. During crop failure or famine, or after combating enemies, the king offered tax breaks for the people. So, people were happy and wholeheartedly followed him.

King Ly Thai Tong reigned for 27 years. He passed away in 1054, at the age of 55. Being a scholar and a warrior, who was very benevolent, Ly Thai Tong deserves to be ranked as one of the good kings in the feudal history of Vietnam.