My Chau temple is lay inside Co Loa pagoda, a place for Buddhist worship, with the architecture in form of “nội công ngoại quốc” (internal shape looks like Chinese character “cong” 工 and external shape looks like character “quoc” 国), character 工 is located in the center, in font is the interior altar hall and both sides are corridors. The Pagoda keeps storing the four supernatural creatures of the 19th century, and the valuable relics including 134 statues lay in the back hall, incense burner, interior altar hall, corridors and maternal divinity worship hall. 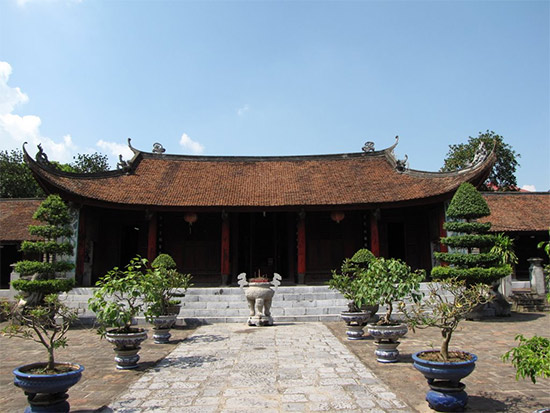 Inside the pagoda, there is a small temple worshiping a statue without a head in nice and smart decoration. According to the local residents, this statue reminds of Princess My Chau who was beheaded by her father king for her betrayal as told in the legend.

The legend tells that, when King An Duong Vuong lost ground in Co Loa citadel, he rode on horse together with his daughter, Princess My Chau, leading to the South. Upon arrival at Mo Da mountain pass (Dien Chau, Nghe An), with his exhausted power, he faced with the East sea in front and was followed by the enemy. King An Duong Vuong asked St. Kim Quy (Magic Turtle) for help, the magic turtle appeared and said: “the enemy is sitting right behind you!”. The king immediately drew his sword and decided to behead My Chau. Before dying, My Chau kneeled and hugged the father and said: “How unfair it is. If I were unfaithful and had a scheme to harm you, my body would turn into ash, otherwise it would turn into gemstones to serve you”.

Later on, Co Loa local residents spread by mouth the thrilling tale that when casting a net into Hoang Giang river, some fisherman harvested a statue in the shape of a person sitting with fold legs and hands on kneels but without a head. 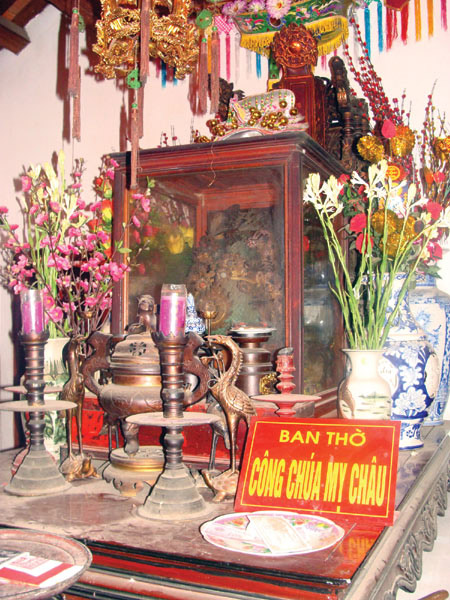 Finding the statue not special at all, fishermen returned it into the river. But strangely, the statue had been captured in various times of their nets. Believing it to be an omen, people called on each other to pull it out of water and made rituals to welcome the statue for worship. The respected elderly in the village prayed: If you have supernatural power, please come back to your right place so that we can set up a temple for worshiping you. In fact, while people were carrying the statue, the hammock broke right at the place of current My Chau temple, lying to the left of Di Quy shrine.

People believe that this is the statue of Princess My Chau which proves her words earlier, drifting backward via East sea to the Original for serving her father king. Since then, each year one person is assigned to take care of the temple, that person must have good conduct, sufficient family members and successful children.

Because of the above touching tale, My Chau temple is said to be very effective for those who wish for love and family happiness.