Nung Mountain – To River, the famous places in Thang Long Imperial City, which were regarded as “Nung Moutain of indomitable spirit” and “To Lich Deity River”. However, there are different interpretations of the place where “Nung mountains” was situated in the imperial city. 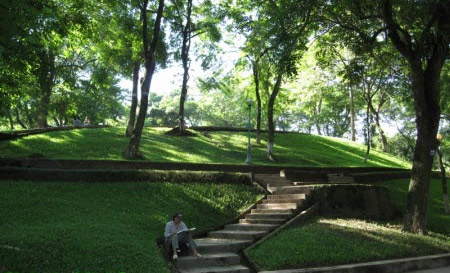 Nung Mountain was not Sua Mountain

Previously, researchers Tran Huy Ba and Hoang Dao Thuy agreed that Nung Mountain was the mound (actually this was Sua Mountain) which still exists in Bach Thao Park. Many people have speculated in this way.

Explanation for their conjecture, these people rely on the elevation of the mound and the information that the French found the stone columns carved with dragon images in Bach Thao area during French domination time.

However, many scientists have disagreed about the theory that “Nung Mountain was situated in Bach Thao Park”.

According to the criticisms, the stone columns found in Bach Thao Park were not fixed traces that can be used to verify the coordinates of Nung Mountain.

On top of this mountain, there is a small temple worshiping King Black. The inscription on the plaque of the temple is “Sua Mountain Temple”, i.e. the temple on Sua Mountain. Sua trees (scientific name is Dalbergia bouruana gagu) is a precious species of timber; before they grew in forest on the mountain, hence the name of the mountain was Sua Mountain. 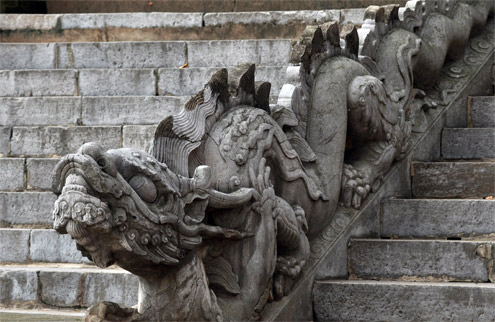 Nung Mountain was not Voi Mountain

Other people say that Nung Mountain was Voi Mountain by Hoang Hoa Tham Street, because this was the highest place in Hanoi.

Proponents of this theory also quote the verses of King Thanh Thai about Nung Mountain, meaning that the cloud on Nung Mountains Nung mirrored the colour of the present and the past. They think that a mountain with clouds must be a high mountain.

After this theory appeared, many historians have said that Nung Mountain could not be Voi Mountain.

The criticisms also quote many old sayings such as “a meter height can be considered to be the height of a mountain” or “A mountain is sacred not because of its height but because it has deities.”

Evidently, all can see that in 1902 when King Thanh Thai wrote the verse, Voi Mountain could not reach the level of “surrounded with clounds”. Because, Hanoi could not be built up so quickly that almost leveled a mountain which reaches the clouds after over 100 years.

Nung Mountain was the foundation of Kinh Thien Palace

In the interpretations of the location of the Nung Mountain, most historians agree that Nung Mountain was the foundation of Kinh Thien Palace which remains traces to this day.

Historian Phan Huy Chu wrote in “Hoang Viet Dia Du Chi” (Vol 1) as follows: “Nung Mountain was located in the middle of the royal city. After setting up the capital, Ly Dynasty built the court palace on the mountain. Under Le Dynasty, it was Kinh Thien Palace. Today (Nguyen Dynasty), it is the palace in front of the royal palace. Legend has it that in the centre of the mountain, there was hole to ventilate lakes and mountains; thus, it was called Long Do (Dragon navel)”.

“Dai ​​Nam Nhat Thong Chi” (Vol 2) of the Nguyen also recored that “Nung Mountain is situated within the royal city, known as Long Do Mountain. Ly Thai To set up the capital, built the court palace on the mountain. Under Le Dynasty, it was called Kinh Thien Palace. The ruling dynasty (Nguyen Dynasty) uses as the royal step-over palace with the same name. Under Thieu Tri reign, the third year, its name was changed to Long Thien Palace; Dinh Palace is on nine steps platform in Nung Mountain; there are two dragons longer than 4 meters on both sides, produced from Ly Dynasty”.

Historian Tran Quoc Vuong also provides another convincing evidence: On debris of the stele erected from Minh Mang reign in Am Pagoda (now in North Gate, Hanoi), it is also clearly stated: This pagoda is built right behind Nung Mountain; the northern side overlooks Ma Canh Lake (this lake was clearly shown in the map of Hanoi dating from King Tu Duc’s reign, 1873).

From this evidence, combined with Hanoi map in 1873, Professor Tran Quoc Vuong affirmed that Nung Mountain was the foundation of Kinh Thien Palace which still remains in Hanoi ancient citadel.

According to Dr. Nguyen Van Son, Director of the Center for Thang Long-Hanoi Heritage Conservation, the hypotheses that Nung Mountain was located in Bach Thao Park or Voi Mountain by Hoang Hoa Tham Street are mistaken. “Saying that Nung Mountain as the foundation of Kinh Thien Palace is too low is not true. Over a thousand of years, Hanoi has been changed much, thus the height of Nung Mountain was not the same. Furthermore, in order to build a palace on Nung Mountain, they had to level the mountain”, Mr. Son said.

Mr. Son also agrees with the comments that Nung Mountain was the place where Kinh Thien Palace was built on, known as Thien An Palace, Can Nguyen Palace under Ly – Tran Dynasties. Thus, basing on historical documents and other evidences of scientists, it can be confirmed that Nung Mountain was the foundation of Kinh Thien Palace- which preserved the masterpiece of double stone dragons in Hanoi ancient citadel. This was the place where kings of the Ly, Tran and Le gave audience, i,e, the center of Thang Long Imperial Citadel.