Based on the research results, the Thang Long-Hanoi Heritage Conservation Center, in collaboration with the Thang Long Cultural Heritage Association and Y Van Hien Company, experimented with the tiến lịch activity, consisting of 2 parts: (1) Display the paintings re-creating the space of the calendar offering to the kings’ ritual with the models simulating the artifacts of the coverage of the ngự lịch (kings’ calendar), quan lịch (mandarins’ calendars), and the process of composing, inscribing, printing, and binding the calendar. (2) Practice the ritual of Tiến lịch on the yard of Kinh Thien palace. The ritual was enacted in the theatrical format, including major scenes like: the ritual of mandarins entering the court; the ritual of Tư Thiên Giám (The Director of the Imperial Observatory) offering the calendar to the King; the ritual of Truyền chế mandarin reading the King’s messages; the ritual of giving the calendar to the mandarin. 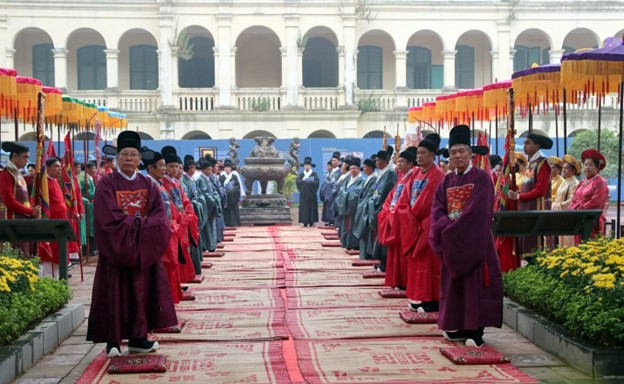 The King’s calendar simulation on display

Because of Covid-19 pandemic, the heritage site had not been open to visitors yet. However, in the Imperial Citadel of Thang Long, activities and rituals were still held in Tet, strictly following the traditional rituals, and were recorded for promotion and online display.

The online display titled “The ritual of offering the calendar to the King in spring” enacted the ancient Tet atmosphere with traditional customs such as wrapping “banh chung”, worshiping ancestors, hanging Tet pictures and Tet couplets, wishing Tet greetings, asking the calligraphy master for a first letter of the year, etc… Especially, there were documents and pictures about the process of making calendars as well as issuing the calendars of the Le Dynasty, simulating the coverage of ngự lịch (king’s calendar).

According to official history, every year in the middle month of the spring (February), the court had the calendar of the new year compiled. The king approved and ordered to inscribe, print, and bind it. On December 24 (Lunar Calendar), in the dragon courtyard of Kinh Thien palace, the court solemnly organized the ritual of offering the calendar to the king. Then, the king gave the calendars to mandarins and people to begin a successful, favorable working and farming year.

Under the Le dynasty, Tư Thiên Giám (司天監) was an agency in charge of astronomy and calendars under the Ministry of Rites. This agency was responsible for forecasting the weather, seeing whether the date and time were good or bad and compiling the annual calendar. The work of compiling the calendar was carefully conducted by Tư Thiên Giám with many stages of careful reviewing and validating before approval.

According to Lịch triều hiến chương loại chí (Categorized records on Administrative systems of successive dynasties), from February, Tư Thiên Giám was responsible for researching, calculating, and compiling the Gregorious calendar for the new year. The completed manuscript was presented to the king for reviewing and approval. Then the King ordered the Trung Thư Giám (an agency which is responsible for the king’s policies) to rewrite it seriously and assigned Tri Giám, an agency responsible for looking after the work of writing the engravings and inscribing them to the woodblock. When the engravings were completed,  Tư Thiên Giám received them for careful comparison and review of every sentence, word, and mark. After that, the Tư Thiên Giám proceeded to print and bind the calendar. At the beginning of December, (Lunar Calendar), Tư Thiên Giám chose a good date and time to seal the calendar, and with other specialized agencies in the Ministry of Rites, organized the ritual of offering the calendar to the king and giving calendars to mandarins from central to local levels.

The ritual of tiến lịch was described in Lê triều Hội điển (Le dynasty annals) as follows: “On December 12 (Lunar Calendar), the calendar submitting ritual was organized. In the morning of that day, the princes, marquesses, counts, and mandarins, under the orders of the king, all dressed in court clothes to perform the ritual. After completing the ritual, Tư Lễ Giám (the Officers of the Judiciary) placed the calendar at the ngự tiền (a place near the king) to present it to the king, then Lễ Khoa gave the calendar to the mandarins”.

There were are three types of calendars: ngự lịch with only one copy presented to the king; quan lịch was given to princes, marquesses, counts, and mandarins from central to local levels; and dân lịch (people’s calendar) was given to the people. There were differences among types of calendars in terms of their forms, such as decorative motifs on the cover of the calendar or paper material for printing. However, the content was basically the same. 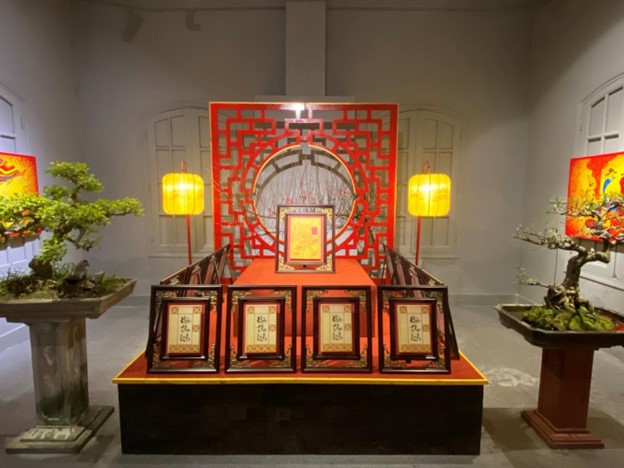 The rituals of offering calendar to the kings and issuing calendar to others showed the feudal court’s appreciation towards calendar making as well as its attention to the weather, climate, good date and time, and favorable climate conditions for agricultural production and for the daily life of the court and people.

The king, the royal family, and the court used the calendar to organize and administer the activities of the court, including sacred and worship ceremonies, festivals, etc. The administrative work of the mandarins in the capital as well as in the local offices was based on the general schedule prescribed by the state. The calendar also played a very special role for the people. They checked the calendar to keep track of the proper time and weather for farming, or watched for weather changes so as to timely respond to and prevent natural disasters.

Therefore, the rituals of calendar offering to the king and calendar giving to the others were solemnly organized at the special time of Tet, beginning a new year with wishes for peace, happiness, wealth, and prosperity. The ritual of giving a calendar to the people showed the responsibility and concern of the king (son of heaven) about every aspect of the people’s lives.

Today, the study and enacting royal rituals in the Imperial Citadel of Thang Long has attracted the attention of many researchers and visitors.

Speaking of these experimental activities, Professor of history Le Van Lan said: “the ritual of calendar offering to the king was clearly described in history records. The calendar demonstrates the level of civilization, the method of managing the country as well as showing the rules, discipline, and unity in all ceremonial, diplomatic, and production and working activities of the court and people, covering all the activities of the court and daily life. The study and enactment of the ritual of calendar offering to the king as well as the royal ceremonies in the Imperial Citadel of Thang Long need to be promoted in order to evoke the traditional cultural sources, to connect the past and the present, the tradition and contemporary, thereby encouraging young people’s interest in national culture”.

For more information at the online exhibition “Offering the calendar to the king on the occasion of welcoming the spring”, please go to our website at: trungbayonline.hoangthanhthanglong.vn.