General Giap (August 25, 1911 – October 4, 2013) was a close and outstanding student of President Ho Chi Minh. He was also widely regarded as the Big Brother of the Vietnam People’s Army.

On the occasion of the 110th birthday of General Giap (August 25, 1911 – August 25, 2021), Thang Long-Hanoi Heritage Conservation Center organizes an online exhibition “Võ Nguyên Giáp – the Legendary General”, in order to review the heroic revolutionary tradition of the Vietnam People’s Army associated with the legendary general. The exhibition also wishes to highlight the memories of General Vo Nguyen Giap at Building D67, a revolutionary relic associated with the activities of the Politburo and the Central Military Commission during the resistance war against the US.

Documentary photo: The extended Politburo meeting at Building D67 were determined to liberate the South and reunify the country

General Giap’s military career began in 1944, with the establishment of the Vietnam Propaganda and Liberation Army Brigade. From the first 34 soldiers “of civilian background”, the army under the leadership of Commander-in-Chief Vo Nguyen Giap in particular and that of the Party and President Ho Chi Minh in general, spent years “fighting in the siege” of the enemy and grew up after each battle and each campaign. They defeated the French colonialists at the Dien Bien Phu Battle in a victory that “resonated all the five continents and shook the whole world“.

After the Geneva Agreement, together with the highest leadership of the Party, President Ho Chi Minh, and the Politburo at the General Headquarters, General Giap continued to direct the commanders of the fronts and the entire army to step by step defeat and thwart the political and military plots of the US and the Republic of Vietnam administration, thereby contributing immensely to the successful liberation of the South and reunification of the country.

According to British military historian Peter Macdonald, from 1944 – 1975, Vo Nguyen Giap’s life was spent fighting battles and gaining victories, making him one of the greatest military leaders of all times. With 30 years as Commander-in-Chief and nearly 50 years as one of the top-level politicians, he proved to be a man of extraordinary qualities and stature in all areas of war. He was hardly matched in the art of combining guerrilla warfare with regular warfare. Such combination was unprecedented.

However, deep in his heart and mind, the Commander-in-Chief always believed that “the People’s Army of Vietnam both in the North and the South, as President Ho Chi Minh said, is a heroic army of a heroic nation… Any general, no matter how great his deeds are, is still only a drop of water in the sea. Only the Vietnamese people can defeat the US. You call me a legendary general, but I always consider myself equal to my soldiers.” 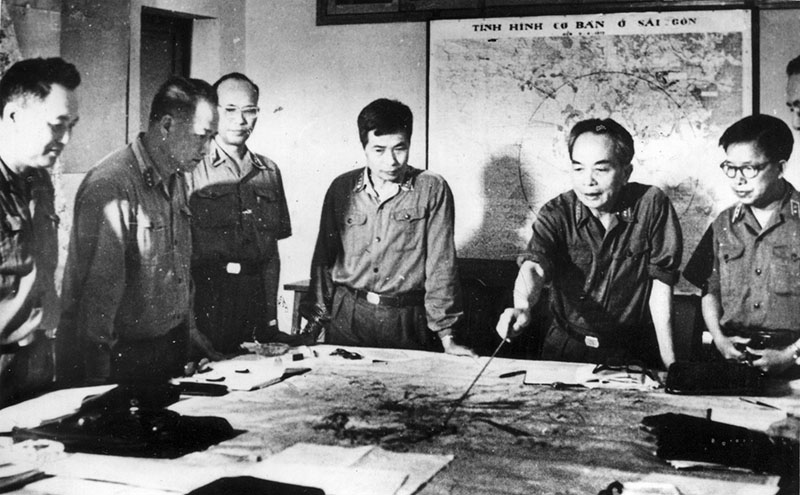 Documentary photo: At the General Headquarters, General Giap and his comrades in the Central Military Commission followed closely the rapid developments of the fronts, promptly giving appropriate instructions of attacking directions to the troops.

Online exhibition aims to pay tribute to General Vo Nguyen Giap’s great contributions to the cause of national liberation and to portray a staunch revolutionary soldier, an excellent and close aide of President Ho Chi Minh and the Big Brother of the Vietnam People’s Army. All his life, he followed President Ho Chi Minh’s teaching “Do your best to work” which he saw as a guide for all his actions. “I give every day of my life to the country,” he said.

The exhibition introduces 200 documents and images covering three themes: An Army whose soldiers are of civilian background; The Big Brother of the Vietnam People’s Army; The legacy of General Vo Nguyen Giap.

The exhibition highlights the roles played by General Vo Nguyen Giap at the Vietnam People’s Army Headquarters (Building and Bunker D67) from 1968 to 1975. During this period, together with the direction and consensus of the Party, Politburo and in his capacity as Secretary of the Central Military Commission, Minister of National Defense, Commander-in-Chief of the Vietnam People’s Army, General Vo Nguyen Giap regularly monitored the evolutions, developments in the southern battlefield and gave directions and orders that contributed to the final victory, liberating the South and reunifying the country.

The exhibition will be introduced online from 22 August, 2021 at the following website: trungbayonline.hoangthanhthanglong.vn