The real name of Hoang Dieu was Hoang Kim Tich. He was born on February 10th, 1829 in a family of Confucian tradition in the village of Xuan Dai (Dien Phuoc, Quang Nam). His family had seven sons, including one phó bảng (equal to Master), three Bachelors and two Graduates in exams under King Tu Duc’s reign. 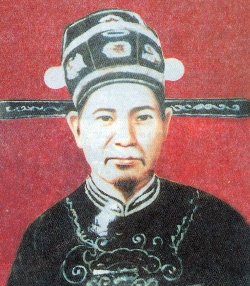 He was considered to be an honest, upright mandarin who was wholehearted to the people and achieved many merits.

After French captain Garnier and some soldiers occupying Hanoi Citadel were killed in ambushes led by Ton That Thuyet and Hoang Ta Viem, the French could not keep occupied Northern lands and were forced to sign the treaty to return Hanoi, Hai Duong, Ninh Binh and Nam Dinh provinces to Vietnam.  However, the intention to reoccupy Hanoi by the French was so clear that all the people could see.

Facing to the intention of France, defending Hanoi became an urgent, difficult and dangerous task. Such task was entrusted to Hoang Dieu by King Tu Duc.

Being appointed as Ha Ninh province chief, right after arriving in Hanoi, Hoang Dieu immediately embarked on the constructions, repaired and strengthened the fortifications as well as trained soldiers to fight against the enemy.

Realizing that the protection forces were not strong enough, Hoang Dieu called for help from the court many times. However, at that time, French army occupied the South of Vietnam; Hue Court was panic; the defeatist faction dominated the militant faction. Therefore, the petition of Hoang Dieu was not replied.

Knowing that Nguyen Dynasty was panic, France sought to invade the North. In 1882, with the pretext that the Vietnamese violated the 1873 Treaty to have relations with the Chinese and tolerate her military to hinder the movement of the French on Red River, France sent 400 soldiers under the command of Colonel Henri Rivière to the North. They garrisoned at Don Thuy (Water Station) 5km from Hanoi toward the north and were ready to take the orders. 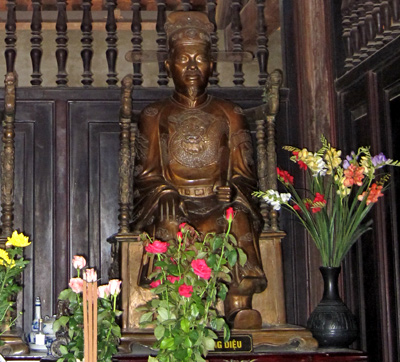 Knowing that the French are “playing games”, on the one hand, Hoang Dieu imposed a curfew in Hanoi Citadel, ordered surrounding provinces to be ready for fighting; on the other hand, he asked Hue Court to send reinforcements.

At that time, the king and defeatist faction were only worried that they would offend the French and could not preserve the throne and dynasty. To appease the French, King Tu Duc not only did not send more reinforcements, he also gave proclaimation to rebuke Hoang Dieu.

Clearly knowing that the morale of Hue Court had broken, on April 25th, 1882, Colonel Henri Rivière ordered the  gunboats to get close to Hanoi and sent an ultimatum demanding Province Chief Hoang Dieu to destroy the defence system in the citadel and disarm the soldiers; furthermore, at 8 o’clock, the officers in the citadel must be present and create conditions for the French to “inventory” the soldiers and weapons.

To avoid casualties, Hoang Dieu sent the provincial judge Ton That Thuyet to negotiate. However, Henri Rivière ignored. At 8h15, without seeing the mandarins to present, Henri Rivière ordered the gunboat to shell into the citadel to support the amphibious infantry.

Seeing the French artillery shelling into the citadel, Ton That Thuyet was so panic that he fled. Then, he came to the French and informed the situation of the citadel in an effort to look forward to the French’s support. Addtionally, he himself also wrote the petition to the king and blamed on Hoang Dieu, begged the French to appoint him as Ha Ninh Province Chief.

While Hanoi army was not be able to dress the ranks, French troops rushed into the citadel. Soldiers under Province Chief Hoang Dieu’s rule tried to run to escape.

Inspite of being determined to defense the citadel, under the powerful attack of the French army, the imperial forces became weaker; eventually, Hoang Dieu ordered the troops to dispersed to avoid casualties.

“The citadel is lost but I can not save; it is a shame to the Northern Citadel patriots. My death does not matter; I wish to follow Nguyen Tri Phuong to lay down. My King is so far away; my bloody eyes burn into tears, etc.”

Admiring the example of Ha Ninh Province Chief Hoang Dieu who would rather die than surrender the enemy, the people and Ha Noi Citadel feudal intellectuals set up an altar to worship him beside his predecessor Nguyen Tri Phuong at Trung Liet Temple on Dong Da hillock.

Ton That Thuyet – a well-known scholar pursuing the way against the French – mourned for the sacrifice of Hoang Dieu and composed parallel sentences, appraising his loyalty and bravery.

Today, the Hanoi’s authority and people respectfully name the road on the west of the ancient citadel, parallel to Nguyen Tri Phuong Street, after his name. His altar is also set beside that of Province Chief Nguyen Tri Phuong on the gazebo of North Gate which is open all the year round so that the people can come and burn grateful incense to the two heroes sacrificing themselves for Hanoi capital.