Home / Co Loa Citadel / Ratification of the master plan for the conservation, embellishment and promotion of the value of Cổ Loa Citadel relic site (scale: 1/2000)

The Government has promulgated Decision 1004/QĐ-TTg dated 3 July 2015 ratifying the master plan for the conservation, embellishment and promotion of the value of Cổ Loa Citadel relic site (scale: 1/2000). The scope of the master plan incorporates sites related to the Cổ Loa citadel and its vicinity on the territory of Cổ Loa, Dục Tú, Việt Hùng, Uy Nỗ communes, Đông Anh district, Hà Nội  covering about 860.4 hectares.

The Cổ Loa Citadel was listed as a national relic site by the Ministry of Culture and Information in 1962 and was recognized by the Government as a special national relic site in 2012. Cổ Loa used to be the centre of the civil and military capital of the state of Âu Lạc during the period of King An Dương. It was also the capital city of the monarchical state under the rule of Ngô Quyền. This is a site of especially important historical and cultural values, regarded by scholars as “the oldest and most substantial citadel with one of the most original architectural styles in the Vietnamese aged-old traditions of citadel construction”.

Currently, the relic site houses many types of original patrimony, tangible and intangible alike, which was associated with the early days of nation-building. The most typical relic that remains to date is the Cổ Loa Citadel which feature three rounds of walls namely inner wall, middle wall and outer wall (thành Nội, thành Trung và thành Ngoại), measuring about 16 kilometres. At the centre of the citadel is a complex of relics, including Đền Thượng (Thượng Temple), Đình Ngự triều (Court Communal House), Mỵ Châu Temple, and Bảo Sơn Pagoda, among others.

Cổ Loa is a site of long cultural tradition. The diversity and originality of Cổ Loa are manifested in terms of the history-humanity-ecology triangle of values. Therefore, the master plan aims to preserve the Cổ Loa Citadel along with the improvement of social well-being based on the above-mentioned triangle of value; preserve, and retain the authenticity and integrity of the standing monuments and underground relics as well as the overall historical, rural and agricultural environment; stabilize and improve the quality of life for the inhabitants of Cổ Loa. These are the core tools to fulfill the dual goals of preserving and promoting the historical and cultural values of Cổ Loa. Accordingly, the Cổ Loa relic site serves as an important space connecting major tourism routes such as the cultural landscape of Red River – West Lake – Ba Vì, the Hùng Temple – Mê Linh – Cổ Loa – Thăng Long Imperial Citadel – Sơn Tây – Luy Lâu ancient citadel. The site of Cổ Loa will gradually transform from a rural part of Hanoi city into a new model of “History-Ecology-Humanity Park” with tourism being its major economic sector. This is done along the line of protecting living heritage, cultural space, traditional village space and the lanndscape of Cổ Loa.

The details of the plan touches upon many aspects such as the size of the population, land use planning, relic conservation planning, spatial planning and urban design, the planning of technical infrastructure of the Cổ Loa site. Most noteworthy are the Project for the conservation, embellishment and promotion of the values of Cổ Loa, the investment regulations for the construction, conservation, embellishment and promotion of the value of the relic site with many specific programmes and an investment capital of about VND7,400 billion. This includes programmes in housing, evacuation and resettlement; preservation of the tangible and intangible values; development of infrastructure; preservation and exploitation of the urban landscape and natural values closely associated with the relic site; promotion of the values of the relic site and enhance its visibility; the guarantee of social well-being and the training of human resources; programmes for capacity building in management and expedition of investment. 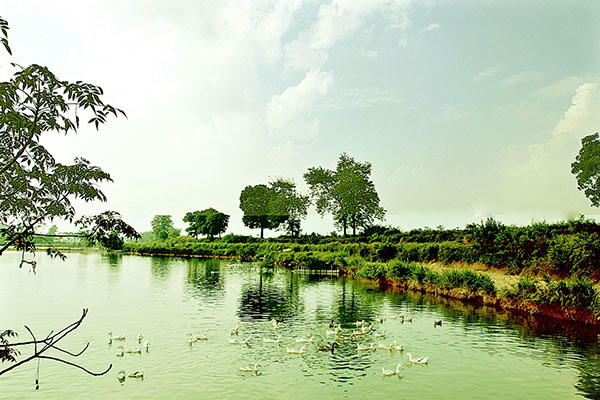 A section of the Outer Wall

The Government’s ratification of the master plan for the conservation, embellishment and promotion of the values of the Cổ Loa relic site (scale 1/2000) provides an important legal foundation for the gradual implementation of the programme and the project components towards the transformation of Cổ Loa Citadel into a History-Ecology-Humanity Park of Hanoi. This is also an important landmark that generates more favorable conditions for the people and authorities of Cổ Loa to gradually and sustainably preserve the unique cultural values of the region.