This is a key idea of the detailed master plan on preserving, embellishing and promoting the value of Thang Long – Hanoi Imperial Citadel Centre. 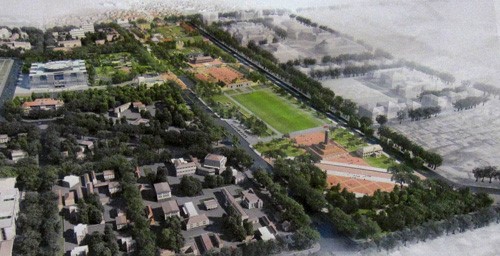 In the morning of 25 July, under the chairmanship of Chairman Nguyen The Thao, collective of the People’s Committee of Hanoi city has heard and contributed their ideas for the detailed master plan on preserving, embellishing and promoting the value of Thang Long – Hanoi Imperial Citadel Centre (scale 1/500).

Architect Vu Dinh Thanh – Deputy Director of Vietnam Institute of Architecture, Urban and Rural Planning, Chairman of Thang Long project, said the area for the project research is 18ha, including 18 Hoang Dieu area. The main objective of the project is to preserve and promote the long-term value as the longest historical material, invaluable evidence of formation of Vietnam’s capital.

Accordingly, the project focuses on researching Thang Long Imperial Citadel Centre under Nguyen dynasty, French domination and modern period; researching through materials on maps and identifying the history; evaluating monuments correlative with the other cultural heritages.

Accordingly, it is proposed in the plan that Dien Bien Phu street at the flag pole area and Lenin Park will be renovated to form a unified block, the area from the flag pole to Doan Mon will be a square space where the visitors will use it for waiting place for visit; the head office of Department of Operations at the area from Doan Mon to Kinh Thien palace will be removed to form a unified space block

It is also proposed in the plan that the Kinh Thien Palace’s foundation will be enlarged towards dismount some surrounding works to re-plan the Palace’s foundation in accordance with its historical value. The Princess’s Pagoda area will be planned to become a space for showing and maintaining antiques. At Cua Bac, two paths by ladder will be researched to be restored as Doan Mon…

Feedback for project planning, the delegates said that the preservation, embellishment and dismount works of the Planning which are proposed must be unified with approval made by UNESCO; It must supplement the plan on connecting tourism between the Imperial Citadel Centre with the other tourist attractions of the city as well as the plan on arranging service points for tourism. They are also in a divided mind that the treatment plan of superimposed border of the Northern route and the Eastern route of the National Assembly House is not mentioned in the Planning.

Presiding at the Meeting, Chairman of the People’s Committee of Hanoi city Nguyen The Thao said that an open principle shall be determined in the Planning to both promote the immediate value and have long term vision. It must point out which values are preserved in the short term, which works are restored and constructed in the long term. The view of the Municipal Chairman agreed with the approach and the conservation views, but the consultant is requested to combine in harmonious manner between conservation and development, between conservation, embellishment and promotion of vestige values.

Mr. Nguyen The Thao has stressed the determination of the list of works to be conserved, embellished, the works to be dismounted are very necessary, is content throughout the entire Planning. To do this, the criteria in the Planning must be built to be basis for boldly propose the typical valuable works to be conserved, as well as add new works to increase value for the whole relic area. On that basis, investment allocation, identification of resources must be made.

Chairman Nguyen The Thao said the reconstruction of Kinh Thien Palace is the policy approved by the city, capital source has been identified and is requested to be added and put into key tasks in the Planning.