The foundation of Au Lac State

According to the Complete History of Dai Viet, Au Lac State existed from 257 to 208 BC. But this book also notes that the resistance war against the Qin occurred in 214 BC and Tuong District established by the Qin was Viet country, i.e. Qin troops had captured Au Lac. However, the book also records the resistance war against the Trieu Dynasty by King An Duong Vuong from 210 to 208 BC. This is the confusion and conflict in our history, which historians are still working to verify. 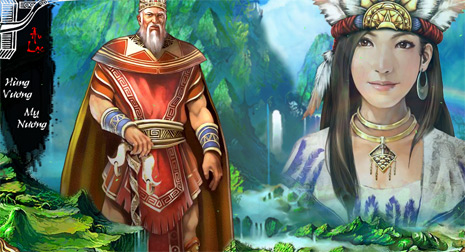 According to the hypothesis of the resistance war, the tribal alliance of Tay Au of Thuc Phan had close relationship with Van Lang State of Hung King. The exchange, link, struggle and conflict between the two ethnic groups close to each other in the bloodstream, geography, economy and culture were the basis and the preparation for the merge the two ethnic Viet – Tay Au groups to expand and develop Van Lang State. The resistance war against the Qin further boosted this trend.

When entering the country, Qin troops firstly invaded ​​Tay Au’s residence. Thuc Phan as a leader of Tay Au allied tribes, of course, organized and directed the resistance war against the Qin. The more Qin soldiers moved to the south, the more fierce resistance from both Tay Au and Lac Viet people they encountered. As required by the requirements of the war, the ancient Viet leaders proclaimed Thuc Phan as the highest commander.

The five to six years fight further strengthened the inherent unity between Tay Au and Lac Viet people. The glorious victory of the resistance reinforced and enhanced the prestige of Thuc Phan in Tay Au community as well as Lac Viet community.

All events taken place before and during the war against the Qin were the preparation for the foundation of Au Lac State to replace Van Lang State and transferred the throne from Hung King to An Duong Vuong Thuc Phan.

During the war, in fact, the community of Lac Viet – Tay Au was formed. However, the fact that Thuc Phan replaced Hung King, claimed himself An Duong Vuong and founded Au Lac State probably took place after the successful resistance. According to Đại Việt sử lược (Brief history of Dai Viet): “Hung King was defeated and replaced by King Thuc’s son whose name was Phan”. Another legend has it that, after many conflicts, at the end of Hung King, taking the advice of his son-in-law, Saint Tan Vien, the King ceded the throne to Thuc Phan.

Au Lac name consisted of two components (Tay Au, Au Viet) and Lac (Lac Viet), reflecting the alignment of the two groups of Lac Viet and Tay Au.  Under the reign of King Thuc, there were still Lạc hầu (civil mandarins) and localities were governed by Lạc tướng (martial mandarins). The territory of Au Lac was also expanded on the basis of the two territories of Van Lang and Tay Au. The foundation of Au Lac State was not the result of a war of annexation or destruction, but a fusion of land and residents of Lac Viet and Tay Au by Hung and Thuc States. Thus, Au Lac was a new development which was higher than Van Lang. Just so, not only Tay Au, but also Lac Viet and their descendants considered An Duong Vuong Thuc Phan was a great hero in the building and defending the country.

According to the Geography book of Co Loa, historians say that Au Lac only existed for a short time, i.e. nearly 30 years (about 208-179 BC).  Therefore, the lifetime of Au Lac was not considered a separate historical period, but a further development phase of Van Lang State in the same era: the era of founding the nation during Hung King and King An Duong Vuong time.

Economy, society, politics and culture during Au Lac time continued to develop on the basis of the achievements of Van Lang State. Dong Son culture was still the basis of the general culture of Van Lang and Au Lac, but there were new developments in various respects. Particularly, due to the urgent demands of the struggle against foreign aggression, in Au Lac time, military techniques advanced.

An important weapon improvement during this period was the invention named multi-arrow crossbow which could fire many arrows at the same time. This dangerous new weapon was regarded as “Deity crossbow” in folklore. In 1959, archaeologists discovered in Cau Vuc, the south of Co Loa, few hundred meters from the Outer Citadel, an armory with tens of thousands of brass arrows. The long arrows had tri-side heads. The arrows were also found in many other places with various designs.

A large labor construction and a famous military architecture representing many development targets of Au Lac was Co Loa Citadel.

Co Loa was in the plain contiguous to midland in Red River Basin, on the northern bank of Yellow River. Today, Yellow River is a river that has been filled and renovated into an irrigation canal. But according to the ancient geographical documents, Yellow River was a large river, connecting Red River to Cau River in Qua Cam – Tho Ha. On the map and in the field, traces of an old river were clear in Thiep River or Ngu Huyen Khe River (the River flowing through five districts: Yen Lang, Kim Anh, Dong Ngan, Yen Phong and Tien Du).

Co Loa was located among the plains in the center of the country and the hub of the waterway system with dense population and thriving economy. The movement of the capital to Co Loa, with such geography, transport and economy conditions demonstrated new development requirements of Au Lac. The capital of Au Lac could not be in the midlands anymore, but a center for all aspects of the country.

The demotic script (Ancient Vietnamese script) of Co Loa was chạ Chủ. Legend has it that when building a new capital, An Duong Vuong moved chạ Chủ’s residents to the end of the Yellow River alluvial land, explored the wilderness and established new villages. It’s Quay Village including Quay Ca, Quay Rao, Quay Con in Lien Ha Commune (Dong Anh, Hanoi). Co Loa Citadel was built on a land that had been explored and the villagers had resided for a long time.

Although there are many issues that need further research and discussion, but no one can deny that, Co Loa was firstly built by An Duong Vuong and served as the capital of Au Lac. There is also no doubt that after An Duong Vuong, Co Loa citadel was used, renovated and rebuilt by many authorities in different periods.

Co Loa Citadel was an indicator reflecting the development in many aspects of Au Lac under An Duong Vuong’s reign. It not only demonstrated the talent of creative labor, technical advances in construction, engineering and military arts of the ancient Vietnamese people, but also represented a new development of Au Lac State, social power and social differentiation.