The Ly-Tran Cultural Layer from the eleventh century to the fourteenth century was located on Dai La Cultural Layer. At this cultural layer, archaeologists have found column base pebble foundation, lotus-shaped stone pedestal, brick foundation layers, brick yards, drains, wells and especially types of large-size ornaments which were elaborately and beautifully carved on the architectural roof. 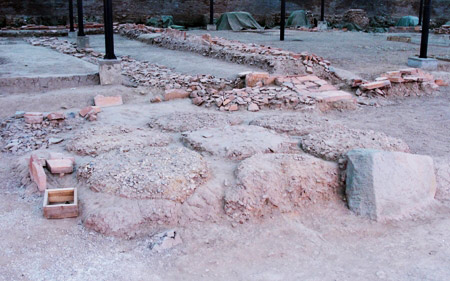 In Hole B16, archaeologists have discovered the remains of a 3 floor and 4 roof tower-shaped castle, located in an area of ​​approximately 1,000m2. This is the first construction of great size and values found so far in the Imperial Citadel.

Column base pebble foundation found in this cultural layer were mixed with clays. These pebble cells were usually square, each side of which was about 1.3 m; the depth was about 1 m. Pebbles had fairly equal size, equal to or larger than the big toe. A combination of 40 pebble cells arranged in 4 rows were found in the area which was planned to build the new National Assembly House. Archaeologists predict that these were rows of column base pebble foundation with two rows of main columns and two row of secondary columns. The distance between the main column and the secondary column was about 3 m, and the distance between the main columns was about 6m. These 40 pebble cells not all; the building on this system is definitely wider than 9 spaces (each row of pebble cell had 10 cells, equivalent to 9 spaces).

Adjacent to the multi-space building, archaeologists have found a piece of sewer running along the building. The sewer was built or arranged with bricks (absolutely no traces of adhesive mortar); the sewer was about 17 cm wide and 20 cm deep. In addition to the brick layer set horizontally to form the bottom, either side of the sewer was arranged with two layers of inclined bricks. The average size of the bricks was 36 x 20 x 5 cm. The bricks used here was dedicated to build sewers. Bricks for paving the bottom had trapezoid shape. The bricks placed on the two sides of the sewer had parallelogram shape. With such special shape, simply dig trenches and put the bricks down to form sewers. Toward the east, next to this sewer, there was a brick veranda of 0.76 m wide along the entire sewer. The bricks for paving the veranda were square bricks of 38 x 38 x 7cm.

In addition, archaeologists have also discovered many other column base foundation; among them, there were some intact stone pedestal. The pedestal were made of gray sandstone. The surface of the pedestal was carved with images of lotus petals in the Ly art style. The rim diameter of this lotus was 0.49 m. On the surface of many pedestal, there were clear traces showing that the diameter of the column was 0.43 m. However, at the position to erect the threshold girder, the pedestal surface was not curved with images of lotus petals.

In addition to the remains of permanent architectural buildings, ancillary constructions, archaeological excavations at 18 Hoang Dieu have also revealed a lot of valuable and rare artifacts in the Ly – Tran cultural layer. These includes relics of building materials such as bricks, tiles, ceramics, metal fittings for their daily needs and decorations in the palaces. We will introduce these artifacts in contents specialized about artifacts.