The top overlaying cultural layer revealed at 18 Hoang Dieu archaeological area is Le Dynasty cultural layer (XVth to XVIIIth centuries). At this cultural layer, archaeologists have discovered the remains of constructions built with wooden-hammer bricks mallet, well systems, bar tiles decorated with five claw dragons for roofing palaces and the royal pottery dedicated to the king and some metal utensils. 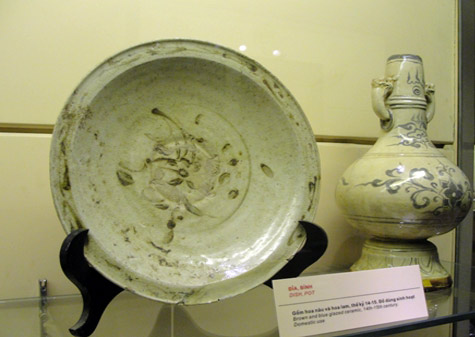 Pebble foundation under the Le Dynasty were reinforced with gravel but much more sketchy and at higher depth in comparion with that of the Ly-Tran Dynasties. In other words, the pebble foundation of the Le Dynasty was located higher than that of the Ly-Tran Dynasties. The pedestals were not carved with sophisicated lotus as the Ly – Tran. This can be explained as follows: during the Le Dynasty, Confucianism dominated the No. 1 position, Buddhism was not a religion monopoly.  Therefore, the symbol of lotus petals was not widely used anymore. Hence, column pedestals did not have the decoration image of lotus. It was merely a square stone, engraved with a circle on the surface to support the column.

Under Le Dynasty, white enamelled royal pottery was decorated with dragons with 5 powerful sharp claws, the word Quan at the centre, and high-level blue flower pottery painted with dragons and phoenix with very fine lines which are assessed to reach the pinnacle of perfection. Thin white ceramics under Le Dynasty were mostly small plates, of which the ceramic bone was as thin as egg shell; the decorations inside could be seen when the ceramics were illuminated through. Embossed five claw dragons were the symbol of the imperial dragon, a clear sign to show royal pottery. The word Quan in the middle of the disk can be understood as the product of the oven or that used for the king and mandarins. Because the pottery was manufactured with very thin ceramic bone, they were very light. Besides royal pottery with dragons with 5 powerful sharp claws dedicated to the king, at Hoang Dieu relics area, archeologists have also found a lot of pottery is decorated with phoenix bird pictures which were the belongings of queens.

In general, the archaeological remains found in the cultural layer under Le Dynasty reflect quite clearly the ideological rule of a Confucian society cult. It is shown through the style of decoration and distinctively disciplined carving.