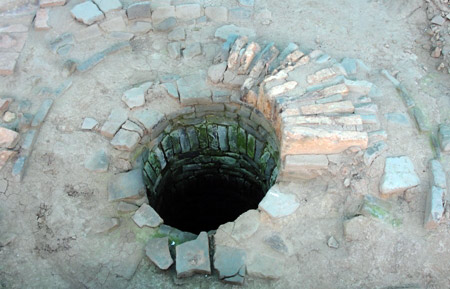 Quite a lot of artifacts of Dai La time are also found at this cultural layer in all 4 areas. They are rectangular bricks, square tiles, yin-yang tiles, tubular tiles, heads of tubular tiles decorated with holy beasts, buffon faces, architectural roofs decorated with big beast heads and ceramics. The characteristics of these types of archaeological remains are that they were made of dark gray clay; rare types were made of red clay.

Dai La wells were dug according to the order of Northen domination mandarins when they occupied in Dai La Citadel. Dai La wells found in 18 Hoang Dieu archaeological area had the depth of 5.9 m. The wells were built with good quality gray bricks; each vertical brick line was alternated with four horizontal brick lines. Dai La ancient wells were built by arranging bricks close to each other without using any cement material. This brick layout is often found in many ancient works. Most of the wells built during the Northen domination in Dai La were utilized by King Thai To Ly Cong Uan to save the national treasure and make convenient for moving the capital in a rush.