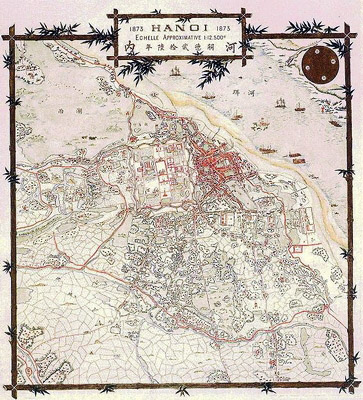 King Gia Long ordered to demolish Thang Long Forbidden Citadel and rebuild a new square citadel, mimicking the French Vauban style.  Each side was arranged with two forts; each corner had a corner fort. The outer wall had seven doors; above each door, there were a building and copper columns. Around the citadel, the mort system was conducted with water from To Lich River. The bridges over the mort were built with burnt bricks. Wall bottom was about 28m wide; wall surface was about 8m wide. On the surface of the wall, smaller walls were built for the military to hide and shoot down during the war.

In 1820 July, King Minh Mang added a number of constructions in Thang Long. He built more palaces, royal step-over paths and posting houses for mandarins from Kinh Bac up to Lang Son to receive Chinese envoys. In front of Kinh Thien Palace, King Minh Mang built Thi Trieu and Can Chanh Palaces. In the southern bank of Nhi river, built tiled houses to welcome envoys; in the northern bank, set seven embassy stations from Gia Quat to Lang Son. In the middle of the stations, a tiled house was built; the buildings in front, behide or besides were built with low-quality wood and tiled with straw grass.

Thus, during Nguyen Dynasty, though the imperial city was Hue, but Thang Long – Hanoi still existed as a large center of politics, economy, culture and society, highly respected by the court.