The 18 Hoàng Diệu Archaeological Site to the west of the Kính Thiên Palace is part and parcel of the Thăng Long- Hà Nội World Heritage Site.

Excavated in 2002 over the largest area to date, the site has revealed an exceedingly large volume of artifacts and relics. Apart from the alternating and overlapping architectural remains, there were millions of other objects found in deep under the ground. Of largest number were the construction and ornamental materials and royal utensils that testify to the development of Thăng Long as the capital city of Great Việt between the 11th and 18th centuries.

Traces of each historical period can be found in the Thăng Long Imperial Citadel, particularly through the immense volume of artifacts. This material evidence bears testimony to the long history of Thăng Long as a capital city. Let us take a look at the exhibition where some of the most typical artifacts unearthed on the site are on display, so we can have an idea of how skilled and talented the craftspeople of yore were.

Artifacts of the Đại La period found in the site were extremely diverse, indicating that this site was the administrative seat of the Annan Protectorate (An Nam đô hộ phủ) under the Chinese Tang dynasty. They also point to the fact that Thăng Long Citadel was built on the same ground as the Đại La Citadel by the Chinese governor Gao Pian (Cao Biền). Architectural materials discovered here include the yin-yang (convex and concave) tiles decorated with the faces of sacred animals, clowns and lotuses. Rectangular tiles were mostly dark grey, used to build water channels, water wells, paths or floor enforcements. The most typical tiles were inscribed with the Chinese characters “Jiangxi Army”, which was the name of an army under the Chinese Tang dynasty. Square-shaped tiles used for floors were also unearthed. They bear vivid, lively ornamental patterns, such as one featuring a crocodile swimming in the water or lotus reliefs and strings.

Foreign pottery was relatively diverse, such as celadon lion statuettes produce by the Xicun (Tây Thôn) Kiln in Guangdong, China, blue-glazed pottery, white-glazed wine bottles by the Changsha Kiln in Hunnan, China, the Chinese Tang dynasty of the 8th and 9th centuries. Especially noteworthy were the fragments of blue ceramics from Western Asia (Islam).

By the Đinh-Anterior Lê dynasties, although this site was not the national seat of power, traces of the capital city have also been found. The most typical of these findings were the bricks with Chinese inscriptions which read “Bricks used in the construction of Vietnamese military citadel” (“Đại Việt quốc quân thành chuyên”), ridge tiles adorned with mandarin duck statuettes and haloes. Besides ceramics of Chinese origin were the locally produced blue-glazed, the brown-flowered ceramics of the Thanh Lãng, Lũng Hòa in Vĩnh Phúc Province, terracotta of the Đương Xá Kiln in Bắc Ninh Province.

Lý-dynasty artifacts found in Thăng Long Imperial Citadel are extremely beautiful and delicate, reflecting a high stage of development. Many architectural materials decorated with dragons, phoenixes or reliefs and round statues in the shape of dragon heads, phoenix heads, or mandarin ducks with meticulous and sophisticated patterns give us an idea of how splendid the Lý-dynasty palaces were in Thăng Long. Square floor tiles were also meticulously decorated with stringed chrysanthemums, peonies and stringed lotuses. Large stone pillar foundations were engraved with lotus petals, indicating the substantial scope of the architectural monuments and buildings.

Lý-dynasty ceramics were of high quality, including celadon, white-glazed, yellow-glazed, green-glazed and brown-flowered ceramics used in many types of jars, bowls, dishes, basins, lotus-shaped dishes, lidded boxes, etc. Among these were some of the high-quality pottery items fashioned with great detail bearing dragon, lotus, chrysanthemum, good-wish patterns. One original example is the container’s lid of green enamel with a diameter of 18.5 cm featuring a curvy dragon, cloud-shaped gong, good-wish and dotted rim patterns.

Artifacts of the Trần dynasty unearthed in the heritage site were also diverse, having inherited from the preceding Lý dynasty. However, there were also elements of novelty such as the lime-flower decoration techniques, lotus-tipped tiles, leaf-tipped tiles, various types of reliefs and round statues with sturdy shapes typical of the free styles of the Trần era. The daily life inside the Thăng Long Citadel of the Trần dynasty was reflected through ample evidence from the royal utensils such as ceramic, metal and terracotta objects, etc. Extremely popular under the Trần dynasty was the large-sized brown-flowered ceramic with strong and free ornamental features.

Invaluable metalware like the scimitar inlaid with three precious metals was considered the treasure of the royal palaces while gold jewelry, areca knife, and lime pots reflected the multi-faceted royal life of the time. Brown-flowered terracotta jar decorated with stringed lotuses, brown-flowered basins adorned with birds and lotus pond, brown-flowered loudspeakers decorated with lotus engravings and coiled leaf strings are among the most typical and original artifacts of this period.

An important discovery that reflected the luxurious life in the Thăng Long Imperial Citadel of the Lê dynasty had to do with the ceramic collection produced in the Thăng Long Kiln known for the perfection and sophistication of the paper-thin ceramics and blue-glazed high-quality ceramics decorated with a five-clawed dragon and inscribed with the character “Mandarin” or “Reverence”, royal utensils. Most noteworthy were the ceramic tubular, dragon-shaped tiles describing dragons with scaled body sloping down the palace roof. This tile was found uniquely in Thăng Long, and it demonstrated the creativity and originality of the architectural decorative art of the Thăng Long Imperial Palaces under the Early Lê dynasty. A case in point was the collection of pottery used in Trường Lạc Palace which bore the characters Trường Lạc, Trường Lạc Palace, and Trường Lạc Storehouse.

Unlike the Mạc period, architectural materials of the Restored Lê were extremely diverse, including the likes of bricks, tiles, pillar foundation, steps, and sacred animal statues. Of largest numbers are the bricks and tiles, which were not glazed like in the Early Lê period but were mainly baked from two main types of soil: the red clay and the grey clay. The latter was more popular and resembled the materials of the Đại La period in colour. Typical examples include the leaf-tipped tiles whose heads were adorned with good-wish and geometric patterns. Pottery was also rich and diverse, exemplified by the teapot adorned with leaves, blue-glazed bowls bearing classical Chinese poems. An outstanding instance was the white-glazed statue of a woman made in the 17th century under the Restored Lê.

The vestiges of the 1300-year history found in the great depth of Thăng Long – Hà Nội are both of precious and mystic values. And the revelations of the archaeological treasure in Thăng Long Imperial Citadel have left indelible impression in the minds of the visitors. 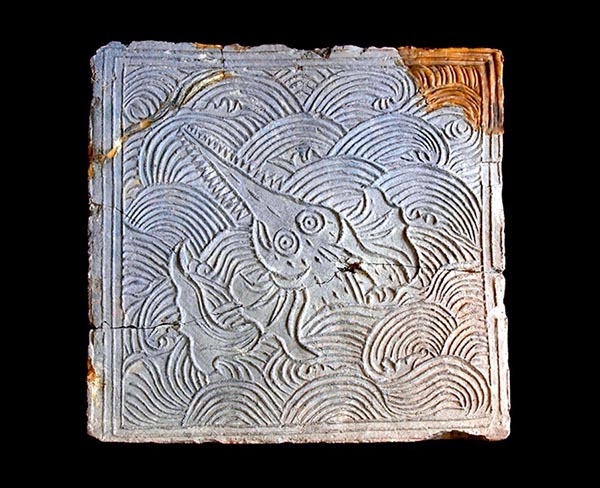 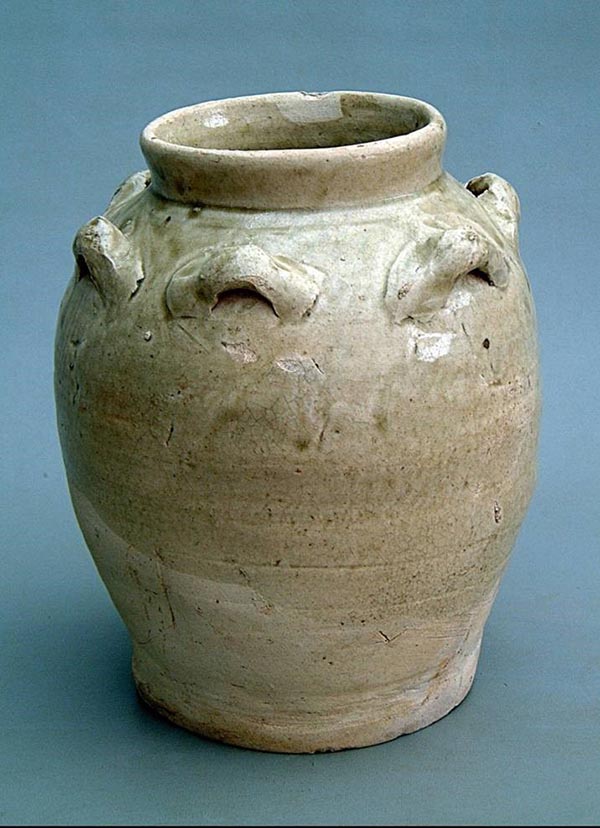 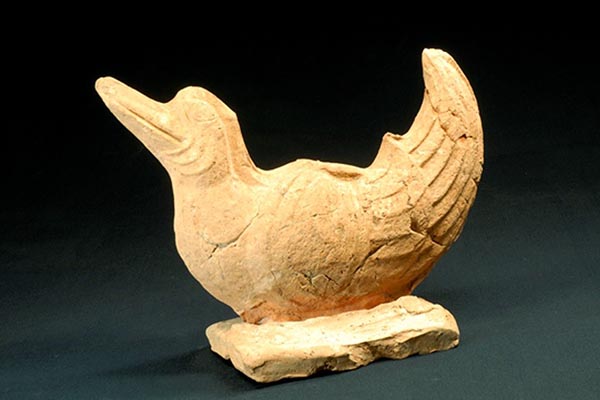 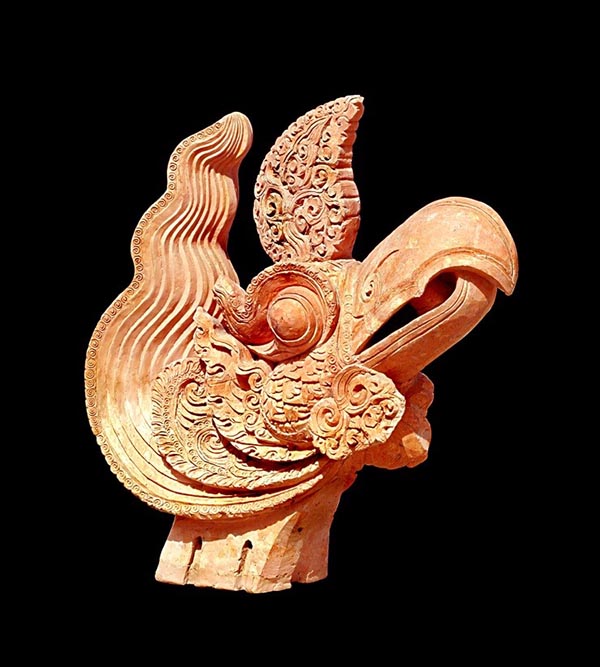 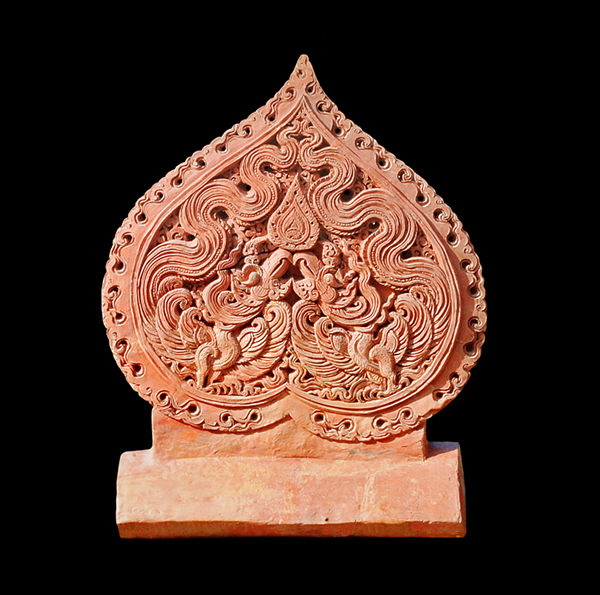 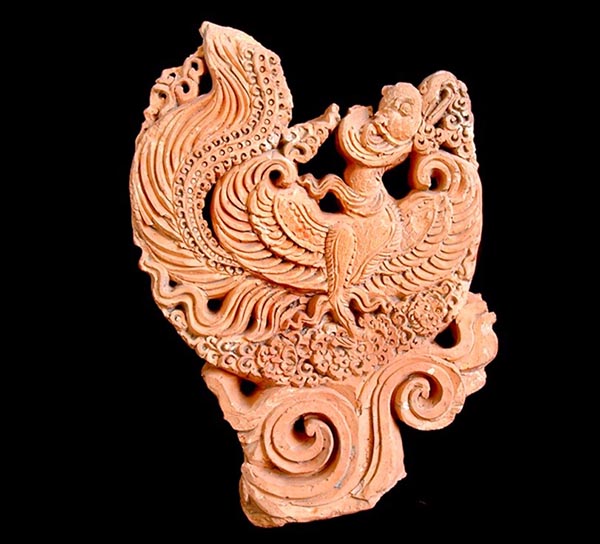 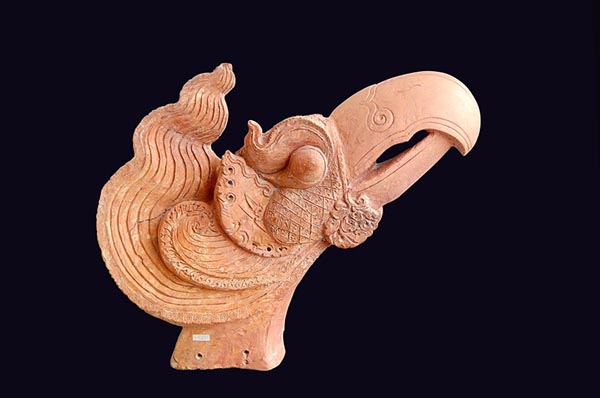 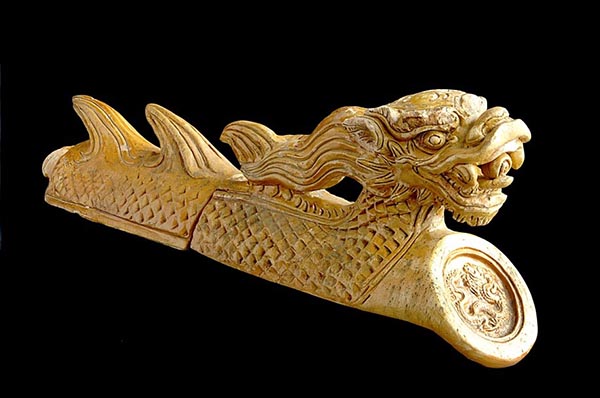 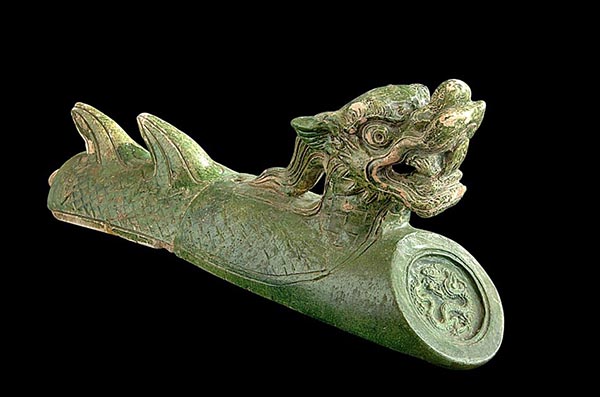 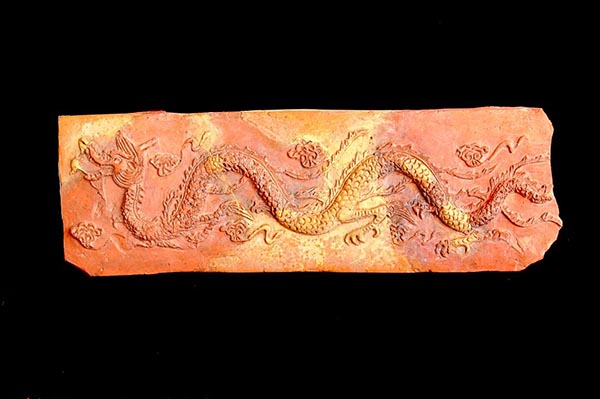 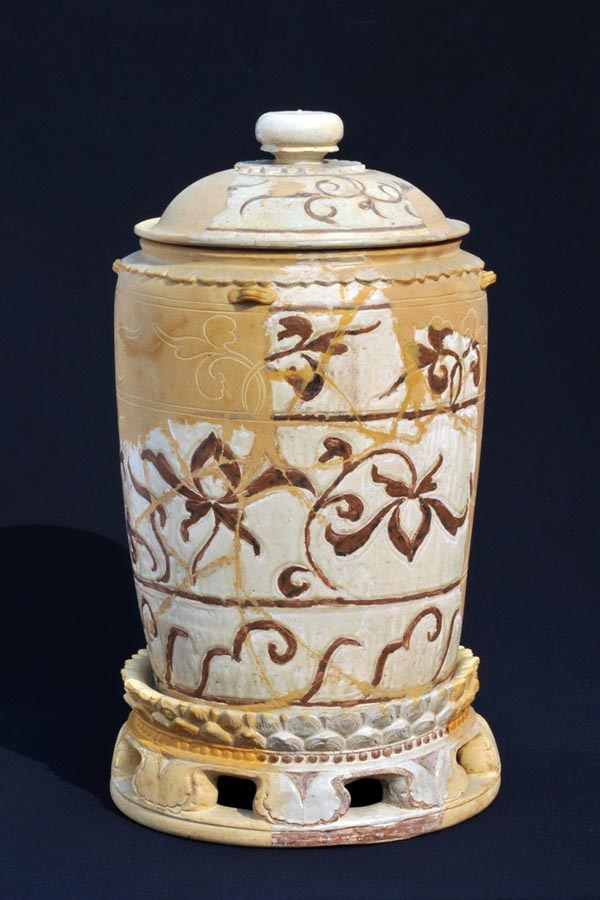 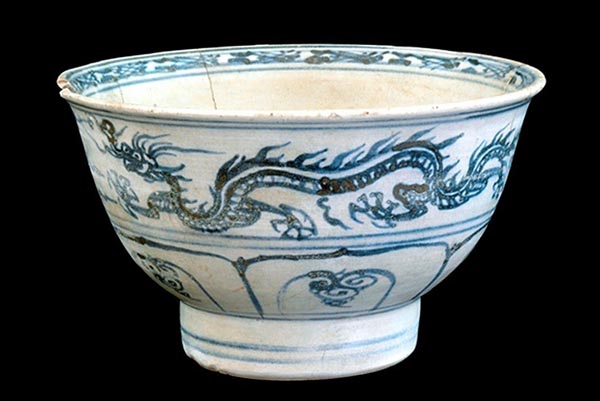 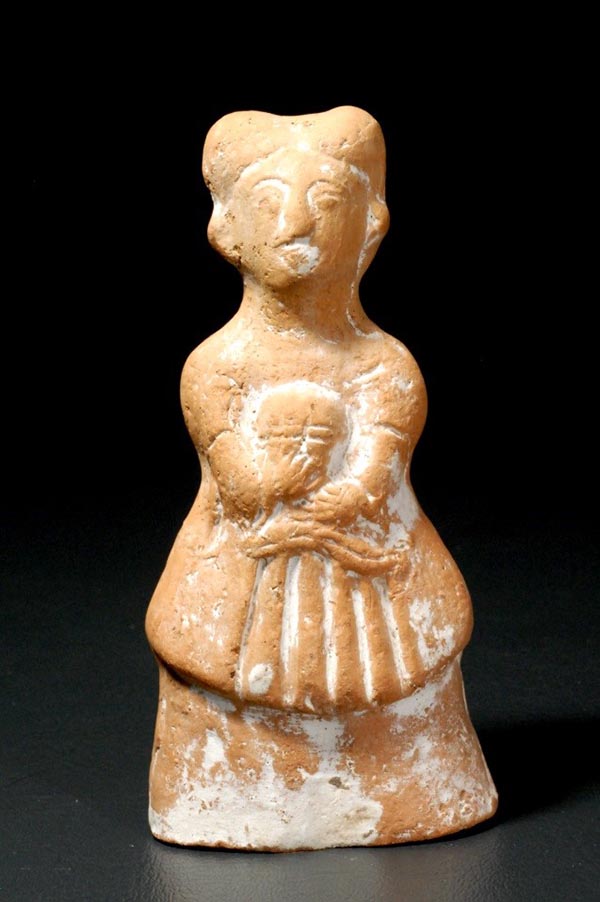 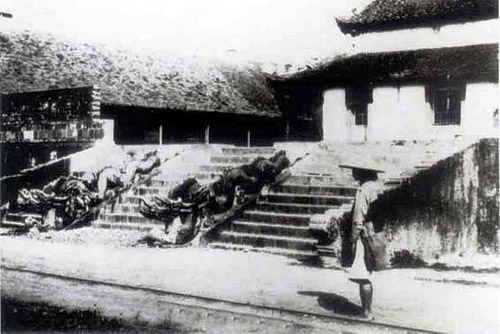