On 23 November 2015, the 70th anniversary of UNESCO will be held at Thăng Long Imperial Citadel – a world heritage site situated at the heart of Hanoi, the thousand-year-old capital city of Vietnam. This is an important event, marking a milestone in the cooperation between Vietnam and UNESCO, especially at a time when Vietnam has just been made a member of the Executive Committee of UNESCO of the 2015 – 2019 tenure. This is all the more meaningful when the event coincides with the Vietnamese Teachers’ Day on 20 November and Heritage Day on 23 November.

The event features a series of activities that range from exhibition of world heritage sites in Vietnam, a conference on the conservation and promotion of heritage values to the official ceremony held on the evening of 23 November 2015.

The United Nations Educational, Scientific and Cultural Organization (UNESCO), founded on 16 November 1945, is one of the biggest specialized agencies of the United Nations, which works to “contribute to peace and security by promoting collaboration among the nations through education, science and culture in order to further universal respect for justice, for the rule of law and for the human rights and fundamental freedoms which are reaffirmed for the peoples of the world, without distinction of race, gender, language or religion, by the Charter of the United Nations”. 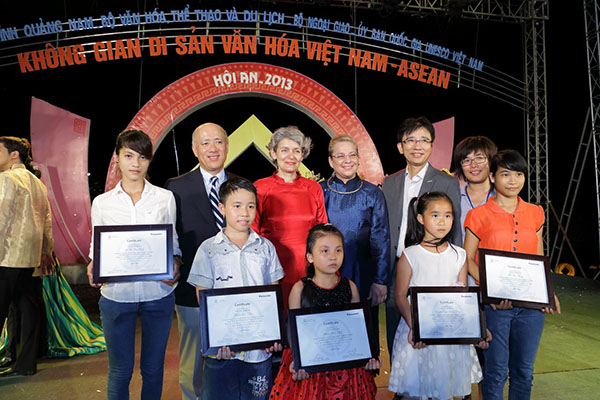 Prize-awarding ceremony for the competition “World Heritage in your Hand” held by UNESCO under the sponsor of Panasonic Vietnam (Hội An, June 2013).

UNESCO is a UN agency which works in various fields and sectors and touches upon many different aspects of development. Because of this feature, and thanks to the initiatives verified through pilot programmes and international legal tools, UNESCO has the ability to gather massive force and take leading role in many important international campaigns such as poverty reduction, education universalization, sustainable development, cultural conservation, environmental protection and peace education, among others.

The attractiveness and strength of UNESCO for peace and sustainable development stem from the mission given to the organization enshrined in its foundation agreement. With a flexible approach that varies from specialized to interdisciplinary, UNESCO has partly met the diverse needs of the state parties while enhancing mutual understanding and cohesion among nations. UNESCO is arguably a United Nations agency that has effectively accompanied projects that are indispensible to the cause of sustainable development. 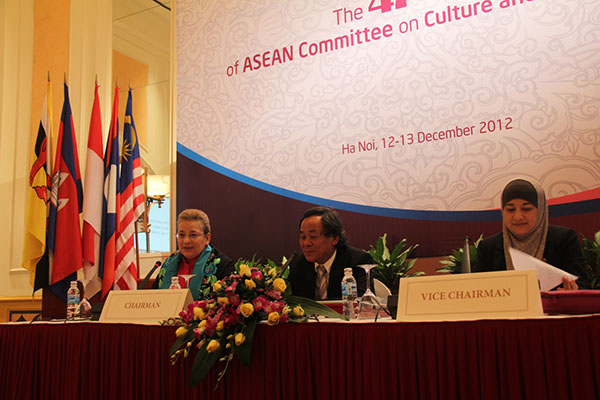 Mme Katherine Muller-Marin, Head and Representative of UNESCO Office in Vietnam, discussing the role of culture in sustainable development at the 47th session of the ASEAN Committee on Culture and Communications (Hanoi, December 2012)

In the field of education, since its inception, UNESCO has pursued a noble and human view of education worldwide in the hope of guaranteeing the right to education for all people, regardless of their race, sex, and economic conditions. It has always seen education as a driver of economic and sustainable development. As the sole UN agency in charge of education, UNESCO’s policy is to cover every aspect of education: i) development of education from kindergarten to tertiary level, including vocational and technical training, ii) non-formal education and iii) illiteracy eradication. Especially noteworthy is the fact that UNESCO has paid attention to the issue of equality in education, combining the instruction of knowledge and that of skills in different fields such as sustainable development, human rights, gender equality, accelerated education in underdeveloped countries and war-torn regions. 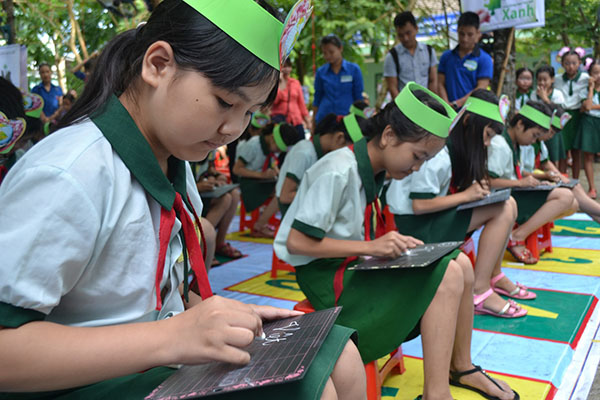 Students at Hương Long Primary School in Huế writing down their responses in the “Ringing the Golden Bell” contest on cultural heritage and sustainable development in Vietnam.

UNESCO is the only UN agency responsible for promoting science and, together with member countries and partners, using science for the sake of peace, human rights and sustainable development. Since its foundation, UNESCO has always functioned as a catalyst in the establishment of renowned scientific organizations and unions. It proposed two initiatives from the very first decades such as the Man and Biosphere Programme (MAB), the International Oceanographic Commission, and International Hydrological and Programme (IHP). UNESCO  regards social sciences and humanities as a Think-Tank that can mobilize the participation of all partners in order to devise appropriate policy tools to respond effectively to the fast changing society.

Vietnam became a member of UNESCO in 1976 and since then has worked closely with UNESCo through its network and organizations until a representative office was opened in Vietnam in September 1999. Vietnam has enjoyed an unprecedentedly high status and reputation after it successfully played its role as member of many different specialized and executive bodies of UNESCO. We have also been able to develop relations with many countries in UNESCO on the basis of mutual trust and support.

So far, Vietnam has counted eight world cultural and natural heritage sites, including the Complex of Huế Monuments (1993), the Ancient Town of Hội An (1999), Mỹ Sơn Sanctuary (1999), Thăng Long Imperial Citadel (2010), Citadel of the Hồ Dynasty (2011); the two natural heritage sites are Hạ Long Bay (1994), Phong Nha Kẻ Bàng National Park (2003) and 01 mixed heritage site called the Tràng An Landscape Complex (2014). Among these, there are sites that have been inscribed twice on the list for their exceptional values such as Hạ Long Bay and Phong Nha Kẻ Bàng National Park.

The achievements made in the cooperation with UNESCO have contributed to a lifted status of Vietnam in the international arena.