Home / News / The Bodhi leaf with carved phoenix, a national treasure of the Imperial Citadel of Thang Long

The Bodhi leaf with carved phoenix, a national treasure of the Imperial Citadel of Thang Long

The archaeological relic site of the Imperial Citadel of Thang Long has revealed thousands of precious artifacts, proving the history of ups and downs of the Thang Long Imperial Citadel. Over time, the relics under the ground still seem to sparkle with the aura of the citadel’s golden age. Many relics have become treasures to not only Vietnam but also to the whole mankind.

Among thousands of terracotta artifacts found in the Imperial Citadel of Thang Long, the Bodhi leaf with carved phoenix is outstanding and highly appreciated by researchers for its cultural, historical, fine art and sculpture values. The phoenix-carved Bodhi leaf has recently been recognized by the Government as a national treasure (the 10th batch in 2021). Its management code at Thang Long – Hanoi Heritage Conservation Center is 1.2002.1.2918. Its excavating registration code is BĐ02. A20L7. 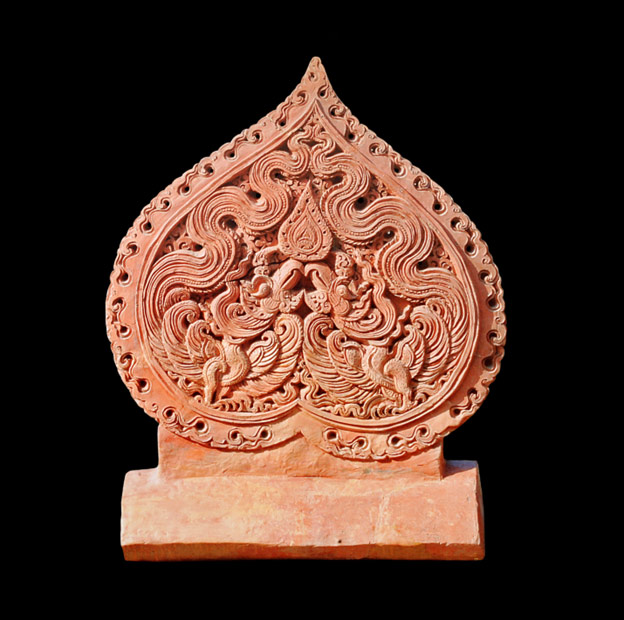 The phoenix-carved Bodhi leaf is made of terracotta, datingback  from the Ly dynasty, 11th – 12th centuries

The phoenix-carved Bodhi leaf of the Thang Long Imperial Citadel is the original artifact, found at Pit A20, 18 Hoang Dieu Archaeological Site (Ba Dinh – Hanoi) in stable stratigraphy, and discovered along with numerous other artifacts and vestiges of architectural foundations dating back to the Ly and Tran dynasties in the XI-XIII centuries.

According to the artifact profile, the leaf consists of 2 parts, the stem and the pedestal. The stem is shaped like a Bodhi leaf, a symbolic tree of Buddhism, and the two sides are carved with images of the phoenix. The size of the leaf stem is 77cm high and 74cm the widest. The thickness of the leaf is uneven: the bottom, adjacent to the pedestal, is thicker with an average thickness of about 8cm, and the thickness decreases toward the top with the thinnest part being about 5cm. The pedestal has a curved cross-section to match the roof tiles, so researchers believe that this is a type of ridge tiles. The pedestal is 65.5cmx34cm wide, 13cm high, the curve 8cm deep, 8cm thick on average. When it was discovered, the pedestal was broken and lost a number of pieces, now it has been restored to its original state.

The phoenix-carved Bodhi leaf is completely handmade, so it’s a unique product. This is a delicate work of art, showing the refinement and talent of the artists of the Ly Dynasty.

Its decorative patterns are very sophisticated and refined. The frill of the leaves has a fire motif. The flames are made up of many layers, the sparks are pulled upwards to create a lively feeling. The thickness in the frill is also created to match the rhythm of the flame and the multi-layer engraving technique creates a very vivid solid shape effect.

The center of the leaf is decorated with a pair of phoenixes offering jewels on the background of lotus flower and leaf. The image of a pair of phoenixes is shown in the posture of bouncing and offering jewels, with their heads held high, their bodies soft and elegant. All parts and details are hand-engraved with realistic lines that are meticulous, clear, vivid, and transformative. 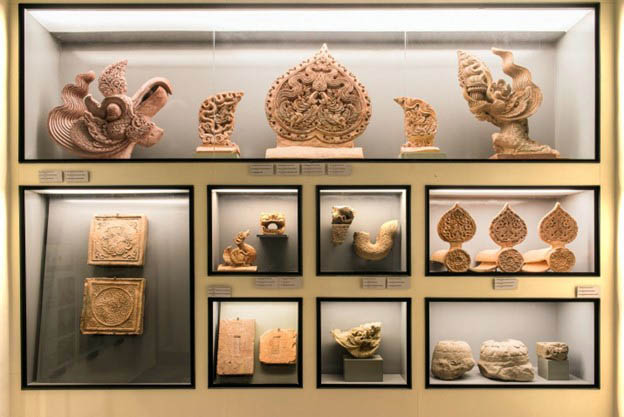 The Bodhi leaf is associated with Buddhism, so the artifact clearly shows the ideological influence of Buddhism in the decorative art of the Ly dynasty. The Bodhi tree is considered a sacred tree by religions such as Brahmin and Buddhism. Legend has it that Prince Siddhartha sat in meditation and attained enlightenment under the Bodhi tree, becoming Buddha Shakyamuni. Therefore, the Bodhi tree and its leaves are used as a symbol of Buddhism. The objects in the shape of the Bodhi leaf also contain symbolic meanings for Buddhism.

The phoenix is a highly symbolic mythical birds, originating from China and spreading to Vietnam, Japan, Korea, etc. Legend has it that this mythical bird symbolizes fire, the sun, justice, obedience, loyalty, and the southern constellations. It is the king of birds. The beautiful and graceful body of the phoenix is the combination of the beauty and elegance of all birds. The shape, color and song of the phoenix are all symbols of good qualities and characteristics. The appearance of the phoenix always heralds a good omen, marking the beginning of a new era of peace and prosperity.

According to researchers, the phoenix-carved Bodhi leaf could have been used to decorate the center of the roof of the palace because of its large size and symbolic meaning. This is a material of special importance to the study of art, architecture and thought of the Ly dynasty in particular and Dai Viet of the Ly-Tran dynasties in general.