“The Dragon Boat Festival: past and present” 2022 was opened at the Thang Long Imperial Citadel heritage site on June 1st, 2022 by Thang Long-Hanoi Heritage Conservation Center. The highlight of this program is experimenting with the fan ceremony in the ancient palace. 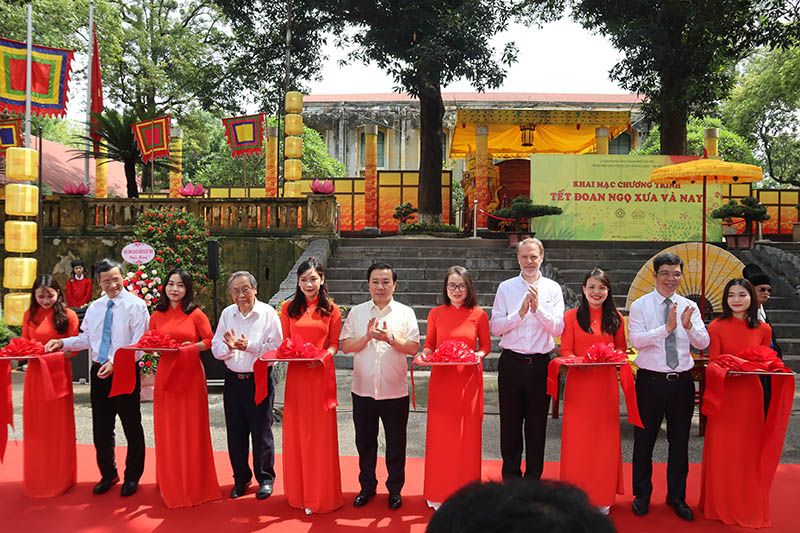 In the Le Dynasty, the king and court solemnly held ancestral sacrifice ceremonies and regular court ceremonies, bestowing banquets and fans to the mandarins, thus showing the authority of the heavenly son and also bearing profound human values. Rituals were held at Thai Mieu and Chi Kinh Palace. In the Dragon Boat Festival, there was a special ceremony where king proceeded to give fans to the mandarins. The ceremony of giving fans to the mandarins was held to show the authority of the heavenly son. To prepare for this ceremony, the court assigned the Ministry of Finance (bộ Hộ) to allocate wages to prepare the fans. Dao Xa village in Ngoc Cuc, Duong An, Thuong Hong district, former Hai Duong town (now Dao Quat village, Bai Say commune, An Thi district, Hung Yen province) was assigned the task of making fans. The fans after being finished were brought to the Temple of Literature and the king sent them to the Princes, the royal families, the literary and martial mandarins, the military barracks. In the hot weather of the Dragon Boat Festival, the ceremony of giving fans is an expression of the king’s special care for the mandarins. The king’s grace to bestow fans also has a profound meaning of bestowing “Blessings, Health, and Peace”.

The fan-giving ceremony was re-enacted at the courtyard of Kinh Thien Palace with the participation of Thang Long Cultural Heritage Association, Y Van Hien and many tourists.

Visiting the exhibition space, visitors also learn about the unique and long-standing folk customs such as the custom of killing insects, the custom of picking leaves to make medicine, the custom of wearing five-color charms; meet artisans and learn the process of making fans, folk cuisine and enjoy the taste of the Dragon Boat Festival… 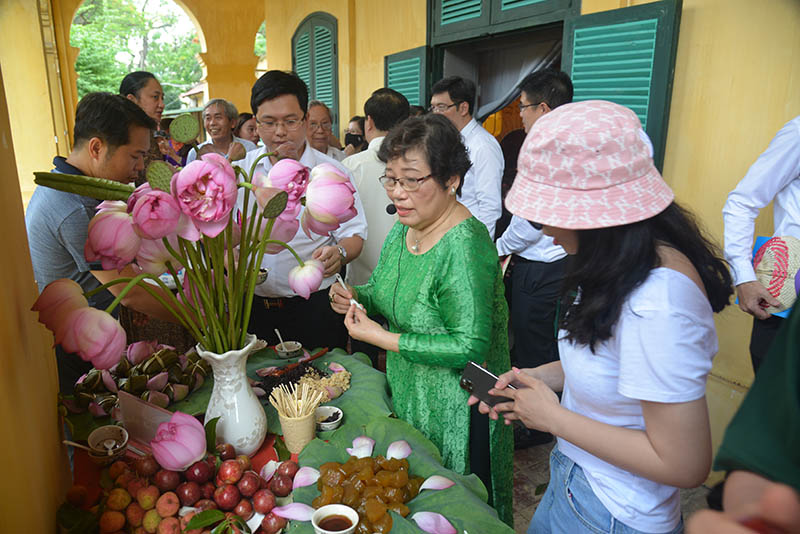 Speaking at the opening of the festival, Mr. Nguyen Thanh Quang said: This year’s Dragon Boat Festival is held to honor the nation’s cultural values and promote royal cultural values. We wish to bring visitors unique tourism products, imbued with traditional culture. The Dragon Boat Festival program will become an annual event held at the Imperial Citadel of Thang Long, contributing to the preservation and promotion of intangible cultural values and traditional education for the young generation.

Attending the program for the first time, Mr. Christian Manhart, UNESCO Representative in Vietnam expressed: I was told that the Dragon Boat Festival is a good traditional custom in Vietnam, an opportunity for people to remember their ancestors and maintain their healthy folk customs and practices during the transition from spring to summer. It is also an occasion to foster the link between tangible and intangible heritage – and only if we maintain this link and practice intangible heritage can we keep tangible heritage alive. The displaying and reenacting royal rituals during the Dragon Boat Festival at Thang Long Imperial Citadel is a very meaningful way to integrate tradition into the modern life of Vietnamese in general and young people in particular.

The Dragon Boat Festival is an opportunity to experiment with the results of many years of research by the Thang Long – Hanoi Heritage Conservation Center within the framework of the research program on the intangible cultural values of the heritage site, the values that create the soul of the Imperial Citadel of Thang Long.