At 20:30 (Brazilian local time) on 31 July 2010, 6:30 (Vietnamese local time) on 1 August 2010, the 34th meeting of the World Heritage Committee convening in Brasilia, capital city of Brasil voted to adopt the resolution recognizing the Central Sector of the Imperial Citadel of Thăng Lo ng – Hà Nội as a World Heritage Site. As the site celebrates its fifth year of inscription on UNESCO’s World Heritage List, let’s look back at the journey to become a world heritage site of this precious property.

Five years have swiftly passed, but memories are still fresh in the minds of those who directly contributed to the formulation of the dossier submitted to UNESCO when the sound of the hammer signaling the inscription of the site on the World Heritage List was clearly heard across the convention hall of the 34th World Heritage Committee meeting in Brasilia, Brazil. The Vietnamese delegation, which was made up of officials from the Ministry of Foreign Affairs, the Ministry of Culture, Sports and Tourism, the People’s Committee of Hanoi, burst into tears of joy, and their happiness was shared by friends and colleagues from other countries attending the meeting. The success of the inscription was firstly due to the immense outstanding universal value of the site itself and then the great efforts and perseverance that were made by the Hanoi’s authorities, specialized agencies, scientists, experts within Vietnam and beyond. Looking back on the journey to the World Heritage List, we feel all the more grateful to generations of founding fathers who painstakingly shape d and developed the culture of the nation and left behind for posterity a site of international caliber.

Between 2002- 2003, a large-scale archaeological excavation was conducted at 18 Hoàng Diệu street, revealing a whole array of extremely valuable relics that testify to the presence and longevity of Thăng Long –  Hà Nội throughout the course of over a thousand years. The scientists, domestic and foreign alike, were unanimous in their high opinion of the archaeological discovery regarding Thăng Long Imperial Citadel made at 18 Hoàng Diệu, asserting that this was an important discovery that was of paramount historical and cultural significance and could help further enhance the status of Vietnam as well as the sense of self-esteem among its people. By 2004, the Ancient Citadel of Hanoi, after many years closure, was finally transferred to the management of Hanoi People’s Committee. In October of the same year, the Ancient Citadel of Hanoi was open to the sightseeing public for the first time, making it one of the top tourist attractions of thousands of visitors inside and outside the country. Since then, mysteries of the central axis of the Thăng Long Forbidden City were gradually deciphered. Initial research findings by Vietnamese and foreign experts have confirmed the substantial scientific, historical and cultural values of this heritage site of special national importance.

The former Director-General of UNESCO, Mr. Koichiro Matsuura on his visit to the site on 17 July 2005 said that: This unique site is of special importance not only to Vietnam but also to humanity. According to the World Heritage Convention, Thăng Long Imperial Citadel stands very good chance of being inscribed on UNESCO World Heritage List.

It was from this moment that we Vietnamese started nurturing our hope of having a World Heritage Site at the heart of the thousand-year-old capital city Hanoi.

Difficulties in the process of dossier preparation

The nomination dossier was registered in September 2008 and officially submitted to UNESCO in January 2009.

With support from UNESCO, the Council of the Île-de-France region (French Republic), the Vietnam-Japan Joint Committee of Experts, more than ten delegations of leading international experts came to provide Vietnam with technical assistance in preparing the dossier. From our part, the Ministry of Culture, Sports and Tourism, Vietnam Academy of Social Sciences and the National Council on Cultural Heritage, Vietnam Association of Historical Science, Department of Cultural Heritage, Institute of Archaeology, Institute of Vietnamese Studies and Development Sciences, etc. also sent their best specialist teams to assist with the formulation of the dossier.

There were up to more than 10 drafts of the dossier before it was finalized and submitted on time. Although there was not ample time, this dossier was prepared very carefully and met UNESCO requirements in terms of both content and format according to domestic and foreign experts. It was then appraised according to the right timeline.

After receiving a feedback report from UNESCO’s Advisory Body ICOMOS, in the two months of June and July 2010, a group of experts under the lead of Prof. Phan Huy Lê (Chairman of Vietnam Association of Historical Science) started working at full speed, with the assistance of Prof. William Logan (Cultural Heritage Asia-Pacific Centre, Deakin University, Astralia), and other experts from France, Japan, and the Vietnam National Commission for UNESCO in order to justify the arguments made in the dossier and provided further explanations in defence of the dossier.

A well-written dossier, aided by strong commitments at governmental level in the field of heritage conservation, provided the Vietnamese delegation with a useful tool in our efforts to win international support for the dossier at the 34th meeting of the World Heritage Committee in Brasilia, Brazil. It was in Brasilia that the Vietnamese team met with the representatives of the member countries of the World Heritage Committee to give clearer explanations about the Outstanding Universal Value (OUV) and convince them of the integrity and authenticity of the site. As a result, at 20:30 (Brazilian local time) on 31 July 2010, 6:30 (Vietnamese local time) on 1 August 2010, the 34th meeting of the World Heritage Committee convening in Brasilia, capital city of Brazil voted to adopt the resolution recognizing the Central Sector of the Imperial Citadel of Thăng Lo ng – Hà Nội as a World Heritage Site without recourse to voting because we were able to gather more than two thirds of the necessary nods.

Expectations and the future of the world heritage site

The inscription of the Central Sector of the Imperial Citadel of Thăng Long-Hà Nội is a great pride for the people in Hanoi and the whole country at large. It also honours the thousand-year-old traditions of the capital city while opens up windows of opportunities for international cooperation in research, conservation and promotion of the site.

Since its addition to UNESCO World Heritage List, the site has undergone different phases of conservation, restitution and promotion under the management of the Thăng Long – Hà Nội Heritage Conservation Centre.

Right in 2010, the year of inscription, the site was given a large-scale overhaul, a nice, clean look and an uninterrupted view all the way from Đoan Môn (Main Gate) to Hậu Lâu (Ladies’ Pavilion) to serve sightseeing purposes. Investment was also made by the city’s authorities to build an elevated path above the underground remains of the archaeological site, which has been open since the millennial celebration of Thăng Long in 2010.

In subsequent years, the Centre continued to organize various events to enhance the visibility of the heritage site. Focus was given to thematic exhibitions to serve the general public and visitors during national holidays, collection of documentation and objects related to the operational bunker which was then opened to the public. Thăng Long Imperial Citadel has become a tourist attraction for visitors within Vietnam and without, especially the Vietnamese diasporic community on the occasion of Lunar New Year at the annual event of Spring in Homeland. The site is also used to organize major cultural events such as the 2014 Hanoi Book Fair, the 2015 Japanese Sakura Festival, the International Vesak Day, among others.

Attention has also been paid to in-depth research and conservation activities, with the highlight being the Master Plan for the Restitution of the Kính Thiên Palace, the Project for the Restoration of the Lantern Festival and the archaeological excavation according to an approved timeline.

The Centre has also accelerated professional tasks such as opening the site to visitors, expanding scientific research and international cooperation in the field of heritage conservation, developing a management plan for long-term conservation of the site, constructing a feasible organizational and managerial structure, coordinating with other agencies to conclude the transferrence of the remaining sections of the Hanoi Ancient Citadel from the Ministry of National Defence, enhancing the visibility of the site in various ways.

The achievements that have been made reconfirm the huge potential of the site and gradually meet the expectations of the general public about its future, that is transforming it into an attractive tourist destination of the capital city Hanoi. 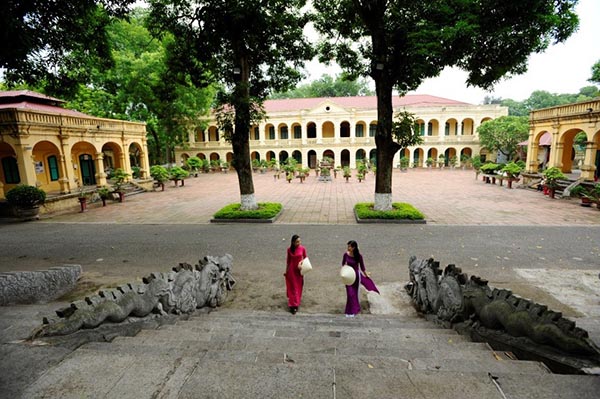 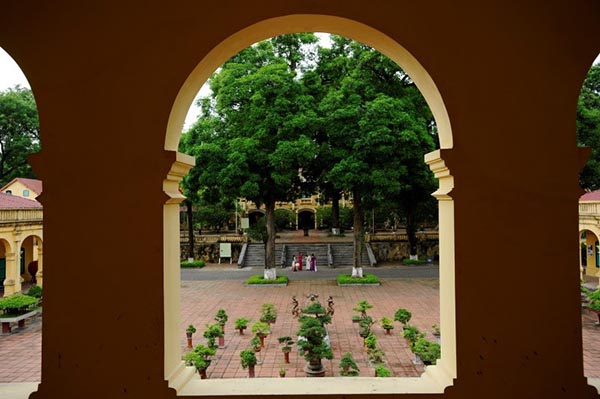 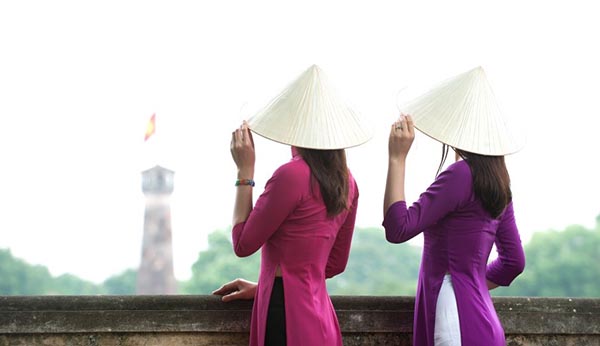 Looking to the Flag Tower of Hanoi 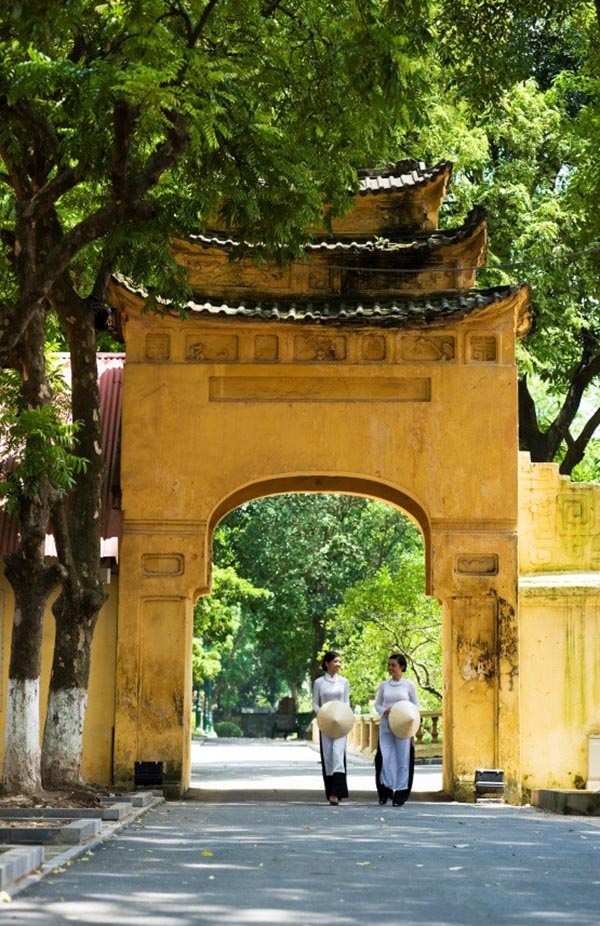 A gate of the Citadel built under the Nguyễn dynasty