Increasing the use of technology to better promote heritage value

“Lightning speed, boldness, surprise, and ensured safety” was the order given from Building D67 by the General Headquarters of the Vietnam People’s Army to all the fronts to help liberate the South in the Spring of 1975. That spirit was first actualized by the victory of Phước Long (6 January 1975) and peaked in March of the same year, with successive victories earned by the liberation campaigns of the Central Highlands, Trị thiên – Huế, Đà Nẵng and ultimately the historic Ho Chi Minh Campaign.

On the occasion of the 45th anniversary of the liberation of the South and reunification of the whole country, the Thăng Long – Hà Nội Heritage Conservation Centre launches an online exhibition and introduces a virtual 360-degree sightseeing tour about the D67 building and bunker located inside Thăng Long Imperial Citadel, with a view to helping visitors understand more deeply about the special historical values of these revolutionary relics.

Faced with the adverse impacts of Covid-19 on tourism, the Thăng Long Imperial Citadel management board has taken proactive measures to employ new technology and adapt its exhibition activities to changing circumstances to provide visitors with uninterrupted access to information. These measures have also connected the heritage with the sightseeing public to give them some idea of how their visits should be planned in the wake of the pandemic.

From their laptops or cell phones, visitors can easily access information about the historical highlights and events that took place at the Headquarters Building D67. It was from here that the most decisive directions and decisions of strategic significance as well as important orders were issued by the Politburo and the Central Military Commission to the whole army and people, encouraging them to advance speedily towards all the fronts in order to liberate the South and achieve complete victory.

The exhibition introduces to the audience more than 120 documentary images and objects under three main topics: new opportunities; “Lightning speed, boldness, surprise, and ensured safety”; the joy of victory. The online exhibition was officially commenced since 29 April 2020. 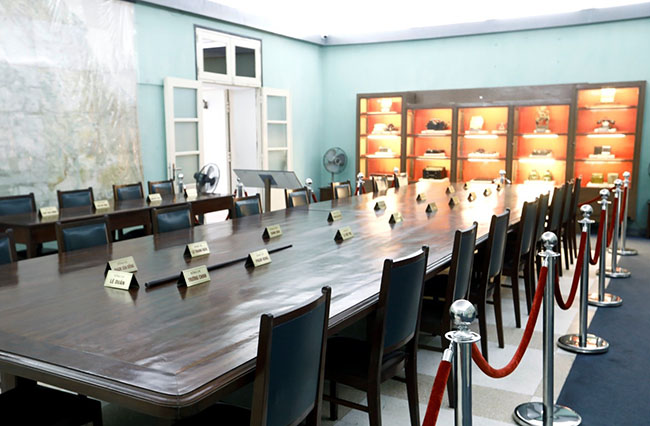 At the end of 1974, the Politburo and the Central Military Commission approved the decision to liberate the South in the space of two years, from 1975 to 1976. Particularly noteworthy was the fact that within about 75 days (8/1/1975 – 25/3/1975) the Politburo three times altered the strategic policy towards the liberation of the South, each alteration closely linked to major victories of the People’s Army on new fronts and lands of southern Vietnam that were gradually moving towards complete liberation.

The expanded meeting of the Politburo from 18/12/1974 to 8/1/1975, which discussed plans to liberate the South completely in the two years of 1975 – 1976, indicated that “if opportunities come at the beginning or the end of 1975, then the South can be immediately liberated within 1975”. This meeting was extremely important, as it helped to prepare strategic tactics and forces for the liberation of the South. The opening victory of Phước Long on 6/1/1975 was especially important in terms of “strategic reconnaissance”, helping the Politburo to give correct instructions for the subsequent directions of advancement of the General Uprising and Offensive of the Spring of 1975, starting with the Tây Nguyên Campaign whose first crucial battle was the attack on Buôn Mê Thuột.

After the defeat in Tây Nguyên, the Army of the Republic of Vietnam (ARVN) had to withdraw from Kon Tum, Pleiku, retreating completely from the entire Central Highlands to between Huế and Đà Nẵng and the central coastal plains. Given such developments, on 18/3/1975 at the Headquarters, the Politburo had another expanded meeting in which they decided that, given the fast-changing situations with the ARVN now weakened significantly, the strategic troops advancement should be transformed into the General Offensive. Most importantly, the Politburo made a resolution to “liberate the South in 1975” without waiting to 1976. The main strategic direction was Saigon. In the meantime, Trị-Thiên, Đà Nẵng was the important strategic direction.

By 25/3/1975, when Huế was about to be emancipated, the ARVN retreated to Danang, at Building 67 of the Headquarters, the Politburo immediately kick-started the expanded congress where they determined that the strategic opportunity had come. With each day now equaling 20 years, it was crucial to grab the opportunity and take prompt, bold and sudden actions. At the same time, the Politburo and the Central Military Commission made it a resolution to “Liberate the South before the rainy season” (or May 1975).

On  7/4/1975, at the Headquarters, on behalf of the Central Military Commission, General Võ Nguyên Giáp sent out a secret cable number 1574 to the entire army “Speed, ever greater speed. Daring, ever greater daring. Exploit every hour, every minute. Rush forward to the battlefront and liberate the South. Resolve to fight to secure total victory”. The cable was like a summon, an appeal and exhortation to the whole army so they would muster all their forces and strengths for the final battles. 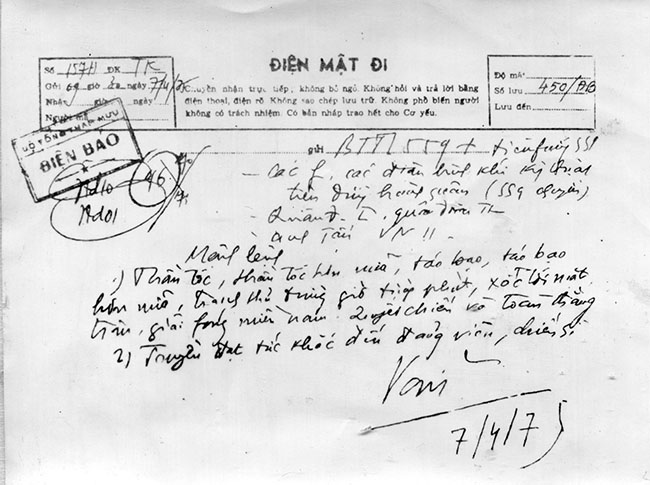 On the afternoon of 26/4/1975, from five directions (North, East, Southeast, West, Southwest), the liberation wings opened fire simultaneously, beginning the the historic Hồ Chí Minh Campaign. At 11h30’ on 30/4/1975 the Liberation Flag was flown high on the top of the Presidential Palace of the Republic of Vietnam, heralding the complete victory of the Hồ Chí Minh Campaign – the final campaign of the 1975 Spring General Uprising and Offensive and bringing to an end the Resistance War against the Americans which was full of hardship, sacrifice and glory of our army and people. 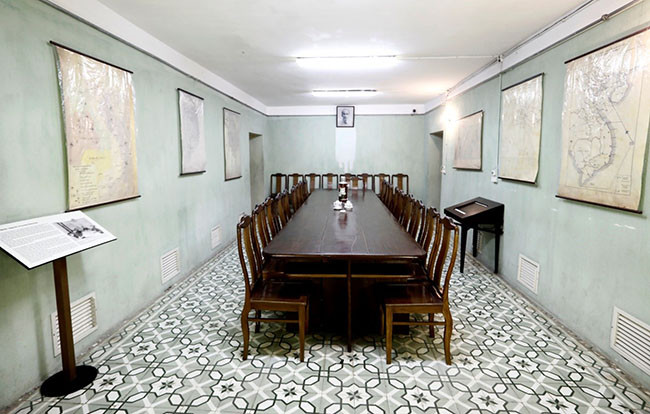 In support of the 360 degree sightseeing tour and online exhibtion, there is also the app QR CODE,  which helps visitors understand more about the most typical values of the relics through some of the most typical objects of the activities of the Politburo and Central Military Commission, General Võ Nguyên Giáp and General Văn Tiến Dũng who worked in Building D67 between 1967 and 1975.

On this occasion, the Thăng Long – Hà Nội Heritage Conservation Centre also works with book company Omega Việt Nam (Omega Plus), Dân trí Publishers to introduce to the audience special publication titled “The Headquarters (D67): a witness of the Hồ Chí Minh Era”. The book will be circulated and sold on the online book webs on the 45th anniversary of the liberation of the South and reunification of the country.

http://TrungBayOnline.HoangThanhThangLong.vn; http://trungbay360.hoangthanhthanglong.vn/ to view online exhibition and the 360 degree virtual tour of the D67 building and bunker.

2020-04-29
admin@
Share
Previous Discovering vestiges of a substantial architectural complex of the Lê Trung hưng (Restored Lê) period at the back of Kính Thiên Palace
Next Announcement: Reopening of Thăng Long Imperial Citadel and Cổ Loa Relic Site to serve the sightseeing public