According to the folk legend, Thuc Phan is the first one to set up the construction of Co Loa citadel with very much hardship, and completed it finally.

With many social researches conducted at home and abroad for the past decades, with increasing reliable documents, it is commonly acknowledged that Thuc Phan – King An Duong Vuong is “the head of Au Viet community from the mountainous areas of Viet Bac – Tay Bac along the Red river basin to the delta of Cha Chu – Co Loa”, “Thuc Phan is the leader of Tay Au people in the North part of Van Lang state”. 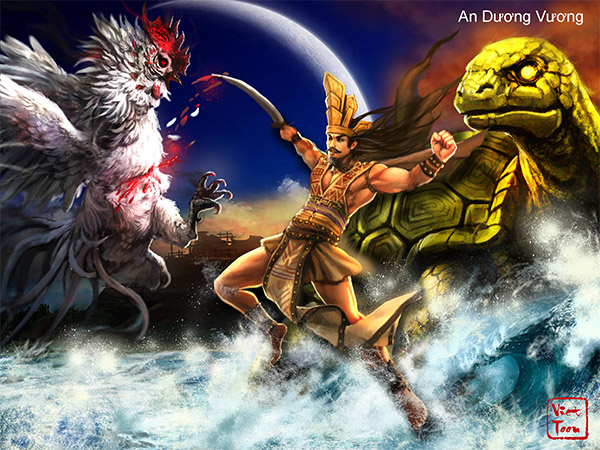 In the remind of Co Loa people, King Thuc Phan is “a mountainous native”, more specific as “a Cao Bang native”, “professional in hunting”, “skillful with bows and crossbows”. Therefore, Co Loa people make “bánh chưng tày” (long sticky rice cakes) not only in the annual festival of worshiping King An Duong Vuong, but also during the lunar new year.

In the emotion of Vietnamese, the image of Thuc Phan – King An Duong Vuong is reflected in the parallel sentences by Nguyen Tu Gian at Co Loa citadel:

While exploring the origin of Thuc clan, despite under different directions, researchers and historians share the same idea that history of all Hung kings and Thuc kings was recorded from “the era of national construction and defense”, and the loss of Hung Vuong kingship is not resulted from the loss of Hung Vuong nation.

Back in history, right after the country had been set up, our people had to consecutively cope with external threats. Folk legend tells many fights against various invaders such as Man invader, Mui Do invader, An invader, etc., which was certified in the period of Hung kings.

In the late years of Hung kings period, foreign invasion was a big threat. In China, Kou Chien, King of Yueh, after defeating Wu in 473 BC, became the sovereign in the coastal area from Shandong to Quangdong and ordered the envoy to go to Van Lang state for negotiation but refused by Hung king. This event is considered by Vietnamese historians to be the first clash between Vietnam and Dahan expansionism.

The legend on “Hong Bang clan” in the book “Lĩnh Nam chích quái” (selection of strange stories in Linh Nam) also reflects part of the contact and collision of the Vietnamese to Huaxia people in the North. The book notes “the Southern people were harassed by the Northern people, and could not enjoy their peaceful life as before…” The Qin state, found in 221 BC, expanded the big-scaled wars of conquest toward the North and South, establishing the first vast empire in the history of China. For the Southern, inheriting and developing the guideline “bình Bách Việt” (conquering Bach Viet) of the earlier Chu state, Qin Shi Huang ordered a 50,0000 strong army to go for invading the land of Bach Viet, located to the South of Chang Jiang. Thousands of Qin troop marched forward into the North and North East territories of Vietnam at that time. Meanwhile, the clans of Lac Viet and Au Viet (Tay Au), having some relation in blood, residing places, economy and culture, became closer to each other for the fight against the common enemy. According to the book Hoai Nam Tu, “At that time, Viet people (currently Vietnamese) run into forests to stay with animals instead of being caught by Qin troop”, and “They all agreed to appoint the most talented individual as the general for directing them to defeat the Qin troop at night”. That is the initial form of guerrilla, through which the Viet resistance force became growing, and the Qin troop was driven into danger and despair. On the prevailing advantage, Viet people gathered force and launched a big battle to destroy the enemy, defeated the whole Qin troop, killed the dominant general Tu Sui, resulting in the cancel of marching orders of Qin Dynasty. This is the first glorious victory of the whole Vietnamese people against the invasion of the Northern feudalist.

Through the battle, the role and reputation of Thuc Phan, the outstanding leader of the tribal alliance of Tay Au, not only was increased within the Tay Au tribe but also had a profound impact to the Lac Viet tribe. Therefore, after the fight ended in victory, Thuc Phan, with his reputation in the Lac Viet – Tay Au community, became the king instead of Hung king, proclaimed himself An Duong Vuong, and renamed the state to Au Lac. The Vietnamese historical book writes that “Hung King was defeated and occupied his throne by Prince Phan of Thuc state”, but folk legend says that after a series of conflicts, finally Hung King agreed on the advice of his son-in-law,  Tan Vien, to cede his throne to Thuc Phan.

It is very notable that with the construction of ramparts to turn Co Loa into the first capital of Vietnam, based on the central zone of Red River Delta, launching the fight against invasion, the image of Thuc Phan – King An Duong Vuong in Co Loa and other places nationwide has been told in the emotional, consistent & vivid legends (then recorded in the ancient bibliographies) and ingrained in the minds of Vietnamese life from generation to generation.

Upon the victory against Qin invader, An Duong Vuong had Cao Lo, his weaponry engineer, be responsible for building Co Loa citadel to consolidate the military defense. However, according to legend, the citadel collapsed after every time of construction. Then, St. Kim Quy appeared and crawled many rounds at the feet of citadel. King An Duong Vuong decided to order the construction in accordance with its footprints. Since then, the building did not shed any more. Besides, An Duong Vuong developed water troop and made numerous infantry weapons, creating strong military advantage for Co Loa.

Not long after that, Zhao Tuo from Nanhai district (currently Guangdong – China) came to invade Au Lac. Due to good military preparation, An Duong Vuong has resisted effectively. Zhao was forced to design insider by proposing the marriage between his son – Zhong Shi and An Duong Vuong’s daughter – My Chau. After exploring the military secret of An Duong Vuong through his son, Zhao Tuo succeeded in conquering Au Lac, forcing An Duong Vuong to flee and commit suicide, ending the period of An Duong Vuong.

About the end of An Duong Vuong’s Dynasty, there are different records. Most historical books reveal that An Duong Vuong lost his empire in 208 B.C. Vietnam  textbook based on the historical records by Tu Ma Thien writes that Au Lac state was ended in 179 B.C. The explanation is that according to historical book, Zhao Tuo destroyed Au Lac state “after the death of Empress”, in the year of 180 B.C, thus Au Lac was ended in around 179 B.C.

Although Au Lac state of King An Duong Vuong existed during the short time (nearly 30 years), it contributed greatly to the development of Vietnam history.

The research on An Duong Vuong and Au Lac state has been considered as an integrated part of the whole big matter of King Hung – King An Duong Vuong. That is “the initial time of national construction and defense”, relating to the origin of Vietnamese people, the development of Vietnam history, the recent decades and its future as well. Therefore, Thuc Phan – King An Duong Vuong and Au Lac state is a historical scientific research drew much attention by great Vietnamese historians for the past decades.