Tran Hung Dao, also known as Tran Quoc Tuan, was the son of Tran Lieu. Tran Lieu was elder brother of Tran Canh or King Tran Thai Tong, who robbed Tran Lieu’s wife. Tran Lieu asked his son to overthrow the throne. However, because of the national affairs, Tran Hung Dao did not follow his father’s instruction, put aside his own feud and devoted his life to combating the invaders. He had profound political, military and social thoughts of great values. 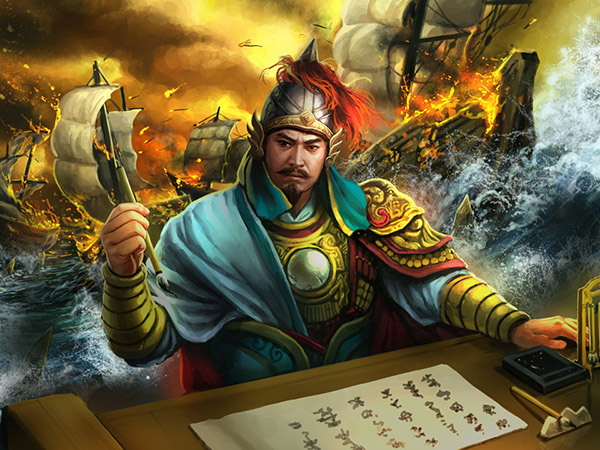 Tran Lieu and Tran Canh, two brothers, under the arrangement of Tran Thu Do, married two sisters Thuan Thien and Chieu Hoang, the daughters of King Ly Hue Tong. Tran Lieu was the elder brother, getting married to the elder sister Thuan Thien. Tran Canh was younger brother, getting married to the younger sister Chieu Hoang. Because King Ly Hue Tong did not have any son, Ly Chieu Hoang was chosen to succeed to the throne. As planned, Tran Thu Do arranged so that Chieu Hoang ceded the throne to her husband Tran Canh. That was the way of transferring of power from Ly Dynasty to Tran Dynasty.

Tran Canh succeeded to the throne, took the title of Tran Thai Tong and bestowed Chieu Hoang Chieu as Queen Chieu Thanh. After 8 years of getting married, Queen Chieu Thanh, at the age of 15, gave birth to Prince Tran Trinh. However, Tran Trinh unfortunately died early. It was untill 4 years later, Queen Chieu Thanh was not pregnant. Meanwhile, the wife of Tran Canh, Thuan Thien was pregnant. Tran Thu Do and his wife forced Tran Thai Tong to marry Princess Thuan Thien, who was his sister-in-law, to “prop him up later”. That was origin of the feud of wife robbery of Tran Lieu.

Because of the feud, Tran Lieu and his followers rose in rebellion in Cai River. Being an honourable person, Tran Thai Tong felt bored and lrft for Yen Tu Pagoda. Tran Thu Do tried to persuade the King but did not succeed. Finally, he said: “The place of the King is the place of the Court.” The monk in charge of Yen Tu Pagoda was appalled and begged King Tran Thai Tong to return to the Court. Reluctantly, King Thai Tong had to go back to the Imperial Citadel.

The revolt of Tran Lieu was quickly quelled. When Thai Tong was enjoying the view on Cai River, Tran Lieu pretended to be a fisherman, accessing the King’s boat and implored his younger brother not penalize him. Tran Thu standing nearby, unsheathed the sword to slash Tran Lieu to prevent aftermaths later. But Thai Tong quickly protected his brother; so Tran Lieu escaped death.

Tran Thai Tong not only forgave his brother but also handed perks and confered a royal title to Tran Lieu. Still, Tran Lieu felt animosity, determined to find good teachers to teach his son Tran Quoc Tuan.  Therefore, despite young age, Tran Quoc Tuan had a profound knowlegde of many aspects and was very good at martial arts. Before he died, Tran Lieu recommended Tran Quoc Tuan that “If you can not overthrow the throne, I will not rest in peace”. However, because he thoroughly understood moral philosophy, Tran Quoc Tuan was more aware of his responsibilities to the national affairs, the awarenesss of a loyal subject. Therefore, he chose not to follow the father’s will to avoid potential catastrophe to the residents. In contrast, he was devoted his life to improve the internal resources of the country before the eyeing of northern invaders.

Thorough military thoughts of Tran Hung Dao was that “king and mandarins agree, brothers live in harmony, all the people join forces together”. With this outstanding thought of people’s war, in the army of Tran Dynasty, there were talented generals descending from the servant class such as Pham Ngu Lao, Yet Kieu, Da Tuong, Ha Dac, Ha Chuong Nguyen The Loc,  Nguyen Dia Lo, etc.

The military strategy manipulated sucessfully by Tran Hung Dao was that “they depend on long-time battles, we rely on short-time ones; using short-time battles to repress long-time ones is an usual thing in the art of war.”