Complete Annals of Dai Viet (Dai Viet su ky toan thu), the first national history of the Vietnam feudal state shows that Trieu Da is a real character and has dedicated a chapter to write Trieu dynasty in which Trieu Da is considered as the founder of a new dynasty in our country. 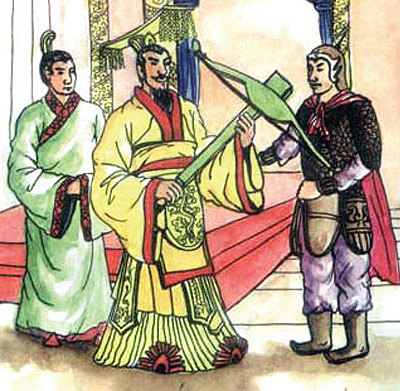 Naturally we can not accept the incorrect conception of former feudal historicist who considered that Trieu dynasty is a dynasty starting the King period of the country, but with 76 years living in the land of Viet state (from 213 to137 BC), it can confirm that Trieu Da character will still leave a deep impression in the cultural life of our nation.

After Tan Thuy Hoang’s death, Tan empire was shaky, four newly established districts in the South, in fact, escaped from the management and control of the central court. Dong Viet and Man Viet in Man Trung district uprisen to resist Tan, tried to restore the former country. Nham Ngao and Trieu Da conspired to lord over Nam Hai. Before his death, Nham Ngao invited Trieu Da to go to Phien Ngung (Guangzhou, Nam Hai), then entrusted the entire plot on lording over Nam Hai and appointed Trieu Da to manage Nam Hai on his behalf. Been entrusted by Nham Ngao, Trieu Da immediately occupied Nam Hai district, frontier passages and block the roads from the North, eliminated Tan dynasty’s dissident mandarins and replaced them with intimate and factional persons. Phien Ngung government became the lorded-over government of Trieu family.

The legend among common people in Co Loa citadel side told that when fighting the King An Duong Vuong, Trieu Da ordered to cross back Hong river and was stationed in the river terminal, at present it is final section at Dau village or  Luc Canh village (Xuan Canh, Dong Anh) and the end of Van Tinh village (Xuan Canh, Dong Anh), which is very close to Dau three-way crossroad (confluence of Duong river and Hong river). Many areas surrounding Co Loa such as Van Tinh village, Luc Canh village (Xuan Canh), Thac Qua (Duc Tu) worship Trieu Da. The legend has it that, Van Tinh village was a place where Trieu Da stationed the general headquarters, Luc Canh people cut grass for horse, loaded, served for the army. Therefore, Van Tinh was considered as main worship, other places were only considered as worship from a distance. The festival of Van Tinh village is organized from 6th to 8th March annually to commemorate Trieu Da. On 7th March, people of Luc Canh village receive graciously Trong Thuy statue to Van Tinh with the meaning of visiting father.

Upon failure of the King An Duong Vuong, Trieu Da merged all Au Lac’s land into Nam Viet state and divided Au Lac into two districts as Giao Chi and Cuu Chan under Nam Viet government’s domination in Phien Ngung (Guangzhou, Guangdong, China). However, basically, the administration policy of Trieu Da and then Trieu dynasty was very loose. At Giao Chi district and Cuu Chan district, Trieu Da appointed representatives to manage works in the district in which mainly implementing the tax regime under the contribution method.

Through old bibliographies of China and Vietnam, we know that Trieu Da and Trieu dynasty’s government integrated relative quickly with the life of Viet people, implemented many policies and clever methods to take advantage of Viet leaders, seek support from people. In addition, Trieu Da self-proclaimed as “Man Di the great elder,” took a Vietnamese wife according to Viet’s customs (bun, squat), to prove that he was a leader, a chieftain of Viet people. On the other hand, Trieu dynasty’s government also had the thought against Han Dynasty relatively strong. That was shown most clearly when our country was named Nam Viet (not Nam Han as Luu Cung group of the 10th century when Luong Quang region was integrated completely by Chinese culture) as well as self-control attitude, not acknowledge allegiance to Han dynasty. Thoughts against Han integration with Vietnamese community of Trieu Da was first derived from the interests of Trieu dynasty’s government, but that factor helped Trieu Da to win sympathy in the feelings, thoughts of Au Lac people.

That was shown most clearly when our country was named Nam Viet (not Nam Han as Luu Cung group of the 10th century when Luong Quang region was integrated completely by Chinese culture) as well as attitudes of autonomy, not acknowledge allegiance to Han dynasty. Trieu Da’s thoughts against Chinese and integration with Vietnamese community was first derived from the interests of Trieu dynasty’s the government, but that factor contributed to  help Trieu Da to win sympathy in the feelings, thoughts of Au Lac people.