Love story of Trong Thuy and Princess My Chau

According to old Vietnamese historical record “Dai Viet su ky toan thu”, beaten several times by An Duong Vuong, Trieu Da sent his son to Au Lac, plays a servant in An Duong Vuong’s imperial palace, then acting as imperial guard, proposed marriage to Princess My Chau. The King An Duong Vuong allowed Trong Thuy to take his dear daughter as a wife. 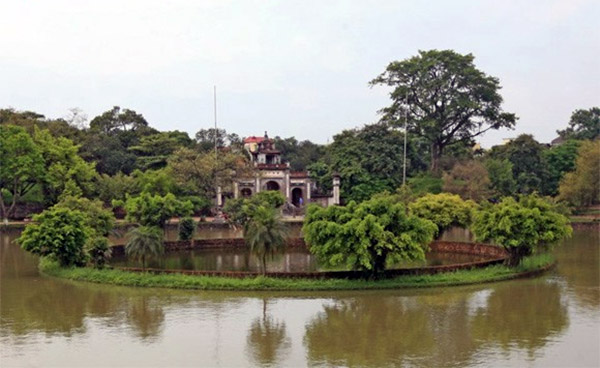 In a few days time Trieu Da rose troops to Au Lac headed by Trong Thuy, An Duong Vuong didn’t take precaution against because of having “magic crossbow”. When going out to battle, he realized that this is a fake one. The citadel at last was occupied, An Duong Vuong and his dear daughter ran away to the South.

The Princess remembered what she had told to her husband before they separated, so she took the fur coat along with her and marked the way with fur. An Duong Vuong woke up to reality, acknowledging that the enemy is his dear daughter. He drew sword out and cut off his daughter’s head then jumped into the water.  Trong Thuy at that time followed the mark and found his wife’s dead body, he burst out crying and buried her in the citadel. Finally, he jumped into the well where his wife usually washed her hair. 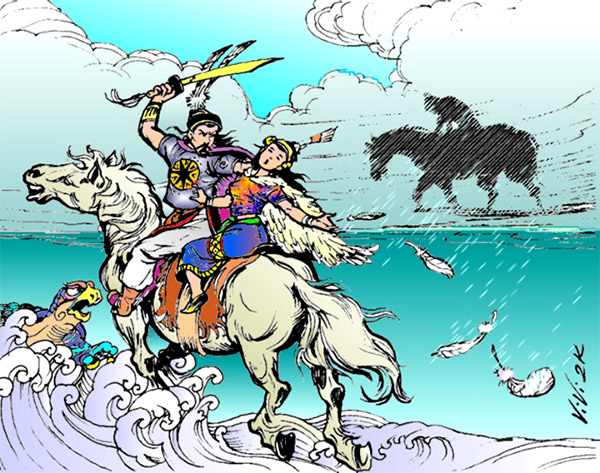 It is said that the love story of My Chau and Trong Thuy recorded in Vietnamese historical records was a legend for the purpose of explanation of An Duong Vuong defeat in the resistance against Trieu Dynasty 179 B.C. However, basing on study and analysis of various sources, the story is proved that it is not a legend.

Recently, archaeologists have excavated a tomb of Trieu Van Vuong, located in Guangzhou (Guangdong, China). On the basis of documents and relic which found, it is affirmed that Trieu Van Vuong (Trieu Muoi or Trieu Ho) succeed Trieu Vu Đe as king on year 137 B.C. Trieu Muoi of first paternal grandson of Trieu Da, first son of Trong Thuy (with the wife in Guangdong). Therefore, it is can be understood that in year 137 B.C, because of the death of Trong Thuy and died before his father, the throne belongs to first paternal grandson.

In “Tang Thuong Luc Ngau” made by Nguyen An and Pham Đinh Ho of century 18, recorded that Nguyen Cong Hang went to China and was asked by Thanh dynasty for giving back well of pearl washing. He well replied for breaking down the custom. Co Loa residents told that, in olden times, they paid tribute to China water of Pearl wall.

Collecting all materials, it is defined that Trong Thuy is a real person and the love story of My Chau and Trong Thuy have many actual factors.

Currently, we have not enough materials for verifying the above issues, but the reality is that the legend of My Chau – Trong Thuy and their love story has been reflected  in folk legend in Co Loa area.

Legend has it that, My Chau was killed by An Duong Vuong and was received help from Golden Tortoise, her soul is shown in boat of Pearl well. When deeing TRong Thuy, she sings “ You are not really love me”, Trong Thuy comes close and was immediately killed, his flow of blood was along to the Red river. Therefore, temples to Trieu Da and Trong Thuy were found along two side of Red river, such as in Luc Canh commune, Xuan Trach, Van Tinh. Many views shown that Trong Thuy was forced from his father, he didn’t want to do this. After An Duong Vuong defeated by Trieu Da and celebrated the victory, Trong Thuy missed her wife and cried beside the well: “Dieing together is worth, better living separately” and jumped into well to end his life.