On the occasion of the Year of the Rat 2020 and the 90th anniversary of the Communist Party of Vietnam, the Thăng Long – Hà Nội Heritage Conservation Centre works with relevant agencies and crafts to organize multiple traditional cultural and exhibition activities at the Thăng Long Imperial Citadel heritage site to serve the public demand for new year celebration.

For the Vietnamese people, Lunar New Year or simply Tết, is an important holiday, containing many wishes as well as good traditions and customs of the nation. The 2020 Vietnamese New Year program with the theme “Pen strokes of Spring” is held at Thang Long Imperial Citadel in order to recreate the millennial traditional cultural beauty of our forefathers. 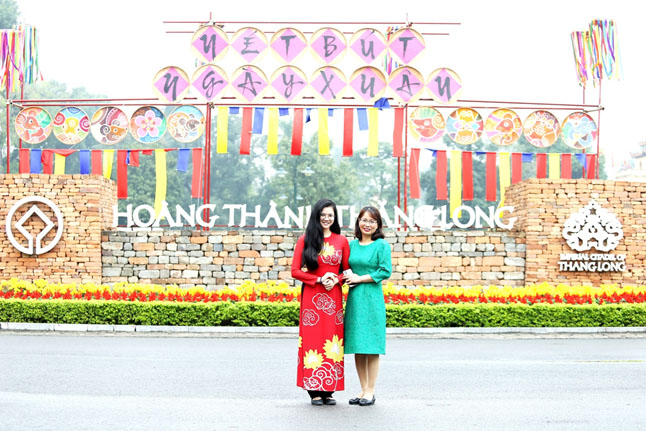 Decoration clusters under the theme “Pen strokes of spring”.

The main display image is the space of the Confucian scholar with the four treasures of the literary apartment, namely paper, ink, brush-pen, and ink-slab. That is not to mention many couplets with profound meanings, beautiful words and ideas expressed through talented and original calligraphy art. The exhibition introduces some of the beautiful customs still preserved to date such as the tradition of writing couplets, composing the first piece of the year, asking for and giving calligraphy characters in the first days of spring, all of which testify to the tradition of studiousness, respect for knowledge and the knowledgeable, while hoping for good luck, success and prosperity for everyone in the new year.

The exhibition space is redolent of the aged old tradition of reverence for teachers, knowledge and learning.

The outdoor decorative space features some salient clusters with conical hats, lanterns, pinwheels, couplets and characters, demonstrated in a multimodal and overflying manner with the use of different materials such as bamboo, rattan, paper which are all common and friendly to the environment. The exhibition space also serves well as a check-in place for visitors. 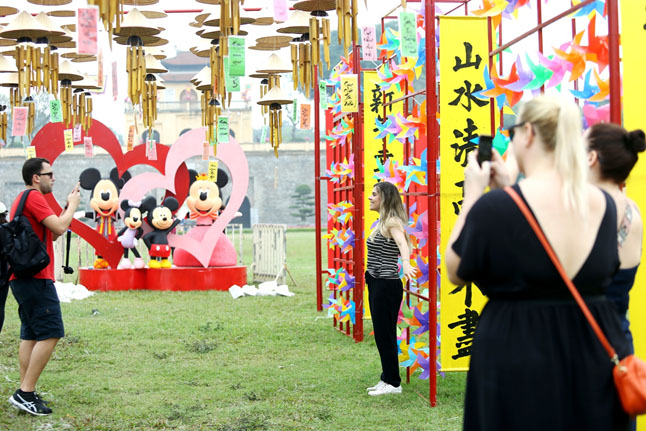 The Tết Programme also reserves ample space for children to enjoy themselves, exploring history, and for tradition education such as telling stories about Tết in the royal palace which is associated with the practice of first spring pen strokes and obtainment of calligraphy characters, or the conferral of New Year’s couplets for the poor people in the citadel of Thăng Long. The king would produce the first piece of writing and grant calligraphy characters on the first court meeting of the year together with grand mandarins who were best known for their abilities with words and characters. Coming to the site, children also will have an opportunity to experience calligraphy art, couplets writing, the making of bánh chưng, cards, paper flowers as well as other folk games, metal box games and graffiti.

Besides, in the area of Kính Thiên Palace, there will also be two thematic exhibitions titled “The Lý, Trần, Lê, Mạc ruling houses in the history of Thăng Long Imperial Citadel” and “The Dragon – royal court and regal power” in order to make systematic the historical documents and provide general interpretation of wise kings associated with some of the most glorious dynasties in history, consecutive dynasties that created an impressive and magnificent Thăng Long Citadel, a prolonged seat of power. The Dragon there symbolizes holiness and embodies the supreme power of the king.

This year, the heritage space also features many mini-scene, miniature landscape and colorful flower garden. The area of Đoan Môn stands out with a decorative cluster that is inspired by the idea of current flow, representing the uninterrupted development of everything. It also sees the presence of various types of flowers such as sunflowers, chrysanthemums and roses.

The area of Kính Thiên Palace is decorated with many species of elegant flowers such as orchid, camellia azalea, peony, and centenarian rose that gives the impression of nobility and solemnity.

The area of Hậu Lâu has turned into a colorful flower garden including peach blossom, the flower of spring. That’s not to mention hundreds of fragrant rose bushes.

During the New Year occasion, more than 500 rose bushes have been planted in Thăng Long Imperial Citadel, many of which are of very rare species such as the Đông Côi, Sapa, and white roses.

Visitors will also have a chance to experience the festive ambience of the spring and the radiating beauty of the capital city as a land of thousand-year-old culture. They will learn how the Vietnamese people see off the old year and the usher in the new one through many traditional cultural practices that have been restored such as the erection of the New Year’s Tree (cây Nêu), the worshipping of Kitchen Gods, the release of carps, the ablution of votive objects, the new year’s offering of incense.

Research activities that re-presents the traditional rituals in both royal and popular lives on the occasion of the Lunar New Year at Thăng Long Imperial Citadel has contributed to visitors’ enhanced understanding of national cultural values and visibility of the heritage site.