Tran Thanh Tong was the second king of Tran Dynasty whose taboo name was Tran Hoang. Le Tac, a chinese historian described Tran Thanh Tong as “the second son of king Thai Vuong, who is elegant and cultured”. 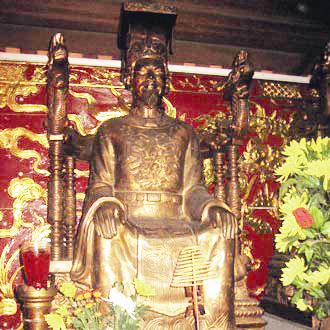 According to records of Vietnamese and Chinese historians, Tran Thanh Tong was a flexibile, but also very determined the king in diplomacy.

At that time, the Yuan had taken over people of the Song Dynasty. When Tran Thanh Tong acceded to the throne, Yuan Dynasty sent messengers to confer the title of the King. They forced Dai Viet to pay tribute including artists, doctors, fortune-tellers, astrologers and skilled artisans, each with 3 people and many other kinds of rare animals and products. They required to appoint the supervisor mandarin who was free to go around and supervise Dai Viet. Because he had just acceded to the throne and the forces were not powerful enough, Thanh Tong patiently accepted. He pretended to acknowledge accept, but in fact, Thanh Tong was devoted to preparing military forces to be ready for military confrontation with Yuan army when he rejected their claims later.

The rejection to the Yuan started from 1266. After waiting for the tribute of Dai Viet for a long time, Yuan King sent envoys to urge. Then Thanh Tong asked for the abrogation of human tribute and the abolition of supervisor mandarin. Yuan King agreed with the abrogation of human tribute but wanted to maintain the position of supervisor mandarin. Yuan King also set up regulations forcing Dai Viet’s King to attend audience, send royal members to Mongolia as hostages, obey compulsory military service and pay taxes. Thanh Tong refused. In 1271, Kublai Khan changed the official name of his country as Great Yuan, asked Tran Thanh Tong to attend audience. Thanh Tong resposed that he was sick and could not go. Kublai Khan then sent messengers to ask about the copper column Ma Vien buried before. Tong said that the column was lost.

Thus, during this period, Tran Thanh Tong always resolutely refused the Yuan king’s excessive demands in flexible ways. His policy continued to be followed by his son, Tran Nhan Tong.

Determined with the enemy outside, but Tran Thanh Tong wholeheartedly love the people. He was very keen on teaching the people, encouraged the education among the population. Tran Thanh Tong asked the royal members to gather the poor and help them break fresh ground, set up farms and provide them with the accommodation. Thus, under Thanh Tong’s reign, the people lived in peace; the people were undisturbed to do business everywhere.

Because of being highly respected the good deeds, Thanh Tong also loved his royal family members. He often said to them that “the country is descended from the previous generations, all of us should enjoy the prosperity together”. Therefore, he did not keep inflexible protocal between the king and mandarins. Thanh Tong just kept the protocal during giving the audience. For the rest of time, he invited the royal family members to eat and sleep with him which was very friendly.

In general, the spirit of love and respect of Tran Dynasty was highly heightened; therefore, many feuds among royal members could be resolved which helped to unify them. It was an invincible strength and was the root of the military resounding victory against the the Yuan army. The powerful Yuan army annexed the vast region of Song Dynasty, but had to stop when they reached the Dai Viet territory.

2013-08-20
admin@
Share
Previous Tran Hung Dao put aside his own feud and devoted his life to the country
Next Ly Thanh Tong, King – heightened compassion